Bicycle Fixation Weblog
Home » Archives » November 2008 » Trevor Wong update
Friday, November 28th
Trevor Wong update
Now that I have a bike with a pop-top stem, I can play a bit with handlebars. And so, here's a photo of Trevor Wong, my "Pseudobecane" fixie project, wearing a pair of cut-down Nitto B-603 "Promenade" handlebars: 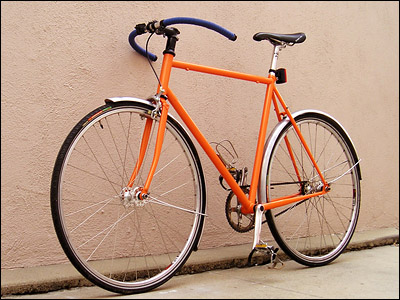 As you can see, even cut down, the Promenades are audaciously long. (We removed about two inches when they were on Gina's "Milk Runner" project.) I'm not sure what Nitto's market is for these, since even cut down they are too long for me; I rarely have my hands on the straight part of the bars.

Nevertheless, I'm trying them out, as I wish to put wither a porteur-type rack or a basket on the front end of this bike, and the drops and bullhorns I prefer would interfere with a bulky load--after carrying a microwave oven in a messenger bag a couple of weeks ago, I decided I really really wanted an alternative for bulky loads. I'm not sure that these bars are that alternative, but they're okay for now.

I've been looking at some French-style narrow cruiser bars that Velo-Orange sells, thinking to mount them upside-down. (I truly dislike an upright seating position; it's really uncomfortable for the distances and speeds I ride.) They call them the "Montmartre" bars, and since I lived in the Montmartre neighborhood of Paris for a few months they have sentimental associations as well as a promising shape. If they don't work out, it'll back to drops or bullhorns, either of which I can live with on all-day rides. We'll see how it all goes....

Looks like a winner, and it's made in the USA, which is in dire need of some industrial activity that is healthy for both the environment and for our beleaguered local economies.

The bike is said to be modular and demountable, and to weigh around 50 pounds. No word yet on when it will be available for sale, but we hope it's soon!

Go to the CETMA site and click on "Cargo." There's also a video on the page. 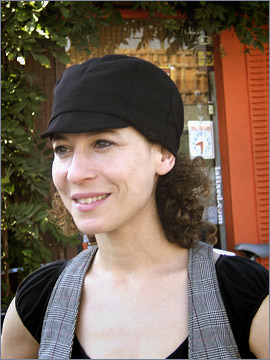 The James Black 3-Way Hat is now available in forest green wool gabardine, for those days when you feel the need to swerve away from hipster black a bit--or just to match your forest green Wool City Knickers (which we'll be restocking soon!). This color replaces the olive hemp, and is a bit more elegant and quite a bit more durable.

We have only limited quantities available, and only sizes large and extra large--which seem to be what everybody wants. Please check the sizing chart at the bottom of the catalog page! We have provided complete instructions for determining your hat size, which is very easy to do.

Breathable, yet warm in cold weather and cool in warm, non-itchy and versatile, this is the hat to take with you if you can take only one! Pull it down over your ears in the cold; or flip up the back hem to convert it to a standard cycling cap; or just wear it puffy up top if you have big hair! Slips into pocket, purse, or messenger bag when you're off the bike, and, unlike most brimmed hats, it's hand-washable. Fits easily under a helmet or hoodie, too!

In stock now in Dark Charcoal or Forest Green.

The James Black 3-Way Hat. Isn't it your turn to get one?

Saturday, November 22nd
Give a Shout-Out For Bikes!
Change.gov, president-elect Barack Obama's transition team website, is asking us all what he should do about energy and the environment--and he's especially interested in transportation!

You know what that means: time for us to send the word in that nothing beats the bicycle in providing clean, efficient, community-friendly urban transport.

Go to the website now and let the next prez know what you already know so well: that bikes not only belong, they rule!

Sunday, November 16th
The Silk Purse Project
Or, The Birth of Trevor Wong, wherein we follow the journey into light of my "Motobecane" pseudo-path-racer from much-scorned discount frame to pretty damned nice real-world fixie...read all about it in The Silk Purse Project.

Thursday, November 13th
For the Love of Parking Meters....
Drivers may hate them, but cyclists love them: parking meters have long provided a nearly-universal supply of adequate, though not ideal, bike racks in cities all over the US, and probably elsewhere as well. And drivers' spite of them is misplaced: it costs around $2,000.00 just to build an on-street parking space, and then it must be cleaned and maintained, and of course it forces the street to be wider, which contributes to sprawl and takes yet more square footage off the property tax rolls, costing your city money. Yes, drivers should pay for street parking. And in most commercial districts, merchants ask for metered parking, to keep parking hogs from occupying a space all day, which prevents potential customers from parking.

But the highest, noblest use of a parking meter is the securing of a bicycle--that refined machine that brings grace to the streets, strength to hearts and legs, and clarity to our burdened atmosphere....

That's why I was concerned when I stopped on the Larchmont shopping street the other day and saw that DOT was putting up pay stations--those little boxes that accept payment for several spaces in one machine, the parking slots being identified by painted numbers.

I felt that the standard parking meters were inevitably destined to be removed, and so I directed an email query to my local councilmember (himself a regular cyclist).

Well, I heard from his deputy, but at least I heard. She confirmed that the meters were to go. I had asked that in that case they insure that DOT installed many more bike racks than are presently there, and the reply she got from DOT stated that, "Yes, we are adding the pay stations and the meter posts will be removed. I have copied the Bikeways Section to investigate for additional bike racks along Larchmont Bl."

This promises nothing but is a start. I'll keep on them, since, as I wrote them, "This is hardly the time in our history when we should be making practical cycling inconvenient."

Let's hope that DOT decides to make sense here. The bicycle is the future of personal transit. Take away our parking meters, if you must, but then replace them with real bike racks.

Which cost far less than on-street parking does for cars, and take so little space.

Update: One of our readers who responded to this post (unfortunately he didn't sign his name) came up with this brilliant suggestion:

"If the city added a well thought security enhancement to the existing pipe stanchion, when the meter head was removed, the bike parking issue could be resolved immediately and with cost effectiveness."

I have forwarded it to both my councilmember's office and the contacts listed in the deputy's response.

Update 2: Sometimes things work out. I just received this from the councilmember's deputy:

'Michelle Mowery's group is in the process of getting a contractor to install bicycle racks that fits over the parking meter posts once the parking meters are removed. The Meter Planning Section has been working with Michelle's group to identify which meter posts to keep in each Pay Station areas.'"

I will see if I can keep track of progress on this small but significant effort.

Update 3: See what Seattle's done in the same situation at Seattle.gov

Thursday, November 6th
James Black Hats Back in Stock!
And you thought the election was big news!

I just pedaled downtown and picked up a fresh batch of James Black hats in dark charcoal wool gabardine, sizes Large and Extra large. So if you've got a pressing need to warm your noggin and still look great whilst doing so, click on over to Bicycle Fixation and see what we can do for you:

We will also be releasing in a very short time a small run of the hats in forest green wool gab--same material as the forest green City Knickers we had a while ago. But not quite yet, okay?

Hemp hats are permanently out of production; they are just too hard to sew straight. We have a number of mediums left, but they arre irregulars (mostly a slightly crooked seam in front):

Works with or without a helmet, in warm weather or cool. And always looks great!

Click on the image for a bigger version
Received the much-nicer threadless stem from Carla a couple of days ago and immediately swapped it in, then taped up the bars. Still have to work on the fenders and rack, but that won't take long. I hope to be done by the weekend.

Took the much-maligned but really rather handsome bike out for a spin yesterday, a little post-voting ride to South Pasadena to visit with Velo-Retro's Chuck Schmidt to show off this entirely non-retro bike, and to distract myself from fears (fortunately groundless!) of yet another stolen election.

Trevor (the orange one's name; see my earlier entries Part I and Part II below) behaved impeccably. He's not a slingshot, the way my dear Bottecchia is, but more of a solid-citizen type--but we still made good time on the 38-mile round trip.

Can't complain. The Cheap Frame Project is a success. Expect a complete article, with lots of pictures, in a week or two!

Monday, November 3rd
Bicycle Fixation in USA Today
...Albeit in a very small way. The almost-a-newspaper ran a really rather nice article on arty bike racks, and quoted us at the end. There are some good pictures of inventive bicycle parking, and the overall tone of the article was not condescending (thanks to writer Jeff Martin), the USA Today did see fit to file it under "News: Offbeat."

Still, good publicity for the cause, and my quote did emphasize the public benefits of more bike parking, and of making downtowns prettier in general.