The real day, of course, is the Winter Solstice...at least in the Northern Hemisphere. I guess today is the Business & Politics New Year's eve, but it'll do. It was a beautiful calm clear day in Southern California, though Gina and I are both still nursing colds or flus or whatever it is that we've got, and my only bicycle ride was to the farmers market in search of greens and roots. After dark, though, we strolled to the museum and had drinks and designer pizza in the courtyard, very nice.

And tomorrow I'll probably ride around a mostly deserted Downtown and see the first of January in among the skyscrapers.

I wish us all worthwhile labor, attentive love, openhearted friendship, and honest colleagues in whatever we face for 2013 and beyond.

And plenty of good bike rides to keep us dancing with gravity.


Friday, December 28th
Depends What You're Trying to Cure
Finally caught the season's cold, or flu, or whatever it is. Whatever it is is most unpleasant, stuffing the nose, tickling the throat into useless coughs, surrounding weary bones with lingering aches.

But, it never gets quite bad enough to preclude a short bike ride...which has a pleasantly revivifying effect. My wife and I—both of us have the affliction now— have indulged a few times.

We rode the couple of miles to Paper or Plastik, our favorite coffeehouse, albeit one sited on a stretch of Pico Boulevard afflicted by dreary cinderblock storefronts and worn-down car-repair shops. The coffeehouse itself is whimsical and full of light, serves wonderful coffee and inventive food, and is graced by friendly owners and staff.

On the way back we stopped to admire cherry trees blooming white and liquidambars drying to sunset red on a side street we favor.

Then today we pedaled over to Larchmont for lunch with my ex, meandering along LA's eventually-to-be Fourth Street Neighborhood Greenway, which however is at present still as buckled, cracked, and potholed as some back alley in a war zone. Nevertheless, the grand houses, grander trees, and rolling lawns make it a respite from the shrieking traffic chaos that turn the bordering arterials into exercises in tedium for cyclists and motorists both.

And a couple of days ago I got on the bike in the early morning and rode nowhere at all...just wandered north along random side streets, turned west for a while, and then completed the square with pretty much no plan at all, and at a conscientiously lazy pace.

Each ride left me feeling a little better than I had before I started.

If I'm going to have a virus, I may as well serve myself a bit of pleasure to offset the misery if I can. We've been strong enough to ride a little, so we bundle up and ride. It won't cure a thing but the blues, and that's good enough for us.


Wednesday, December 26th
Offsite Blogging XCVI
Both posts this week are on the bikeshare system coming to LA soon, with a couple of different takes....

On Orange 20's blog, I complain a bit about some cluelessness in the presentation and the venue, in It's Official: Bikeshare Is Coming to LA.

The announcement was made in conjunction with a bike and helmet give-away at the Eastside Boys and Girls Club, which both the Mayor and the Councilman attended as youngsters.

Here's the press release from BikeNation describing the evening:

December 20, 2012 (Los Angeles, CA) Bike Nation announced today its plans for its 2013 rollout of Los Angeles' first major bike share program. The system will officially launch in Downtown in April 2013. Last week, the LA City Council unanimously passed a motion that directs staff to create a permit process for Bike Nation's bike sharing stations to be placed in the public right of way. Bike Nation is currently working with the City for all necessary approval processes and permitting that will pave the way for the company to implement its privatized bike share business model. Unlike other North American bike share programs, Bike Nation is able to privately fund the bike sharing program without the requirement of any government funding or subsidies and will monetize the program through membership and usage, sponsorship and advertising.

Earlier this year, Bike Nation created a website where the general public can have input on the station locations in Downtown through its Suggest a Station website. The Southern California-based privately-funded bike share company has previously announced plans to install up to 4,000 bikes and 400 stations throughout Los Angeles.

The announcement was made during a bike giveaway to the 8 to 12 year old participants of the Los Angeles Boys & Girls Club bike program by Bike Nation executives, with L.A. Mayor Antonio Villaraigosa and Bike Nation's Community Ambassador and L.A. Clippers forward Caron Butler on-hand.

"We are excited to put stations on the ground in Downtown Los Angeles and begin the process of rolling out our bike share program and providing a safe, low-cost, healthy transportation alternative to Los Angeles residents," said Derek Fretheim, Bike Nation Chief Operating Officer. "The Company has already begun its site planning in anticipation of the City Council Motion and created a sample permit package consisting of initial station locations."

"I am happy to serve as Bike Nation Ambassador and today's event is just one example of things to come," said Butler. "Bicycling and youth fitness has been a passion of mine for many years now. I am excited that through this bike-sharing program people will have the opportunity to consider biking as a viable transportation option while also becoming more fit."

The initial preliminary Downtown station locations will include:
Bike Nation recently has already installed multiple stations in Anaheim and is expect to open the system to the public in early January. The bike share company has also previously announced extensive bike share programs in Fullerton and Long Beach, which will be launching in 2013. Bike Nation user memberships are transferable to any city within its bike share systems.

Bike Nation manufacturers its own bikes, which are chainless and feature active GPS technology and airless tires, reducing the need for on-road service. The kiosks are modular, portable, wirelessly connected and solar powered so that monitoring and load balancing is easily managed. Bike Nation's kiosks, docks, station platforms are made in Orange County and its bikes are manufactured in the United States. The company is supporting and sustaining local manufacturing jobs and projects to create over 150 service jobs through 2013.

The bike share system is made up of self-service kiosks where individuals can rent and return a bicycle anywhere within a network of stations. Stations are located in close proximity for quick trips where users live, work and visit. The usage fees for the bike share system are incentivized for turnover and trips of less than 30 minutes in duration with an average single 24-hour membership priced at $6, with discounts for three-day ($12), weekly ($25), monthly ($35), yearly ($75) and yearly student/senior rentals ($50).

ABOUT BIKE NATION
Incorporated in 2009, Bike Nation provides privately funded public bike sharing systems to cities, agencies and other entities. The company is considered a leader in the bike share industry by providing fourth generation technology and bikes. Bike Nation strives to offer a convenient, affordable, user-friendly and healthy alternative to polluting forms of transportation that become part of the overall transportation fabric within the community it services. The company is headquartered in Tustin, California. Bike Nation has created a unique model in which it can provide municipalities a fully-operational bike sharing program without the use of government funding or subsidies.

I can't say I'm enthusiastic about their first set of kiosk sites (except for Union Station, which is across the street from La Plaza), but the word is that they'll expand rapidly. Really, though&mdash: police headquarters? CalTrans?

At Orange 20, I turn my attention back to Beverly Hills, aka The Little City That Couldn't.

And at Flying Pigeon LA, I talk about rain, bikes, and fenders, and how to keep riding through winter without getting All Wet.

Thursday, December 13th
Urban Cycling in the Snow in Leiden
A Flickr user named Alicia recorded this delightful snippet of everyday folks cycling through a snowstorm in Leiden in the Netherlands:


Nothing "epic" about it, just folks going about their daily business on their bikes!

Wednesday, December 12th
Offsite Blogging XCIV
It's Wednesday, and so time to direct your attention to the other people's blogs I infest, starting with Orange 20, where I ask What's Wrong with This Picture?, and does it really belong in a world-class museum?

Then it's on to Flying Pigeon LA, where I get on the Gold Line train with my bike and muse on Negotiated Space.

Saturday, December 8th
"Sierra Club Edition" Bike from Public
The Sierra Club has collaborated with Public Bikes in San Francisco on a special-edition bicycle available from now till December 25th only. Sierra Club members receive a discount on purchase, and a portion of the proceeds go back to the Club. To quote the Cub's Kelly Kirchner:

I am so proud to introduce the first-ever, limited time only, custom Sierra Club bike by PUBLIC. With custom green color and accents, the Sierra Club logo and tagline, it's like wearing your eco-pride on your ride. Available in two different frame styles (diamond or step-through) and designed with both form and function in mind, these European-inspired road bikes are not only chic but they're also sturdy and ride like butter.

The good news? Sierra Club members receive a 10% discount off the $595 sticker price (psst, that's more than the cost of a Sierra Club membership!) and a portion of the proceeds comes back to support the Sierra Club mission to "explore, enjoy and protect the planet." So, if you or your readers are looking for a gift that gives back, look no further.

The bad news? There's a limited time left to order. The Sierra Club bike is available to order on the PUBLIC website through December 25, 2012 for delivery in June 2013.

We hope you"re inspired by our project and can help us spread the word in the last few weeks before the offer is gone forever—because the less cars and more bikes on the road, the better.

Wednesday, December 5th
Offsite Blogging XCIII
We've had a long, hot dry spell this year in LA, and Then the Rains Came, so I wrote up a blurb on the value of fenders for Orange 20.

And, whilst riding around the Marina on one of those damp days, I was shocked to find that we could Count on the County, which has installed a buffered bike lane on Fiji Way! So I wrote it up for Flying Pigeon....

Sunday, December 2nd
Most Novel Method of Blocking a Bike Lane?
Rode out to Santa Monica and Playa del Rey this cool grey December morning, and on my way through the Boho Zone of Venice Beach, I saw one of the most thoughtless blockages of a bike lane that I've ever encountered: 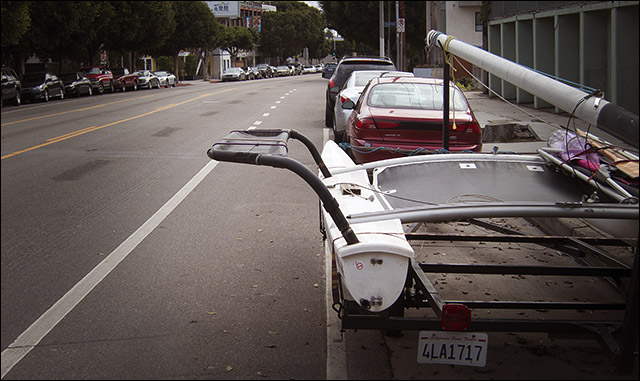 I was just stunned. The catamaran's matte-black bench seat—also covered with black canvas—takes up over half the bike lane and is hard to see even in daylight; it could be truly dangerous at night. What kind of mind does it take to park something like this blocking an extremely popular bike route? An idiot's, or a murderer's?

To add insult to possible injury, the bench on the sidewalk side of the boat had been removed and tucked away next to the starboard hull. It wasn't sticking out at all.

I tried calling Parking Enforcement, but they never answered...however, while the phone rang and rang I spotted a couple of cops driving towards me on Main, flagged them down, and showed them the problem. They promised to call it in to Parking Enforcement for me, and as I left I saw them making a U-turn to get next to the boat.

Hope it was gone by nightfall.