Bicycle Fixation Weblog
Home » Archives » December 2011 » New for the New Year
Saturday, December 31st
New for the New Year
Not so much a resolution as a prediction: I predict that we will have a new run of Classic Wool Knickers by the end of January. I've bought two rolls of sweet, slightly-lighter wool gabardine in a sort of soft black--it's hard to describe otherwise, as it's truly black, not gray, but has none of that dogmatic harshness of most black fabrics--and a rich olive brown. The downtown LA factory promised they will cut on Tuesday, and then, if all goes well, three weeks of sewing will see them done!

Less certain is the advent of our mandarin-collar merino jersey, which we were preparing to make just as the Great Recession fell upon us. I've been wearing the poor sample for three years. almost every day for half the year, and everyone loves it--though not as much as I do, for I get to wear it, and it is sweet!

So keep your eye on this blog for the announcements--or click on the link to the "Comments" page on the left and send me a note asking me to let you know by email when they're ready.


Thursday, December 29th
Offsite Blogging XLIV
This week's outside blogging sees a post on the shabby condition of the westbound bike lane on Imperial Highway, south of LAX; read More Than Symbolic Bike Lanes for details.

And at Flying Pigeon, I think about traffic, cycling, and business on the back side of LA's Silerlake neighborhood, in Road Diet à Deux.


Friday, December 23rd
Peculiarity
Okay, there's an odd peculiarity that afflicts a great many Los Angeles cyclists, and which I see exhibited all over town. Take a look at the picture below. What do you see? 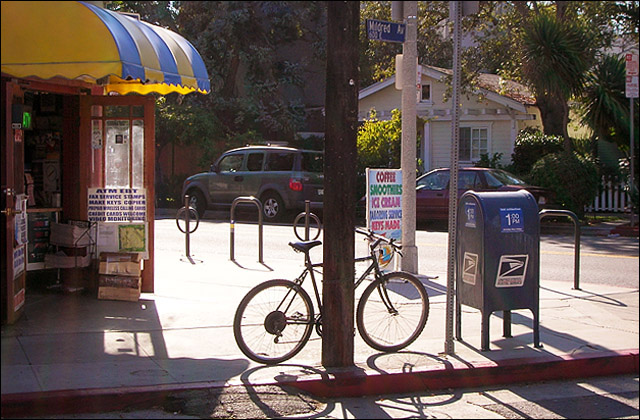 That's right--there are four fine, functional, and wide-open bike parking racks on this Venice corner in front of a popular neighborhood store.

And there is one bike there--chained to a telephone pole!

Those four racks can hold a total of eight bicycles quite easily. The store they serve is very small. The chances that eight bikes were locked up here when the one in the photo arrived, and that all but this one left subsequently, is rather low.

I've seen roadies ignore racks and maneuver their bikes behind sidewalk tables now and then, but that's because the roadie religion doesn't allow them to carry locks. But this bike is locked! (The chain is easy to see in the original image.)

I see the same phenomenon on Wilshire Boulevard near my apartment as well, fairly often: a perfectly good, quite empty rack, or two--and a bike locked to a meter, or a signpost, or a tree, not ten feet away.

I take it personally, as I've gotten dozens and dozens of bike racks installed in LA by using the city's bike rack request form. Though I am happy to admit that most of them end up with bicycles actually locked to them.

But this widespread spurning of convenient bike racks just puzzles me to no end.

Well...I suppose it's of a piece with those moronic drivers who zoom past you repeatedly on residential roads, only to be caught at lights long enough for you to catch up to them on your bike, over and over again. But at least all that sound and fury gives the driver the illusion of gain. I really can't imagine what sort of misguided thrill rack-spurning engenders in its practitioners.


Wednesday, December 21st
Offsite Blogging XLIII
Well, if you want to see the Mother of All Potholes (and ponder a bit on what it says about LA's attitude towards cyclists), read 99¢ Only on Orange 20's blog.

Then wash it down with a bit of good news (flavored with only a dash of worry) about the Silverlake-Atwater Express at Flying Pigeon LA.

Tuesday, December 20th
Out of Whole Cloth
A few weeks ago, I helped my neighbor fix u his old mountain bike so he could ride to his favorite restaurant without having to join in the Great Los Angeles Parking Frenzy when he arrived. This was Pete, who'd helped me get started in the rag trade six years ago. In exchange for some modest wrenching and a bit of teach-a-man-to-fish advice, he gave me three rolls of Japanese "broken denim" he'd had cluttering up his apartment.

It comes in half-width rolls, which left me wondering what to do with it--all our patterns are for 44 or 58 inch rolls--when I realized I have two projects for which this would be perfect:So it'll be one of the two. If you, Reader, have any preference, send me a message through our Comments form. And keep an eye on this blog; something should happen in the first quarter of 2012!

Wednesday, December 14th
Offsite Blogging XLII
Another week of blogging on other people's websites, bringing you a mixed bag here, as, on Orange 20, I save the City of Beverly Hills hundreds of thousands in consulting fees with a simple suggestion for how to facilitate bike lanes on Santa Monica Boulevard in Next Excuse, Please.....

And at Flying Pigeon LA I talk about coexisting with urban rail lines in Real Track Riding (reprising my comments in the previous entry on this blog with some new details).

The truth is, I love trains almost as much as I love bikes--and they're good for cities, and cycling!

Tuesday, December 13th
Track Riding
Every Tuesday, and some Sundays, I pedal to or through South Pasadena, usually to visit or ride with my friend Chuck Schmidt of Vélo Rétro. This generally involves crossing the Gold Line light rail tracks twice or thrice, sometimes in the rain. Right at Mission Street, where Buster's Coffee is and where I snapped this photo this morning, the tracks cross at a 45° angle. 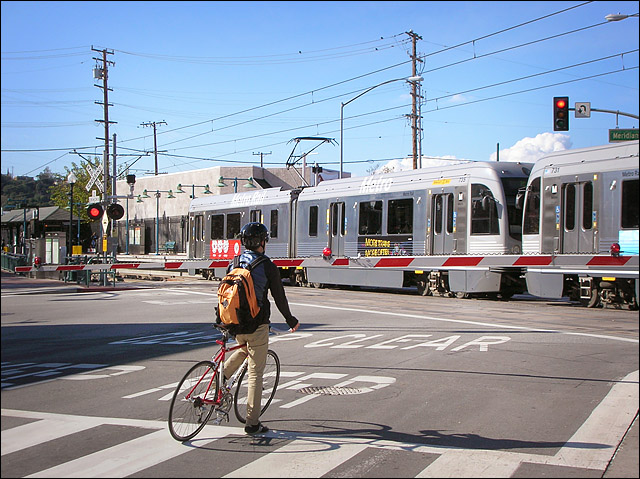 And every time I cross them, I think about all those complaints US cyclists have been posting to their various online venues about how awful and dangerous tram tracks are to cyclists.

Yet trams were already a feature of cities when bicycles became popular, and cyclists have been co-existing peacefully with them for well over a century (as in this film montage from Barcelona, photographed in 1908). And of course almost all European cities, as well as many Japanese ones, have trams, and also have much higher percentages of cyclists on the roads than even Portland.

I never have any trouble from tram tracks, and, as I sit at Buster's with Chuck, I see rider after rider go by and cross the tracks--roadies, fixie punks, shoppers on hybrids, old folks on cruisers, fat tires and skinny, lots...there are many, many cyclists in that area. I've never seen anyone so much as wobble. I even rode across once with a flat tire before I noticed and pulled over to patch the tube.

America nearly obliterated urban rail service in the car-mad '50s and '60s, so maybe we're just not used to it any more.

Maybe all we need is a little bit of practice and attentiveness.

Metro has come a long, long way in making their trains (and buses) more bike-friendly, finally lifting all restrictions on brining your bike aboard earlier this year. Urban rail is a superb way to move people around, with or without their bikes. Let's do our part and learn how to ride over tram tracks.

The rest of the world's been doing it for a hundred and twenty five years so far. I'll be we can get the hang of it ourselves in pretty short order.

Wednesday, December 7th
Box of Sox Means Back in Stock! 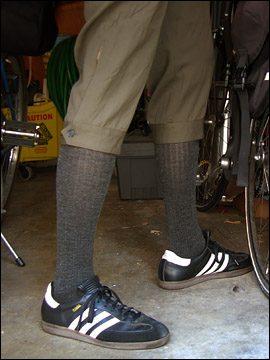 The doorbell rang late at night, and there on the porch was a box of sox to fill our stock. A bit late, as usual, but they've arrived: we now have a full stock of Bicycle Fixation Knicker Socks!

The perfect companion to any knickers (but especially our own, of course), they also work well with long pants or even winter bike tights.

Like all our products, our socks help you look good, feel good, and ride happy. And they're versatile: riders from the Arizona deserts to the Canadian tundra love 'em and use 'em, whether for weekend jaunts or to ride to work.

Orange 20 got a post on the aftermath of LA's recent crazy windstorm...and how easily our bikes were able to negotiate the Tour de Mess.

And Flying Pigeon LA hosts my screed on LA's inveterate habit of unnecessarily Reinventing the Wheel.

Tuesday, December 6th
Brush Up, or Brush Off?
Last week Los Angeles received its second buffered bike lane (aka "cycle track")--the first one being on 7th by MacArthur and only about a hundred yards long. The new lane is on Spring Street, in the heart of downtown, and is also LA's first attempt at a painted bike lane. Unfortunately, it looks as though the city needs a bit more practice with the paint brush--or at the very least needs to improve its timing.

The lane was first painted last week, possibly (as rumors have it) to be ready for a grand opening ceremony. Unfortunately, this was just before a massive rainstorm that had been looming for over a week. This, as you can imagine, played hell with the paint.

So, a few days later it was painted again--though according to my friends at the Los Angeles County Bicycle Coalition (responding to a whiny email of mine), only the segment from 4th to 9th was redone.

As it happened, I rode the entire length of the new lane today on my way to the garment factory, and I happened to get a photo of the 9th Street end of it, which I present as Exhibit A below: 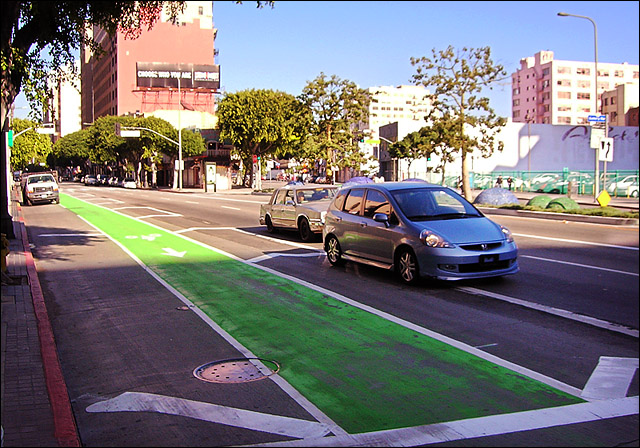 Not looking too good, is it?

It's a pity, as the lane itself is pretty well-designed, seems to keep drivers in their place, and doesn't throw any funny jogs at you as so many half-baked lanes do. It's really quite nice, and takes you through a corridor of wonderful Art Deco skyscrapers housing restaurants, offices, stores, and other useful destinations, as well as most of the buildings in the Civic Center, including City Hall itself. But people are already making fun of it because the paint is flaking off after only a week.

Still, if you're in LA, give it a try. It's a comfortable ride to places you will want or need to go to, and will soon connect with the extended 7th Street lanes and possibly some others. (It runs westbound; there's an eastbound companion lane a block over on Main Street, but I don't believe that one's green.)

Friday, December 2nd
Occupy ALL Streets!
J. H. Crawford of carfree.com has just released a concise little video exploring the relationship between cars, public health, livable cities, and the 1%'s economic manipulations. It makes a compelling case for the wholesale removal of cars from central cities, to make room for street life, transit, bicycling, and a truly sustainable economy. Here it is, from Vimeo:

Occupy All Streets: The Role of Carfree Cities in a More Sustainable World from J.H. Crawford on Vimeo.

Crawford and I have worked together on urban and carfree issues for many years--my son and I contributed photos to his books, Carfree Cities and Carfree Design Manual, and I helped a bit with the Los Angeles map in the video.

We can't really build a pleasurable, healthy, sustainable life in our cities if we continue to jam them full of cars to the exclusion of everything else--and their effect on the economy, thanks to the massive hidden subsidies driving requires, is even worse.

Crawford's work is some of the most highly developed in this line. You could do worse than to browse his website after seeing the video.