Bicycle Fixation Weblog
Home » Archives » August 2012 » Offsite Blogging LXXIX
Wednesday, August 29th
Offsite Blogging LXXIX
Talking about the development of bike networks and bike cultures this week. First by looking at infrastructure in Santa Monica, in How to Build a Bike Network on Orange 20's blog, and then pondering how to build the political will that must come before the paint and paving in Questioning Prospective Authority at Flying Pigeon LA.

Two sides of the same coin....


Monday, August 27th
Lazy Days, Dammit!
The recovery from my small stroke on the first of this month (see "A Stroke of Bad Luck" on this blog if this is a surprise to you) involves a lot of rest—something oddly difficult for me as a rather driven soul to accommodate myself to! Especially as my bicycling right now is rationed to a paltry twelve miles a week (soon to double, woo-hoo!) It might be somewhat restricted even farther down the recovery timeline but I really haven't gotten a clear opinion from the docs on that.

Indeed, the plurality of physicians has, at least for the moment, increased rather than eased confusion. I am reminded of Mark Twain's dictum that "A man with one watch always knows what time it is; a man with two watches is never sure."

Still writing for my colleagues' blogs, as regular readers here know, ands till working on the most most comfortable and fine-looking bicycle clothing around, with in fact a new batch of knickers scheduled to be done this week.

And still involved in advocacy. Tomorrow night there's a meeting of the Los Angeles County Bicycle Coalition's Civic Engagement Committee just a few blocks from my house, and I plan to be there. (If you're in Los Angeles and you want to join us, Email Ted Rogers of Biking in LA; all are welcome!)

So I'm getting through the days, seem to be getting better, and still getting a little bit of work done. And even riding a bit!


Wednesday, August 22nd
Offsite blogging LXXVIII
A weel both busy and slow as I pace my work for recovery's sake, but I've put a coupleof posts up on our colleagues' blogs, starting with A Good Kind of Growth, contrasting car-driven sprawl with what building for bicyclists can do to improve civic life and commerce, and winding up with Pump It Up, a paean to self-reliance and the minor maintenance chores that help get you there.

More next week as usual, if all goes well!


Wednesday, August 15th
Offsite Blogging LXXVII
On Orange 20's blog this week, I look at What We've Got and What We Need, using Santa Monica (again!) as an example of a city that builds bikeways that everyday people can use every day.

And at Flying Pigeon LA's fine little blog, I ask why Metro seems to be dissing cyclists, who can be a transit agency's best customers, in The Way West, which focusses on the Expo Line's western extension, a-building right now.

Tuesday, August 14th
Wool and Warm Weather
One of the misconceptions that most bedevils as a business owner as well as a bicycle advocate is the widespread feeling that wool is for cool or cold weather only. Yet nothing could be farther from the truth! For insulation works both ways—the traditional Bedouin robes are made of wool— and wool breathes better than almost any other fabric. I myself haven't found another, natural or synthetic, more comfortable in the often-blazing temperatures of Los Angeles, where I developed the Bicycle Fixation clothing line. 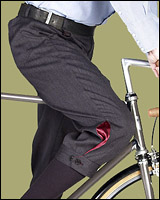 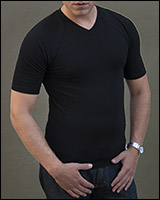 You stay drier in the heat in wool—and you stay drier in the wet as well, should you get caught in a rain in any season; a few blocks of pedaling is usually enough to dry out your knickers or v-neck t-shirt. You stay warmer in the cold, of course; but you also stay cooler in hot weather up to around 95°F, when it may finally be time for shorts and sunblock rather than much in the way of clothing at all. Though I personally have worn a merino t-shirt while riding through a summer day that topped out at 116°F!

The plain fact of the matter is, with the carefully-chosen weights, drapes, and cuts of our wool knickers, jerseys (out of stock at the moment), and t-shirts, you have a kit for all seasons, wich you can wear summer and winter and everything in between with a bit of judicious layering.

And be the most elegant cyclist for miles around...till your friends pick up some Bicycle Fixation gear themselves!

Read what prior purchasers have said about our Classic Wool Knickers on our Testimonials Page—our stock of them is low right now, but a fresh batch in two color variations is due from our downtown factory in a couple of weeks.

And check out one of the best looking t-shirts in any material, let alone fine merino wool personally imported from the mill in New Zealand, the merino v-neck t-shirt, which early adopters are already praising. (Including the younger model, who claimed one in lieu of pay.) Thanks to our carefully-designed cut, they fit almost any shape, no matter which way you taper!

Wednesday, August 8th
Offsite Blogging LXXVI
On Orange 20's blog this week I explore a little more of what Santa Monica's up to with it s ever-growing bike network in They're at It Again!

And at Flying Pigeon LA I celebrate the extension of the York Boulevard bike lanes but remind folks that that this Little Bit of Love for NELA shouldn't get us all moony; we still need commitment.

Sunday, August 5th
A Stroke of Bad Luck
As many of you know, I have had a very complicated and stressful life of late, with multiple projects and obligations and many, many deadlines. Many of these were self-assigned, an artifact of being a Type-A personality, to the point that I was worried about its effect on my own health. It's bad enough when the universe deals you a bad hand, but when you load the deck against yourself you feel very foolish. And so do I today.

Wednesday night I had what was, fortunately, a small stroke. Not the kind caused by a blockage, but the kind resulting from high blood pressure and stress, and possibly involving a genetic predisposition. I noticed that I could not hold on to the soap to wash my hands, nor could I type well-—all the right hand letters came out wrong as my fingers missed the keys. Went into Cedars-Sinai, spent one night in the critical care unit and one in a regular ward, and now I'm home. I'll have to take a modest pill for at least a year, spend a week or two staying home and doing not much of anything—though I can take walks around the neighborhood—and can begin resuming my normal physical activities—including bicycle riding—at ten percent of their intensity for the first week, increasing the "dosage" by ten percent each week. However, I have to stay away from activities that involve heavy strain, such as lifting etc., for longer, don't know how long yet. I also have to take my blood pressure daily with a little machine (fortunately quite inexpensive) probably pretty much from now on.

There were many years leading up to this—I've always been an anxious person, and even took treatment for anxiety back when I had insurance coverage. However, I got lazy and probably a little cocky too, and sloughed off doing my relaxation exercises for...well, several years, if I should be honest. Once I built my little clothing business up very nicely, I got away from a very bad job situation I was in during my last years in the photo biz. But that was just in time to watch the Great Recession gnaw at that business and chew it down by half.

During all this time, I was almost the only person taking care of my mother's affairs during her last years, which involved nearly daily obligations. After she died, leaving a trust and several conflicting wills, the family conflicts began. At the same time we had lost our medical coverage, so went to doctors much less often.

Combine that with my habit of taking all obligations to heart, and being even more pushy with myself than with others, and what happened is less surprising.

The bike riding, as if often does, gave me a reserve of physical strength that is helping to speed up the recovery, but I still have a healing wound, even though it can't be seen and its effects are by now, four days later, unnoticeable to any but doctors and myself.

If it weren't medically unwise, I'd slap myself upside the head, since much of what I have to do, to fulfill the neurologist's prediction that if I take care of myself he won't have to see me for another thirty or forty years, are things (especially attitudinal changes) I've already learned but did not put into practice, having become addicted to an exaggerated sense of responsibility.

But that's another, longer story, and not for this venue.

I won't be participating in as many meetings and events for a relatively short while, and will cut out peripheral projects for the foreseeable future.

Thank you all for reading this far (if you have), and with luck and diligence I'll continue annoying the blogosphere for a long time to come.

Wednesday, August 1st
Offsite Blogging LXXV
On Orange 20's blog, I report on the LACBC's new Civic Engagement Committee (of which I am a member), and what we've been up to in our new administrative existence. And how we'd like to see you Getting Involved.

And over at Flying Pigeon LA's fine little blog, I look wistfully westward again to Santa Monica, and how all it's been doing for local cycling has been rebounding to benefit the city's many small businesses. Aren't we getting tired of seeing LA Lapped Again in the race to the future...?