Bicycle Fixation Weblog
Home » Archives » June 2007 » Trains, Speed, & Energy
Thursday, June 28th
Trains, Speed, & Energy
Just received a link to an interesting brief at the French SNCF (national railway) website about the relative energy efficiency of bullt trains vs. cars and planes on the Paris-Marseille run. French trains (and all true bullet trains) are electric, of course, and the electricity comes from a variety of sources, so they've translated the energy use into a comparative figure in kilos-of-oil equivalency (koe):

Naturally, slower trains would use less energy, but, as the article points out, then they would not capture market share from the far-more-polluting aircraft.

The short article is availabe at On Track to Energy Efficiency, in English.

So do as we did on our trip to San Jose: load your bike on a train, kick back and enjoy the trip and the good company, and have your favorite ride with you when you get there!


Monday, June 25th
Fixie Zealot T-Shirts Now Available
Fixie phreaks, we've made a shirt for you! Check out our designs for cotton T-shirts bearing our fixie zealot slogan, "If it's fixed, don't brake it," on our new T-shirt page.

Thursday, June 21st
Kookaburra Powerwash Now Available
Recognizing that bicycle do use a modest amount of oil and grease, and that it can get on your clothes, or tracked inside on your shoes (or your bikes; some of ours sleep in the living room!), we've added Kookaburra's Powerwash to our product line. It's a variant of Woolwash, minus the lanolin, but with a powerful citrus cleaner added. Still earth-friendly!

Take a look at it on our Powerwash page.


Wednesday, June 20th
Hemp City Knickers Now Available!
Okay, folks, we've cut the cloth for the Hemp City Knickers, and the sewing has begun! We'll be able to deliver (if all goes as planned) starting around July 1st. So place your orders now--we'll ship first-come-first-served, as usual for us with a new product release.

Order your Hemp City Knickers now, and be the first on your block to ride in summer's slickest style!

A New Future for Farming?
The BBC reports on an interesting variant of urban farming--skyscraper-greenhouses, powered by solar energy and biomass combustion, in center cities. Read their report on Vertical Farming in the Big Apple.

But why limit yourself to such specialized applications? There are thousands of acres of unused (or rarely-used) rooftop in most cities, that could (if the live-load limits of the roof structure permits) be used for urban farming, with the side benefit of providing habitat for birds and for work-weary humans. And they provide insulation for the building, reducing its energy use for both heating and cooling.

Green roofs have been in use for millenia; why do we keep forgetting what works to devote ourselves to cheap futilities?


Saturday, June 16th
Bicycle in Amsterdam
We have a fine new photo essay on cycling in Amsterdam, by Henry Cutler, who runs WorksCycles in that town. Click on over to check it out: many great images of Dutch vruisers, longjohns, filibuses, and more. Go to The Bicycle in Amsterdam, and see what it could be like in your town, too, if life made sense.

Amsterdam is cold, wet, crowded, and wealthy--and lives by the bike!


Thursday, June 14th
Police State Focus on Cyclists....
As if the clearly illegal and authoritarian tactics employed by New York's police department lately [Examples: 1, 2, 3, 4, and many more....] against cyclists weren't enough, even the supposedly mellow realms of Minnesota aren't safe from petro-fascism. I just read about the case of Stephan Orsak (a classical violinist; we all know how violent they are), who was verbally harassed, manhandled, Taser'd, and finally arrested for simply riding a bicycle out of the Minneapolis airport in full accordance with the state's vehicle code provisions.

His case goes to court on July 16th; you can read about it on the Greencycles blog--which includes links to the police "evidence" against Mr. Orsak.

Interestingly, video surveillance tapes of the interaction appear to have been erased....

Mr. Orsak needs all our support, moral or tangible. This is one more incident in a pattern of police harassment of cyclists exercising their legal rights on the roads of the American states.


Tuesday, June 12th
Wider Sidewalks, Better Life....
Looks like Los Angeles, of all places, is taking its first concrete steps (yes, pun intended) towards making a city that has room for human beings who are not inside a car. The Los Angeles Downtown News reports:

When the city's Planning Commission released a fiery memorandum in April, under the banner "Do Real Planning," one concern rose to the top. "Demand a walkable city," read its first sentence.

But on Thursday, June 14, in a presentation before the Planning Commission, city planners will unveil how they intend to actualize that demand, starting with Downtown. It marks the first official report for a project charged with implementing widespread design changes to Downtown streets.

To read the entire article, go to: Paving the Way

Knickers, Hats, Whatever....
Naturally, there has been the standard delay at the sewing factory, so we probably won't start shipping backorders of our Classic Wool Knickers till Monday, for which I apologize. This also means that the release of the Hemp City Knickers may be knocked back a week or so...we'll see, and I'll keep you updated.

Better news is that we may finally have found a factory (albeit a tiny one) to produce the upcoming James Black Hat! The sample should be done this weekend, and if all goes well we'll start production a week or two after.

Meanwhile, I'm waiting to hear from what may be a viable supplier of merino for the jersey project--the last one I found was priced so high I wouldn't have been able to sell the product, at least not to anyone of sound mind.

And we're conceptualizing the hemp touring shorts and a possible rough-stuff knicker too, so this may be a busy year here at Bicycle Fixation!

Oh, yeah, and still ranting and raving about bikes, cars, sprawl, the environment, truth; justice, and the American Way; and all that. So stay tuned! 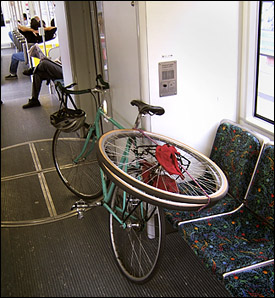 So I had to figure out how to transport two built-up 27" bicycle wheels to Harv's house, way up on top of a hill in Montecito heights, and bring back the two built-up 650B wheels I was trading them for.

A bicycle wheel without the bicycle attached is a cumbersome object to carry on a bicycle.

Harv said he'd strapped one to each side of a rack before, but I have big feet and was worried my heels would bump them. So I just tried stacking them like pancakes on top of the rack, and using a bungee cord, and small cargo net, and a couple of rags.

Oddly enough, it worked, and rode well over the fairly bumpy LA streets.

I didn't really have a lot of faith in the bungee cords, so I took the rig on the Red and Gold line trains till I was fairly near Harv's house. But everything stayed put, even when I forgot myself and got going a little faster, in spite of the bumpy streets. The two-mile climb to Harv's house was uneventful.

Afterwards, with the 650B wheels strapped on the same way, I rode to South Pasadena to have lunch with Chuck Schmidt, bicycle lover extraordinaire and keeper of the Velo Retro website, then hopped the Gold Line back to Downtown LA to meet another friend of mine in the Garment District (with whom I had some business), which entailed a several mile ride from Union Station. Then back to 7th and Fig to the Red Line, which dropped me off two or three miles from home.

Satchmo, my old Fuji, handled it all with aplomb, even though he was born a road bike. Looked silly--but it worked!

Saturday, June 2nd
Carfree Suburb in Germany
Yes, in a heavily industrialized nation even wealthier than the US, people, politicians, and planners are actually making sense! Vauban, a suburb (yes) of Freiburg, was designed as a car-free development with the space typically dedicated to cars given to community and greenery. The upscale residents love it:

"Schools, kindergartens, a farmer's market, a shopping center, a good store which sells organic products only, and a recreation area -- you name it, it's all in walking or cycling distance," resident Sabine Burgermeister said. "And it's a much better quality of life here than it is in downtown Freiburg. And if we need to go there, there's always the option to take the tramway."

The free tramway passes generously provided by the city of Freiburg are helping residents of Vauban to become less car-dependent....

Read the rest of the story at, of all places, ABC News.

Friday, June 1st
The Price of Gasoline Is Not the Problem With Driving
And a superb overview of the situation comes to us from Jan Lundberg, formerly publisher of the Lundberg Letter, which purveys analytical news to the oil industry. A quote:

Record gasoline usage, which as we may discover is occurring (when the figures are in), means more deaths on the road and in the cancer wards. This is a holocaust surpassing 100,000 U.S. residents each year. It could be drastically reduced if our society really valued life over greed. Looking at the actual number of deaths of U.S. troops in Iraq (aside from the far greater Iraqi civilian casualties), the 3,440-plus figure is but a fraction of ongoing car slaughter and lethal exhaust-caused diseases in this country. Hundreds of thousands of U.S. drivers also die from unhealthy hearts caused by the sedentary lifestyle.

Lunberg now publishes Culture Change, where you can find the rest of the article, entitled Record Gasoline Prices amidst Hyperconsumption and Slaughter.