Thursday, August 21st
Offsite Blogging CLXXXII
Seems that, in the midst of a busy day, I forgot to post last week's "offsite blogging," so today you'll just get a laundry list, without the usual failed attempt at cleverness. Here's this week's and last week's posts on Flying Pigeon LA and Orange 20 Bikes;


Wednesday, August 13th
"Our Own Day Here": Observations on Community

Bicycle Fixation editor Richard Risemberg has just released an e-book of selected essays on community and place. Through the medium of Los Angeles, he explores how the way we travel, live, and shop shape our lives and our souls, and reveals the richness of experience he finds in city living.

Among the subjects covered in these sometimes poetic, sometime humorous essays are cars, transit and bicycling, economics and politics, development, as well as the sense of place and the places that make it happen.

Many of these were published over the last fourteen years in Sustainable City News, Bicycle Fixation, the Los Angeles Business Journal, Asia Times, Eclectica, and Out Your Backdoor, but others have never before been seen in the wild.

Our Own Day Here is available for Kindle at Amazon.

And in Apple's iTunes store.

And in nearly all known e-reader formats at Smashwords.

It will cost you $4.99, just a little over the price of a fancy latte at your corner coffeehouse. And if you buy it at Smashwords, you may enjoy a 10% discount using the following coupon code: BU84L (This code expires at the end of August.)

World-famous Amoeba Records is hosting a bike-culture party in Hollywood on Sunday, August 17th, from noon to 5pm, featuring food & drinks, music, raffles, and more to help celebrate bike culture in Los Angeles. There will also be workshops and bike valet parking, the latter by the Los Angeles County Bicycle Coalition. One of the party's goals is "raising awareness about the Ride Hollywood campaign, which supports proposed bike lanes on Hollywood Blvd"; bike lanes are always a difficult process in politically-turgid Los Angeles, so this is a big deal.

Just so you won't get lost on the way, here's a link to a map.

Wednesday, August 6th
Offsite Blogging CLXXXI
This week on Orange 20 Bikes, I reveal how my preliminary analysis of bike lane opponent Gil Cedillo's campaign contributions leads me to think it's a case of "Outside Interests, Inside Job" holding back progress along LA's North Figueroa Street.

So, at Flying Pigeon LA, I compare how my own city is doing against a few other towns across the continent, and hope that though The Dogs Bark, the caravan will move on.… 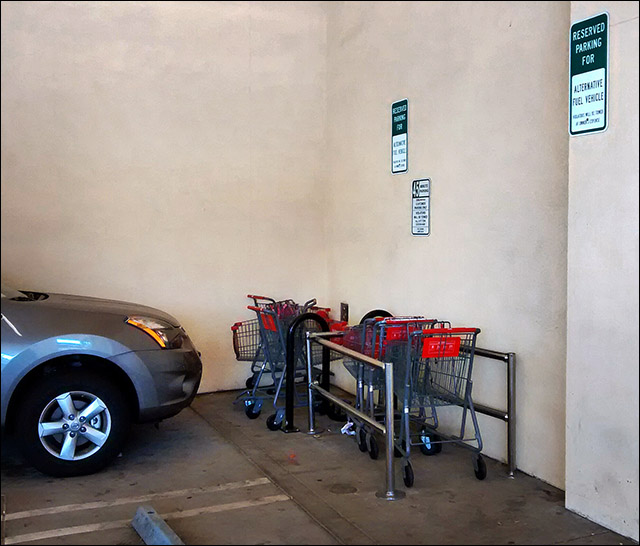 I suppose it was inevitable that the "bike parking" included in this Los Angeles outpost of the CVS drugstore chain should be so entirely inadequate. Apparently the thought was simply to put a bike rack in, any bike rack, with as little forethought as possible. Tucked away in a corner where it ends up blocked by pallets, stacks of flattened cardboard boxes, or, as in this snapshot, a huddle of shopping carts and a cart carrel. And of course it's pretty much out of sight in a shadowy corner of a parking area. Note also that it's placed so close to one wall that only part of would be usable if it were accessible.

The only thing that's been done right is that it is near one of the store entrances, right by the handicapped parking stalls. However, since it is never actually available, that doesn't help much. I walk by here several times a week, and always check on it, hoping against hope that one day it will be clear and that someone will actually have locked a bike to it.

It's been about a year, and no luck so far.

When will Americans begin to realize that symbolic actions such as this have little if any effect on real life? This is a talisman of accommodation, so that someone can flatter themselves that they "did the right thing," while doing it in as perfunctory a way as is possible.

I have called into the city to have a public bike rack installed on the sidewalk outside the store; that one will certainly see use, once it's in place.