Bicycle Fixation Weblog
Home » Archives » January 2012 » A Mystery Bridge
Monday, January 30th
A Mystery Bridge
The bridge in the image below is not a railroad bridge, though it used to be one. At first glance I thought it still was, but then I noticed little figures walking and cycling across it, and wind sculptures along the right-of-way--not an enhancement typical of freight railways by any means!

But, though it was obviously part of a bikeway, and one that seemed to be going in my direction (I was pedaling to Fullerton for a meeting), there was nary a sign to indicate what it was, where it went, or how to get onto it. 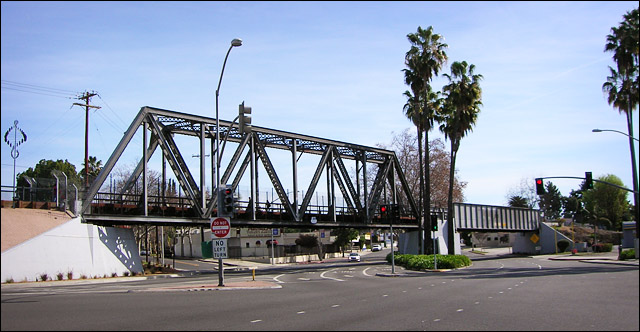 This is all too typical of Los Angeles and its environs. In the same city--Whittier--I passed several signs pointing right or left from Whittier Bouelvard itself, where I was riding, and indicating "Bike Route." But no indication of where said bike route might lead--just the sign and a lonely arrow.

Well, I keep grousing about wayfinding both publicly and behind the scenes at various government agencies concerned with such things; maybe they'll figure it out one of these days. (There's supposedly a wayfinding project underway in LA County, but no one I've asked yet seems to have details.)

Meanwhile, if you're in or near Whittier, you might check out the Whittier Greenway--I had to go online to discover its name. Looks like a pretty useful local route, and that bridge does get you over a complex and poorly-signed intersection with grace and ease. Here's the trail's webpage.

At Orange 20, I hammer once more on my favorite theme of wayfinding, in Lost in LA, while on Flying Pigeon LA's blog I eke out a bit of enthusiasm for El Monte: Crossroads of Progress?--which really ain't so bad!


Monday, January 23rd
Handsome Rack in SaMo
I saw this handsome bike rack by the Santa Monica Pier on Friday, right by where Cirque du Soleil was setting up. I don't know whether it belongs to Cirque or to the City of Santa Monica, but I hope the latter, and I hope we see more of them. 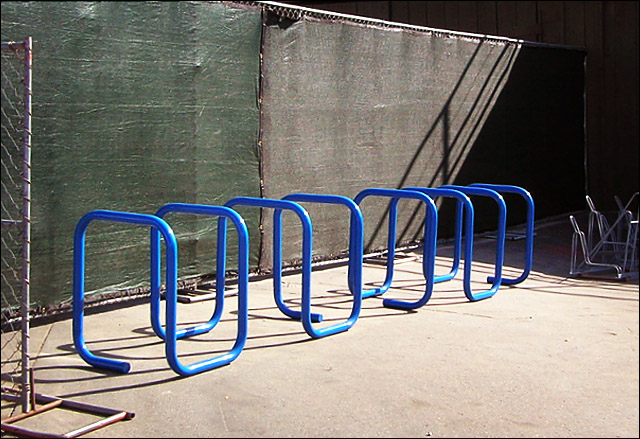 With two mounting points it is as easy to install as a wave rack, but with the clever bend it provides as much support to parked bikes as a row of inverted-U or staple racks. And it looks a bit less utilitarian than either, while actually being more so.

Note the crappy "wheelbendeer" racks sulking in the shadows behind it!


Thursday, January 19th
Offsite Blogging XLVII
Two more for the week, with my post for Orange 20 covering the coming slew of sidewalk bike racks on downtown LA's Broadway shopping street, while on Flying Pigeon LA's blog I return to my favorite subject of bicycle wayfinding signage, and the lack thereof in Los Angeles--along with a couple of sarcastic doctored photos.

Friday, January 13th
Parking in Style
Probably the most successful, if small, bicycle-friendly neighborhood in Southern California is the boomerang-shaped district that follows Abbot Kinney in Venice from Venice Boulevard to Main Street, and continues on into Santa Monica's shopping street. Both Los Angeles and Santa Monica have put pretty intensive (for here) bicycle infrastructure into place: lots and lots of bike racks in both places, sharrows on Abbot Kinney, and bike lanes on Santa Monica's portion of Main Street, to be followed soon by bike lanes on LA's portion of Main, plus some rumored improvements to the street markings on Abbot Kinney.

And it works! Both streets were swarming with cyclists when I passed through earlier today, and I locked up to the last open spot on the bike racks in front of Intelligentsia Coffee in Venice, pictured below. (There are six racks, if I recall correctly.) 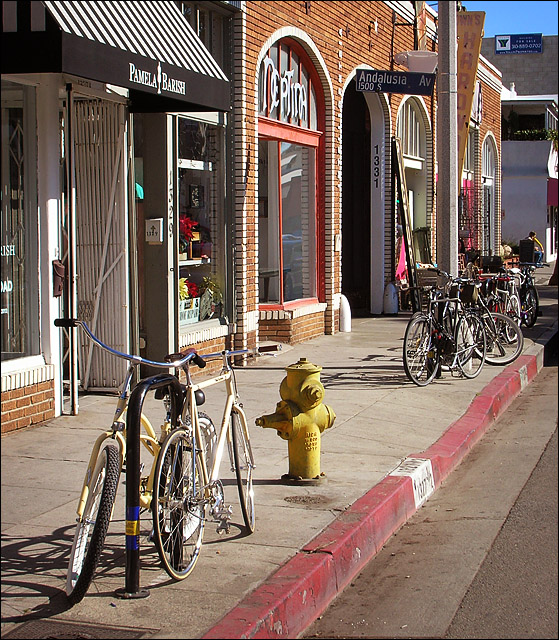 The coffeehouse itself was full to bursting with customers, of course--as were the other establishments fronted by bike racks on both streets. This was in the middle of the day of a Friday; Sundays are much more crowded, with many more bikes.

In fact, Santa Monica offers permanent Sunday morning bike valet service in front of the weekly farmers' market on Main. I've seen it full even on cold and rainy days!

In other words, bicycle infrastructure isn't a "handout" to cyclists, as some bitter nags would claim--it's an investment in your local businesses and and your neighborhood culture.

And puts much less of a burden on the taxpayer than pandering to cars!

How much expensive street space would have been required had the riders of those bikes all driven there alone in cars, as drivers usually do? Of course, we could knock down some of the businesses to build a parking lot or structure...but that wouldn't help much, would it?

Wednesday, January 11th
Offsite Blogging XLVI
I report on a small victory on Orange 20's blog this week in Now You See It, Now You Don't, where I detail how a few minutes spent filling out an online form brought about the removal of a pirate newsbox that was blocking a bike rack at my post office.

And looking ahead, I write about back-in angle parking and its benefits for cyclists, motorists, and merchants on the Flying Pigeon LA blog in Flipping Out Over parking. We really ought to try this in Los Angeles.....

Wednesday, January 4th
Offsite Blogging XLV
We start off the new year's blogging with a call for more participation by LA's cyclists in the planning process at Orange 20, in Okay, It's 2012 at Last--Now What?

And we take a second look at the comparative efficiencies of bike vs. car parking at Flying Pigeon LA, with Drop Before You Shop? 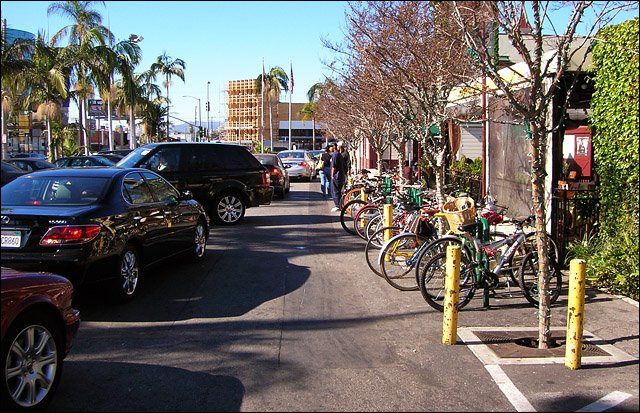 Note that there are as many bikes as cars visible in the photo, and that the cyclists are in the Market shopping, while the drivers are sitting and stewing, and getting out of the mood to spend....

Clearly, the way for the Market to support its customers and merchants is to add more bike spaces, since this corral was almost full, and cyclists were parking at poles and street furniture...which at least they could do, unlike the drivers.

The Farmers Market is sort of an American souk, and one of the more popular shopping and casual dining destinations in LA. There are more bike racks on the other side of the Market, but they are of the inferior "wheelbender" type. Nevertheless, most of them were full as well.

Too bad the merchants can't tell how many of their customers pedaled up, rather than rode the dinosaur....

Sunday, January 1st
Book Review of Republic of Drivers
I have just posted my review of Cotten Seiler's short but rich "cultural history of automobility in America," Republic of Drivers, over at our sister publication, The New Colonist.

Seiler's work examines how it was that the automobile became such a dominating factor in US life, and presents a thesis that the delusions of power and freedom associated with personal driving served to placate a workforce whose self-esteem was shattered by the transition from "proprietary capitalism"--small businesses and artisanal manufacturing--to "industrial capitalism," the aggregation of workers into large enterprises as cogs in someone else's machine.

The compensatory function of driving, with its promise of freedom of movement and mastery over time and space, was heavily promoted by corporate, government, and citizen groups even as the needs of the car imposed tighter and tighter restrictions on urban form, diminished choices in transportation, destroyed natural communities, and engendered a proliferation of authoritarian control mechanisms tied to driving.

Seiler's analysis helps explain why the car became a sort of sacrament in America, and why attempts to promote such an American value as freedom of choice in transport are met with such vicious opposition.

I hope my review, which you can read here, does this fine book justice--and spurs people to buy it.