What's Bicycle Fixation doing on Black Friday? Well, even though we share initials with that artificial holiday, we're not sitting at the computer biting our nails while counting sales. In fact, we haven't even set up a promo. Why? Because we believe in making our....

Well, even though we share initials with that artificial holiday, we're not sitting at the computer biting our nails while counting sales. In fact, we haven't even set up a promo. Why?

Because we believe in making our money the old-fashioned way: by offering real value all the time. Our designs are well-made, practical, elegant, and fairly priced, and that's the way we sell them 365 days of the year.

Furthermore, we suspect that an economy that depends on a vast spasm of knee-jerk purchasing conditioned by sales and ads on one weekend of the year is probably not sustainable. And we mean profit-and-loss, cashflow sustainability in this case. It means you're counting on a nearly irresistible conditioned reflex to sell enough of what is often technically called "crap" to make your nut for the year.

Good lord, what happens if people start making sense? If they decide that being driven into debt by a shallow anxiety doesn't really dovetail with their sense of a holiday tradition?

Then we also wonder why this stuff has to be pumped so hard and so desperately that the entire country conspires to make an amateur gladiatorial match out of shopping for gifts for a holiday celebrating an anti-materialistic prophet.

Black Friday may likely even cannibalize cashflow from the previous several weeks as people put off purchasing to wait for sales (or "sales events" as they seem to be rather stupidly called these days).

We "make our nut" every month of the year, except February sometimes...though the pattern faltered in the depths of the recession. We like to think that it's because we sell something that is both physically and socially useful, emotionally pleasing, and competently made.

So on Black Friday, we chased fundamental realities by heading west to the ocean, the grand and elemental Pacific, and watched the happy folks riding their bikes along the beach path far below the Palisades: 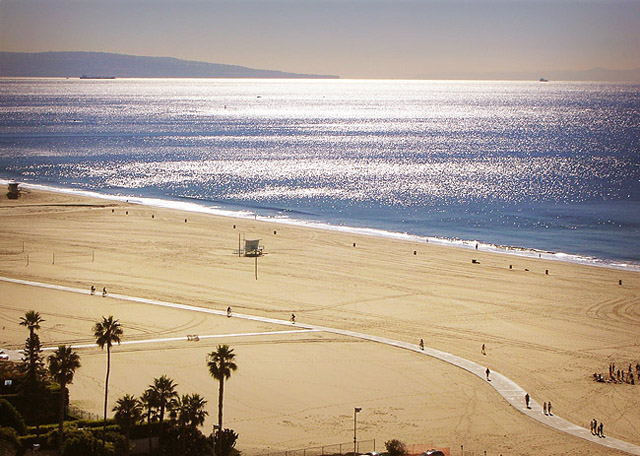 Not bad for November...though in reality we need the rain promised for Saturday night much more than we need yet another dry week.
----- 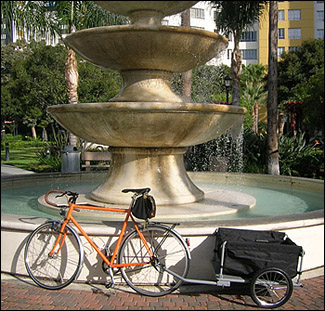 In other news: last week Gina decided that I would never get off my hands and order a bike trailer, so she did it for me...and an Aosom brand folding trailer showed up at our door.

The company's website is primitive, the orthography amusing, and the photos half-baked, but the trailers have a good reputation among buyers, to judge from Internet chatter. They claim a load capacity of 180 pounds, or about 82kg, which is enough to let me run inventory from the factory to home (where, alas, we still maintain our operations, though we hope for a small office/fulfillment center next year).

No more pleading with the bus driver to let down the wheelchair ramp so I can roll a dolly loaded with two giant boxes on board!

The photo is from the first test run; we traditionally ride new builds a few blocks to the fountain in Park La Brea, and so I loaded by heavy mechanic's tool case in and pedaled away.

A bit odd feeling--I've never pulled a trailer before--but we made it there and back.

I'll report more fully in a year or so, when I've had a chance to give it a real workout.