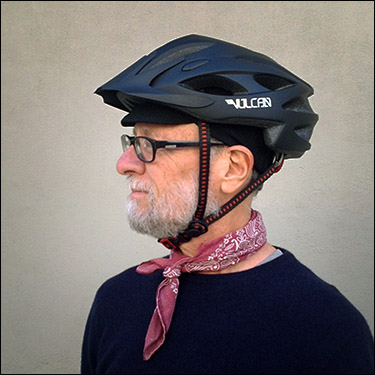 While I can't say that I actually tested this helmet's performance—I circumstance for which I am most thankful—I did wear on numerous short and long rides for several weeks. With the weather almost pyschotically erratic here lately, I was able to judge its fit and comfort on both cold and unseasonably hot days, and even a through bit of rain.

The "Vulcan Premium Multi-Sport Helmet" looks more like a dedicated bicycle racing helmet to me, but it is a very handsome one. Its shape is visually well-balanced and sporty looking without going to the goofy extremes you often encounter in bike helmets, and which drive so many non-enthusiast riders to use the more low-key BMX/skate helmets instead. Particularly pleasing to me is its matte finish on the black one I tested (there is a matte white as well); it gives it a strong but businesslike appearance. Bike gear—or bikes themselves, for that matter—that appear to have been styled after the gaudier of the late 'Nineties running shoes do not appeal to me. The Vulcan doesn't scream for attention. Though if you do need to scream for attention, the company offers glossy, colored, and multi-colored lids as well.

The adjustment mechanism works very well; I fitted it to my noggin in no time, and did not feel the need to readjust it for the first six or eight rides. After a while, the chin strap did loosen up slightly—as they all seem to do—but it kept adjustment longer than others I've worn, and was comfortable.

If you're a weight weenie, you'll appreciate that it weighed an entire ounce less than my own Bell helmet: 9 vs 10 ounces, or a mighty 28 grams.

Construction otherwise appeared to be fairly standard, and it complies with the really quite lax CPSC standards; I was told that future models may pass the far more realistic Snell test, which few if any bicycle helmets presently do.

It felt slightly cooler than my Bell (also a black helmet) in very hot weather.

My only objection was to the visor, which has a scalloped bat-wing pattern on its leading edge; this continually distracted me, so I took it off. Since I always wear a wool cap under a helmet, to protect my bald spot from sun coming through the vents, I don't need a visor anyway. I did put it back on for the last two or three rides.

One other point to ponder is the price point, where the Vulcan does very nicely: at the time of this writing, it's only $29.95, a good deal if you need a skid lid. (This is the price at the manufacturer's website.)

All in all, it's definitely worth considering.

By Leatherup.com, purveyor of motorcycling gear who may be looking to the post-petroleum era with this hat.