I was feeling sluggish this morning--haven't been sleeping well, which always reinforces the truth, for me, of the saying that "The Tour de France is won in bed." Well, even the lanterne rouge of that great race has nothing whatsoever to fear from me, but the value of a good night's sleep to a happy ride remains. Nevertheless, I went ahead with my vague intention of yesterday, which was to ride up (and up, and up) Nichols Canyon till it joined with Mulholland Drive, that justly famous road that winds along the main ridge of the Santa Monica Mountains from Hollywood westward, and follow it as far as Benedict Canyon, which I hadn't so much as glanced at for many years.

I was a bit reflexively grumbly at having to follow my former route to work for the first three or four miles, but on a mild and quiet Sunday morning I soon got over it, and enjoyed having the streets mostly to myself. From where we live to the foothills is pretty much a straight run through the residential neighborhoods of West Hollywood, lined with little houses, mostly in faux-Spanish style, some impressive old duplexes (basically two full-sized houses stacked over each other), and occasional apartments, all screened by a variety of trees. Intersections with main streets sprouted bistros and boutiques, and towards the end of the approach I cut through Plummer Park on a short dirt path. Trending steadily but slightly uphill all the way. 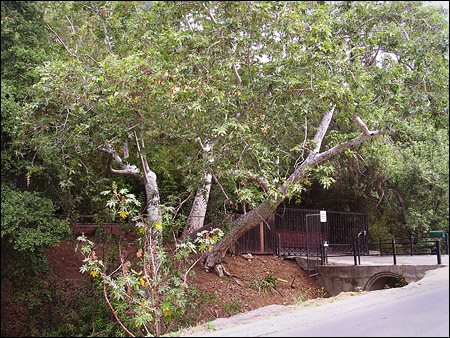 The little creek in Nichols Canyon.

That changed immediately once past Hollywood Boulevard, when Genessee changed its name to Nichols Canyon and began its steady climb to the sky. The road is narrow but little-used, and is bordered by small but expensive houses and a tiny creek, which I could hear but not see. The trees became more profuse, and I could catch glimpses of wild chaparral on the hillsides behind the lots. The narrowness of the road keeps people who don't live there from using it much, so on a Sunday morning it was a relaxing climb, not so steep that facing it on a fixed-gear was at all daunting. 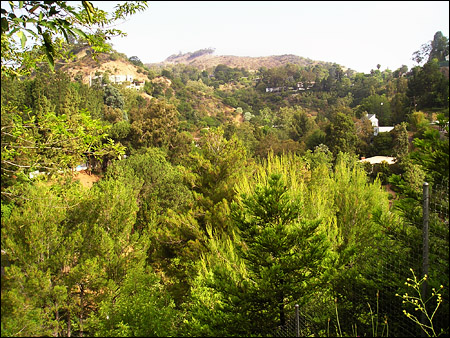 Nichols Canyon seen from above.

Another characteristic of the road that keeps people away is its habit of turning ninety degrees at obscure intersections, so that if you keep going straight you'll suddenly discover that you are on a completely different, and often dead-end, road. Having remembered this from rides past, I'd refreshed my memory at an online mapping service, and, like the Boy Scout I never was, I was prepared. 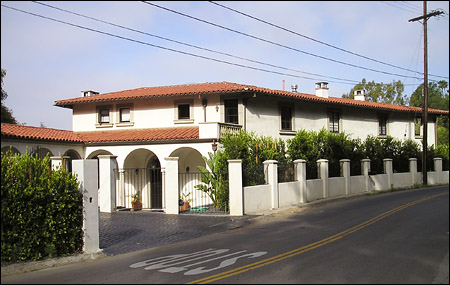 A modest house in the canyon.

The road soon leaves the canyon that gives it its name and begins to climb the canyon wall in long, lazy loops. As you climb, the houses become somewhat less modest, but the steep terrain fortunately has (so far) kept anyone from building any of the hyperextravagant monstrosities that afflict the wealthier sectors of our flatlands. In fact, they're really quite nice--nice enough that a friend of mine who is an architectural photographer lives happily at the top of the road.

No time to visit today, though, so I turned onto Woodrow Wilson Drive for a short but dismayingly steep pitch that (with the help of some weaving) brought me and the Bottecchia to Mulholland. 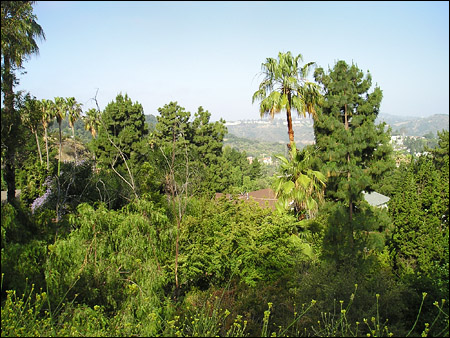 Looking down Laurel Canyon, once the haunt of rockers such as Frank Zappa, Neil Young, and Joni Mitchell (though not, to tell the truth, this part of it).

Everything you may have heard about Mulholland is true: the impressive houses, the spectacular views, the richness of landscaping, with the deep green of native plants setting off the incandescence of bougainvillea and other imports. Canyon after canyon falls away from either side of the road, leading the eye to the San Fernando Valley and its vast tracts on one side, or West Los Angeles and the ocean beyond it on the other.

The road itself, once you're up there, is not challenging: it rises and falls, of course, but never steeply and never far, and the looping curves mix up your cadences enough to keep things interesting. I rode on, passing Laurel Canyon and Coldwater Canyon, and finally coming to Benedict Canyon, which I had chosen to explore on the descent. 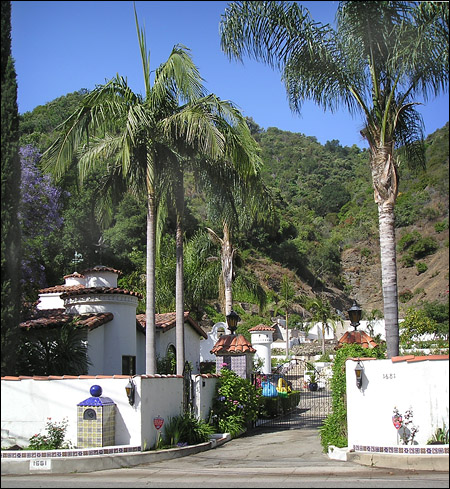 One of the more modest hovels in Benedict Canyon.

On the fixie, I could explore indeed, keeping my speed down without having to take a death-grip on the brakes. The road surface was fairly new, the views again spectacular, and the architecture even more expensive than before--including one house with a stone-and-wrought-iron gate and matching gatehouse, all covered with dark green ivy as if we were in some dry and vertical version of old England! This is actually the northern hinterland of Beverly Hills, and as I descended, the houses became grander and grander, till some of them occupied half a city block.

After a long, lazy drop back to the flats, I found myself in Beverly Hills proper, at Santa Monica Boulevard. So I did what any proper Angeleno would do, and headed to the beach!

After a pretty rough couple of weeks, it was nice to work the kinks out of both body and soul with a hard yet sweet ride. Try it if you come to LA. I might join you!