Ride Report: Half & Half
by Richard Risemberg (Los Angeles, January 2008)

So I finally managed to get together with pal Mort for a hike in the hills.

Los Angeles is notoriously difficult for friendships, what with the distances so great, the traffic generally hideous, and parking always cluttered by all those other people taking "your" space; indeed, I find it far easier to get together with my cycling comrades, be it for a ride or for a coffee or beer, than with my friends who are still trammelled by the putative "freedom" of the automobile.

Be that as it may, Mort and I arranged to meet at Will Rogers State Park, formerly the home ranch of the great comedian and commentator, and now a gateway to the lion-trawled wilds of the Santa Monica Mountains, I by bike, he by car. I saddled up on a clear, cool LA morning, headed down the block to Wilshire Boulevard (LA's main main drag; the city is so big there's more than one), and headed west.

Leisurely I rolled past Fairfax, through a still-sleepy Beverly Hills (no stars or socialites visible, just restaurant, salon, and boutique employees trudging from the bus stops), past the hidden fields of the country club, and down the long, winding corridor of condo towers that funnels you into Westwood. The traffic was still light, so I didn't veer to cut through the grounds of the VA hospital but went on through to San Vicente and turned right. 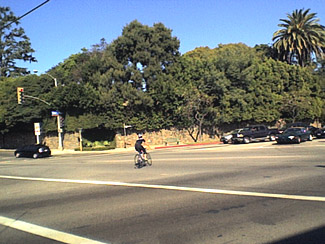 San Vicente cuts through a cluster of boutiques that marks the center of Genteel Brentwood and then shoots pretty much straight to the beach, running between the hedgerows of the wealthy on one side and the ivy-clad fencing of yet another country club opposite. It's wide and smooth, with a broad bike lane, and much favored by roadies for training. A broad grassy median runs along the center, and there are few traffic lights or intersections of any sort; between the trees, the flower gardens, the sweet ocean air, and the handsome or lovely (your choice) runners on the median, it makes a nice route to the sea. However, I turned north at 26th, cutting through another exclusive pocket of unaffordable housing to Sunset Boulevard.

Sunset here follows the contours of the foothills and is usually afflicted with the most boorish drivers in the county; however it was early enough they were all still in bed reading stock market figures on their bedroom flatscreens. In any case I soon came to the back entrance to the park. 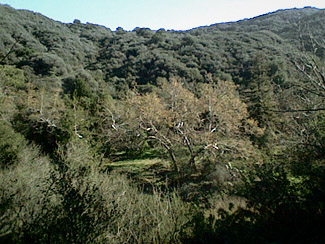 You can't drive into said back entrance, but you may walk or ride through the two little man-gates there, if you can find it. (I almost rode past.) Once in, you ride up a gently series of switchbacks shaded by a melange of native oaks and imported eucalytpus trees, your tires bumping lazily over seed pods and fallen twigs. At the first turn I saw a full-grown doe in the roadway; a quick call-out sent her hopping, though in a rather desultory manner, up the slope, where she effectively disappeared (to human eyes, at least) into the underbrush.

The climb was not so steep I needed ever to get out of the fixie's saddle and actually work hard, and I arrived at the polo field relaxed and refreshed.

Mort arrived shortly afterwards; I locked the Bottecchia by the ranger's office, and off we went.

The first part of our hike took us up the Backbone Trail, the beginning of a footpath (officially shared with equestrians and mountain bikers) that ends up, fifty-five miles later, at the beach north of Malibu. One of my favorite bits of bureaucratic humor occurs just past the trailhead, where a sign explains in drab official language that you are entering mountain lion habitat, and provides you with some interesting facts that, if deconstructed, are really telling you that you stand a chance of being eaten if you go on. (It doesn't happen often, but it has, in fact, happened recently.) Being of statistically sound minds, we went on; since we were blabbering the whole time, any lion in the vicinity would have plenty of notice, and thus have plenty of time to move away, if not hungry. 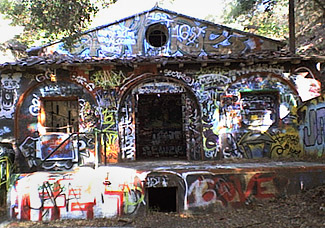 It's a steep, dry, scrabbly climb along a desert ridge, with regular vistas of the city and the seashore, as well as of course the broad sea beyond, and quite exhilarating--though we were happy for the cool weather! We met with three or four MTBers and a couple of other hikers on the way, and soon found the unmarked trail leading down into Rustic Canyon.

The scenery changed immediately, and we were walking through a tunnel of bay laurel, toyon, various oaks, and a number of small flowers in yellow and violet, along with some soft grasses that the recent rains had inspired to burgeon hopefully forth. The descent was steep, but not so steep that we ever let up on conversation, talking mostly of Middle East politics (Mort is Persian and I'm Jewish), and of filmmaking (Mort work in "the Industry").

Soon we were at the bottom of Rustic Canyon, a mile or so downstream of the Boy Scout camp. 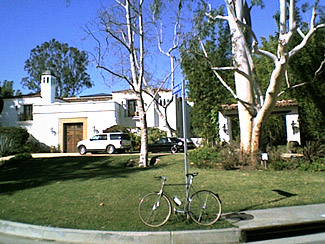 Rustic Canyon in its upper reaches has a broad, flat bottom through which winds a skimpy stream shaded by sycamores; a little below where we entered it it narrows considerably, so that the hillside oaks loom over it and add to the shade. It was, early in the 20th century, a writer's colony, mostly of scriptwriters, and just before World War II housed a secret Nazi spy cell who had built a small power generation plant mid-canyon; this plant was to provide electricity for propaganda broadcasts which the Nazis hoped would turn the US population against the government when Hitler finally invaded the US. Apparently they were not so secret as they presumed, for the day after Pearl harbor, the FBI walked in and took them off to jail. The shell of the power plant remained, as well as the quaint cottages of the writer's colony, till a fire in the '70s destroyed it all, and the state took it over and added it to the park. For several years I used the shell of the burned-out powerplant as a photo studio.

I gave Mort a tour of this and other assorted curiosities--such as the underground bunker filled with warring scrawls from neo-Nazi punks and liberal poets who at different times have occupied it--and then we plunged farther downcanyon; here it narrowed to a vertical slot with walls a good fifty feet high, and sometimes we had to walk in the stream to make progress.

After much scrambling (and one fall into the stream for Mort), we found the trail that returned us to the park, where my friend and I parted ways. 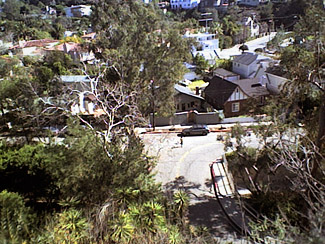 I got back on the bike and wandered a bit on the ride home, retracing my path only as far as Amalfi Drive, where I turned south towards, I thought, Wilshire Boulevard. However, after easing down a street of Fairly Large Houses (this is where the other .01% lives), I found myself on a high curve overlooking Santa Monica Canyon. I was a but a few hundred yards from the Pacific! But I was also hungry, hungry for something better than I would find in a beachfront snack shack, So I rode down into the canyon and then right back up the other side, where I knew I woudl find San Vicente Bouelvard again.

From there to a decent coffeehouse on Wilshire, then a jog south to Santa Monica Boulevard and its surprisingly effective bike lane, which took me quickly home.

About twenty-five miles on the bike, about eight on foot, and about as varied a scenery as you could find in any city in this country, I would guess. A mighty nice Sunday morning in LA.