A few days ago, over on the iBOB list (which is more or less my corner bar on the Internet), someone posted a link to a YouTube video of seven-time Tour de France winner Lance Armstrong indulging in some madcap fun, riding with a bunch of fixie punks on the streets of Austin. All of them--Lance included--behaving the way twentysomething freestylers love to do when "showing class" in public. (To "show class" is an old outlaw motorcyclist's term that's the contemporary equivalent of the dadaists' injunction to "épater les bourgeois.")

In other words, they were riding like messengers who were short the price of a beer for their day's labor....

Before long, the inevitable responses accrued on that most wordy list--a happenstance so readily foreseen that one member sought to deflect it by posting the following:

Before the list gets all caught up in bashing it, yes there are some extremely lame and dangerous moves causing untold years of set back for cyclist's rights.

I still enjoyed it.

Other posts followed, making the point about "cyclists' rights" much more seriously, and the importance of being role models (aimed at Lance, of course), and so forth.

For one thing, cyclists' rights will not be set back because a few punks act up. Those rights are enshrined in both law and tradition, and have only been expanded (at least on paper) in recent years.

In fact, cyclists have more right to the roads than motorists--even to roads that have been, as has been typical for at least the last half-century, designed with an excessive accommodation of the capabilities and limitations of the car.

If you wish to drive a car in the US and most other parts of the world, you must apply to the state for permission, pass tests, and agree to abide by complex rules, disregard of which can land you in jail at times. The state can revoke your privilege for any number of reasons, including your personal habits (an inclination to drive fast, a love of inebriation).

Bicycling, however, is a right; you need not ask permission before riding your bike on the roads, and your right to do so cannot be taken away--though it can be limited, as bicycles are not allowed on most freeways and on some bridges and tunnels in the US, and some municipalities forbid sidewalk riding.

The accusation of "arrogance" and "lawlessness" leveled at cyclists--not just in rabid motorhead forums and clueless news shows, but in our own cyclists' forums, including my beloved iBOB list--that accusation is equally specious. Nothing cyclists do can come close to the smug arrogance or casual lawlessness of the typical driver. I addressed this in a post on my blog at MyByk.com, which I will quote in part here:

...Well over 50% of the motorists I see when I'm on the road roll stop signs...but they're not arrogant.

On my two-lane residential street, home to about 800 souls, posted for 25mph, complete with speed humps and traffic lights at both ends, motorheads frequently drive 40, 50, and 60mph, sometimes even effecting high-speed passes mid-block...but they're not arrogant.

They also double-park, obstructing everyone's way, up to six on the block, or park for the night blocking apartment driveways...but they're not arrogant.

They occasionally shout at us to get off their road, when they pay proportionately far less in taxes for the roadspace they use than cyclists do for theirs...but they're not arrogant.

They whine and snarl over pittances allocated to cycling infrastructure, yet demand unending trillions be spent on roads, freeways, and parking lots for their fat-assed convenience...but they're not arrogant.

They complain about the bikes beside them on the road, and the drivers in front of them, yet never apologize to the folks behind them or on the cross streets they blockade...but they're not arrogant.

So why aren't news shows and forums abuzz with complaints about motorist's lawlessness and arrogance? Seeing that motorists not only kill well over 40,000 human beings per year in the US alone, but are steadily destroying both our culture and our very planet?

Simply because there are lots of motorists, and because most people in the US are motorists themselves, or their friends and relatives are motorists. To criticize motorists is to criticize themselves. So the carnage continues, and the boorishness is always excused in oneself and one's class.

Bicyclists are still relatively few in the US--I mean practical bicyclists, not recreational cyclists who load the cruiser or the carbon race bike onto the SUV roof rack for a trip to the beach. Transportational cyclists are still rare enough to be categorized as "other," and thus fair game for prejudice and scorn. Their increasing presence also requires motorists to change their perceptual habits and include them in what most drivers seem to consider distractions from the cell phone, the CD player, and the radio, that is, anything going on in the illusory-seeming world beyond the windshield.

And, of course, motorists are often stuck in traffic jams that consist mostly of people exactly like themselves, whom they hate for being in their way. But they can't openly and honestly hate or blame them, as they wish to, without hating and blaming themselves. And here comes a bicyclist zipping past, untrammeled by congestion. Of course it's his fault, because he's not like us!

What will change this situation is what has changed it in the more advanced cultures of the world--the Amsterdams, the Copenhagens, the Japans.... And what is this?

Well, it's not bike lanes, in fact. (There are few in Japan, which is more of a bicycle paradise than Amsterdam.) It's not much in the way of bicycle infrastructure, which (except for more bike parking) is expensive and redundant.

It is simply numbers. The more people that are out bicycling, the more bicycling will be respected, even by motorists. Because motorists will be cyclists too, or will know and love people who are cyclists, and cyclists will no longer be "other."

A careful British study on bicycle safety found that cyclist traffic deaths were much lower in the 1950s in England even though there was absolutely no bicycle infrastructure of any sort--no bike paths, no bike lanes, nothing but the streets. But cycling accounted for 25% of all travel, so cyclists were everywhere, as a normal part of the street. Whereas now England is full of bike paths and lanes, but cyclists are less safe than they were fifty years ago--because they are few. (However, cycling in Britain is still safer than driving in most other countries!)

If bike paths have any utility whatsoever, it is in maintaining an illusion of safety to get more people riding in the real world, and those more people will in themselves actually increase safety. For bike path riders have a higher accident rate than street riders, everywhere. 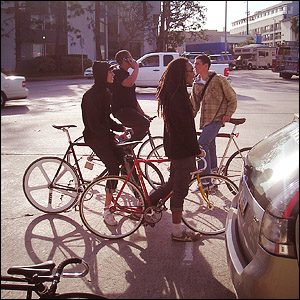 But what will really get more people on the street? I suspect it will be videos such as the one disputed on the iBOB list, showing, in one fell swoop, not only hip young folks but a beloved middle-aged celebrity riding freely and skillfully on streets like any other street, in a town like any other town, wearing street clothes, not confined to a linear cycle ghetto, and actually having fun while they ride!

It's possible that the best thing that ever happened for bicycle safety is the much-maligned fixie hipster explosion, which just might make cycling, and bicycles, as prevalent as pants.

Fixie punks love cycling, and they love it enough to integrate it with their daily lives. They ride nothing but what roadies deride as "junk miles": not a heart rate monitor in sight, no sausage-casing of spandex outlining the genitals, not training for anything, but riding in the moment. Riding to work, to a bar or coffeehouse, to a concert, to a party, or just to ride. Wearing clothes that are recognizable as shirts and pants, or even skirts or dresses. I don't think they need role models--I think they are role models. People who ride as part of their daily lives. Only an idiot would call those "junk miles."

One of my colleagues from the BOB list, a little older than I, and also (as I am) a vehicular cyclist in the style of John Forester, talks often about the importance of being a role model. But we were, and it didn't work! When these kids were growing through skateboards and BMX, and preparing to blossom as streetriders, we were available as role models. Not a lot of others were riding bikes day to day. And the kids ignored us--of course. Why would they want to emulate a bunch of old farts? Hell, we didn't, when we were their age--or we would have been driving Chryslers!

Instead they took the hard-living, swift-riding, wedded-to-the-asphalt bicycle messengers as their role models. And, style aside, in the traffic-jammed world of today, that makes some sense.

When I ride in my fifty-five-year-old graybearded glory through downtown Los Angeles, I start to ride like a messenger too. it's not because of an unfulfilled lust for tattoos and Pabst Blue Ribbon--no, it's simply because in the howling, swarming chaos of those streets, it is the logical way to ride, if you want to get somewhere, and get there alive. You go where the cars aren't, you possess the negative space, you slip through dimensional gaps that are imperceptible to those poor souls encased in steel cocoons. It is safer, and it is faster. And you don't have to ride hard to get somewhere.

In fact, most downtown messengers I see are not humping at top speed down the boulevards...because they don't need to be. The bicycle allows them to use space that doesn't exist for others, and to travel quickly without going fast.

Of course most fixie punks aren't messengers--but I do notice that many of them have highly-developed bike handling skills--better than mine are even after my forty-five years of experience. If people want to copy that, and develop those skills, and dedicate themselves to riding on the streets, where bikes belong, rather than wobbling timidly along a bike path or sidewalk, then that is better, not worse, for bicycling.

Because the more people are out there, the safer bicycling will be, and the more, and more and more, popular it will become as a good way to get around, without divorcing yourself from the Earth, your neighborhood, and, ultimately, your life, as you must in a car.

The more the merrier, they say. And it's true.