Sometimes you hear about a product that is simple, unexciting, inexpensive, totally unglamorous, and absolutely perfect..and so it was a few weeks ago when the designer of the Helmetlock contacted me to see whether I would like to test his device in Bicycle Fixation.

What is it? Nothing more than its name implies: a way to secure your helmet to your U-lock, chain, or cable, so you can leave it on your bike in relative safety. 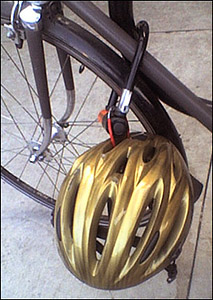 I was of two minds about this product, as my present helmet is rather shabby and I have been hoping someone would steal it, so I'd have an excuse to buy another. But of course, I'd really not rather spend the money (or I'd have done so already, right?), so I usually, on rides where I use the helmet, slip an arm of the U-lock through the chin straps in such a way that to take the helmet you'd have to cut the straps, rendering it semi-useless.

I realize, of course, that fixing a chin strap is no big deal, and also that bike helmets are getting a bit expensive these days.

The Helmetlock is a simple figure-eight twist of steel cable, coated in a thick vinyl-like substance to keep it from scratching helmet or bike frame, and run through a similarly-coated heavy industrial fastener that is too big to fit through any helmet vent. The ends are then crimped together tightly, as you see in the photo.

You push the large end of the loop through a helmet vent, run the arm of the U-lock, or the end of your cable or chain, through it, and lock up. So they'll have to have a cable-cutter at least to get your helmet.

I found the Helmetlock to fit fine in a saddlebag or even my back pocket, and it couldn't have been easier to use. And, besides providing a bit of security, it quite naturally places your helmet in a top-up position, keeping the inside safe from anything that might fall out of the clouds or a passing bird!

Here is designer Blake Mills's story of the Helmetlock:

I've been riding my bicycle as my primary form of transportation in San Francisco for about a year now. Sometimes I drive, but for daily errands and getting around the city I ride my bike. About six months ago, I was headed to a Green networking event, and had chosen to drive there even though it was less than a mile away. Why? Well, I didn't want to carry my helmet around at the networking event.....

As I was driving home, I recalled leaving my helmet behind three times that week: once at REI (they found it and put it behind the counter for me), once at the counter of a sandwich shop (they brought me a turkey sandwich with a side of helmet), and once at the post office (had to go back in and get it, that time.)

When I got home, I decided that there had to be a better way. I rummaged through my house looking for something that I could use to secure my helmet, and I found it in my rock climbing gear..... For the next few months I used a clunky $60 rock climbing belay device to loop my helmet to my U-Lock.

During those months, I started noticing how many people were walking the streets of San Francisco with a bike helmet under their arm. I wondered if there might be a way to solve that problem for them.

So I started tinkering.... For weeks I went to the hardware store almost every day. After several dozen attempts, I came up with the shapely figure-eight design and it worked great! I put my belay device back with my rock-climbing gear, and started showing people my new invention at bike racks all over the city.

People loved it! So I put up a website and started mass producing them. Which I guess is where we are now..... I'm working with several local bike shops on the packaging for in-store sales, but right now the only place to get them is online.

I recommend the Helmetlock; it's light and convenient, obviously more secure than the chinstraps, and leaves you free of encumbrances when you're off the bike.