The Bicycle Culture Institute just sent the most heartening press release about a grassroots Los Angeles race—and its meaning to women and the "youth of today": Inner City Youth With Troubled Past Re-Focus on Athletics L.A. youth step up their game as street race out.... 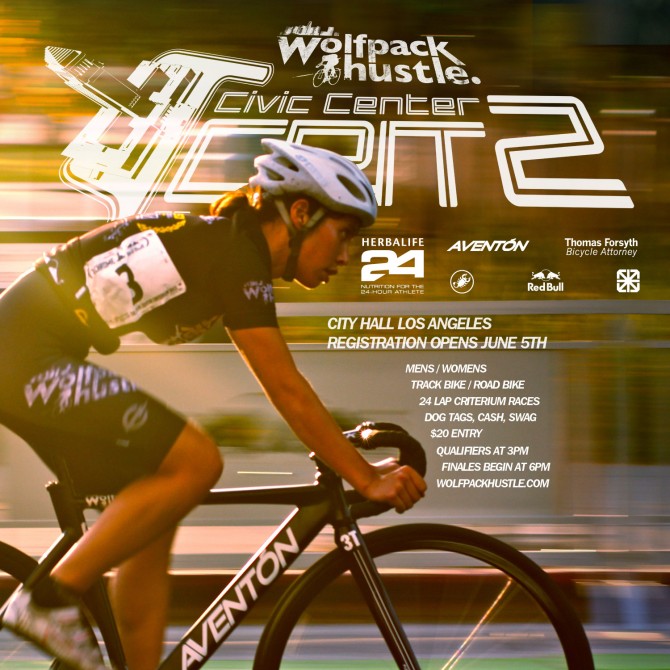 The Bicycle Culture Institute just sent the most heartening press release about a grassroots Los Angeles race—and its meaning to women and the "youth of today":

Inner City Youth With Troubled Past Re-Focus on Athletics
L.A. youth step up their game as street race out grows the city and gathers international attention

The stakes are high this summer: with the July 12th, 2014, Civic Center Criterium drawing international competitors, local youth are focusing their energy on becoming stronger cyclists.

Athletics have long been a tool to build character and prevent crime among youth, especially within inner-city and low-income communities, and this has proven especially true in the case of the Wolfpack Hustle Unified Title Series. In contrast to traditional organized sports, urban bike races offer a low barrier to entry and have a way of converting hooligans into heroes.

Take young men and women like dog tag holder Edgar "Willo" Juarez and members of local racing teams Gorilla Smash Squad and Kushtown, who have found in cycling a healthy outlet for their energy, where they can channel their competitive urges and thirst for street cred into training and personal development.

With low registration fees and little equipment required, these races give young adults an outlet beyond the tagging, drugs and delinquency that underprivileged youth are often drawn to. Here in Los Angeles, the paramount prize is the coveted Wolfpack Hustle Dog Tags.

Daredevil Bike Race Celebrates Equality For Women In L.A.
In an arena that has long been undeniably male-dominated, Wolfpack Hustle's non-traditional races have taken the lead to invite women to their place at the starting line.

While women fight tooth and nail for half the road in pro cycling, Wolfpack Hustle races draw more female competitors with every race, as strong urban cyclists like Jo Celso and Kelli Samuelson achieve accolades alongside the top men in their fields, inspiring young women to clip in and take off.

Ever since their humble beginnings made up of a dozen or so cyclists in cutoffs riding on Monday nights out of Silver Lake thirsty to see who was fastest, Wolfpack Hustle has always supported its she-wolves—like first generation dog tag holder Beatriz Rodriguez, who later went on to attain Cat 1 rating and National titles under the USAC. The chance to measure up against Rodriguez, a legend and inspiration to female cyclists, drew other women on bikes to future races.

Instead of putting out a call for podium girls, Wolfpack Hustle organizer Don Ward chose to challenge women to contend for their place among the world's toughest urban cyclists and win their own dog tags once again on July 12th at the Civic Center Crit set to encircle the Los Angeles City Hall building with a finish line adjacent to the Grand Park lawn on Spring St.

The race categories include a brakeless track bike division for which 55 women are currently signed up. Rather than hold women's races in the shadows of men's, an ongoing discrepancy among the pro circuits, Wolfpack Hustle races have led the way in drawing more women to the sport of cycling. Equal courses, competition time and resources, coverage and awards are among the ways in that Wolfpack has attracted growing numbers of women.