Sunset Boulevard is one of LA's few cycling success stories right now. Not the famous part from the movie—most of that's in Beverly Hills anyway, and the 90210 is notoriously unfriendly to anyone not traveling by limousine. I mean, of course, the portion meandering through.... 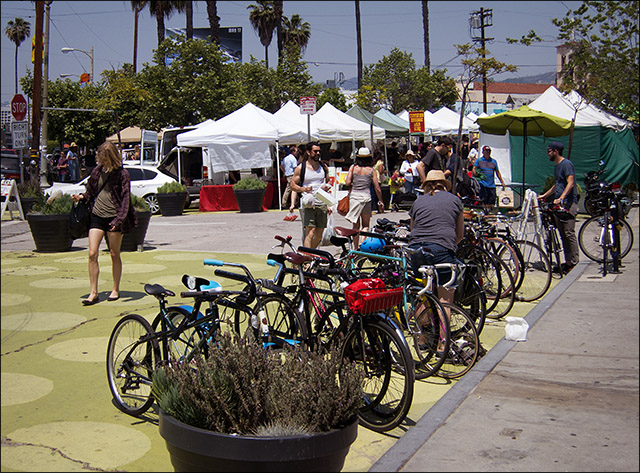 Sunset Boulevard is one of LA's few cycling success stories right now. Not the famous part from the movie—most of that's in Beverly Hills anyway, and the 90210 is notoriously unfriendly to anyone not traveling by limousine. I mean, of course, the portion meandering through Echo Park and Silver Lake, through hills densely packed with mid-last-century apartments, houses, and bungalows, and fronted by a wealth not of glitter and gold but of diverse and clever restaurants, bars, shops, boutiques, and neighborhood services of all sorts.

Need a white-tablecoth vegan meal? You've got it. Need an old-school French dinner? You've got it. Just need a cuppa joe and a sandwich? You've got that, too, and at a decent price. Prefer ethic food? Well, choose a culture, and it's likely somewhere along the strip. Need to buy a dress, a shirt, a pair of shoes, a book, a bicycle, a rare craft beer? You won't have to go far to be satisfied. Hair getting shaggy, teeth aching, worried over taxes, or you've just run out of clean clothes? All taken care of. There's a library too, an obscure but jam-packed Asian grocery, a movie theater, even furniture shops—not to mention a public school.

It's a small city unto itself—perhaps a bit too diverse in both population and merchantry to embody the small town cliché—nestled in the hills west of Downtown. It is also one of the few parts of town where bicycling is prevalent enough to seem routine. (Santa Monica's Main Street is even more replete with velos, but that's technically a different city.)

There are bikes everywhere—in the bike lanes, locked to the many bike racks, coming into and out of side streets. I often choose to ride back from my visits to South Pasadena or Highland Park along this road, simply because one feels at home here on a bicycle…and because the architecture is diverse and often interesting, if also often ramshackle. There are also three or four bike shops along the way, though a couple of them seem somewhat dubious, with their seemingly undiminishable supply of used bikes. The only one I go to is Golden Saddle, run by ex-Orange 20 employee Kyle Kelly and pals, and a friendly, airy shop with lots of city bikes and accessories. (Orange 20 itself is only a couple of miles off.)

One thing I always notice when riding through Echo Park and Silver Lake is how many women are pedaling along the bike lanes. The current perception is that lots of women riding indicates a healthier velovironment, and that's probably correct, though I don't think that women are inherently timid, as that seems to me to imply.

In fact, Sunset may argue that they are not: the bicycle facilities here are nothing more than the usual Door Zone Bike Lanes, and Sunset sees a lot of motor traffic, often fast traffic, as well as hosting two major bus lines. It's also hilly. So why does it work?

I suggest that it works because it offers a rich variety of small, personable retailers. There's a plethora of small shops, bars, restaurants, and service establishments, typically offering unique and often locally-made products and a stunning range of cuisines and atmospheres, staffed by friendly and lively employees. There are almost no "national chains," with their standardized offerings and clock-punching wage-slaves; nearly every business owner and his or her employees are as much a part of the neighborhood as their customers. And there are dozens upon dozens upon dozens of these shops and restaurants, all different, all very good. As a result, hundreds of interesting people roll and stroll from storefront to shop to plaza all day long. It's a place to go to, and it's by far easier to go there, and navigate through the wealth of choices, by bicycle than by car.

The city, recognizing its character, put LA's very first pedestrian plaza—which includes a bike corral—at the west end of the strip, in a bit of reclaimed street now called Sunset Triangle. It was just made permanent, after a year-long trial.

And there are bike racks all along Sunset through this exhilarating neighborhood.

So you have bikeways, though minimal ones; lots of bike parking; lots of people living nearby; and someplace for all those people to ride bikes to. Result: lots of people riding bikes!

Not so unusual—in fact it's a lot like Portland, most of whose bikeways are also just stripes on streets, but which also has a fine-grained retail structure and fairly dense housing, with local offerings outweighing the ever-tedious "national chains" most dimwitted cities pander to.

And that appears to be happening along Sunset Boulevard in Echo Park and Silver Lake, in, of all places, Los Angeles!