Click for larger image I rode up to the Baldwin Hills Scenic Overlook last Sunday, to see what my part of town looks like from the other side. (Well, I rode most of it, but the section of 29% slope was a bit much on.... 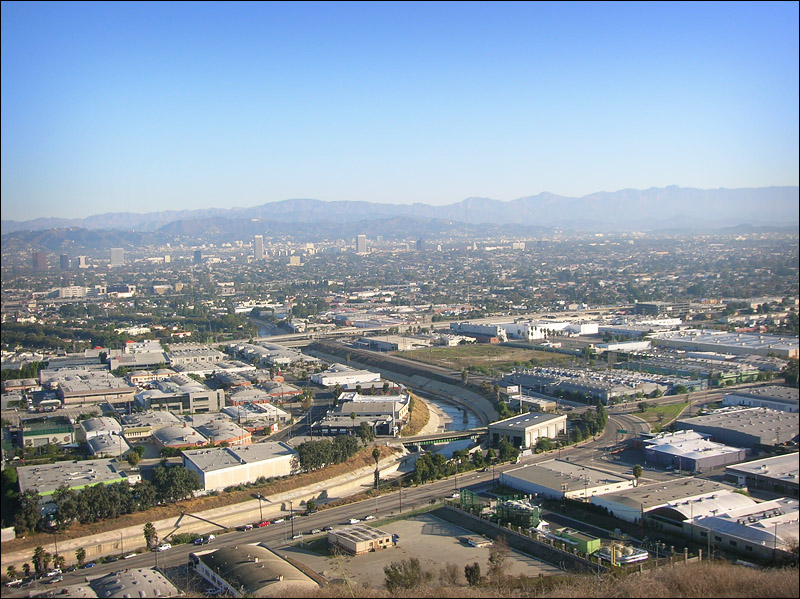 Click for larger image
I rode up to the Baldwin Hills Scenic Overlook last Sunday, to see what my part of town looks like from the other side. (Well, I rode most of it, but the section of 29% slope was a bit much on fixed, so I walked about a third of it.)

There are plenty of scenic overlooks north of Mid-City--the Griffith Observatory, at least half a dozen turnouts along Mulholland Drive--and I visit them regularly. But for a long time there was no place south of Mid-City where you could stop and spend some time seeing the land, the streets, the buildings. This one opened recently, and though the road is a bit insane--I have no idea what, or whether, they were thinking when they cut it--it's doable, and there are even bike racks at the top...as well as at the bottom, for those who wish to hike up the pleasant-looking dirt trail.

I particularly enjoyed seeing Ballona Creek--the concrete channel in the middle of the photo--along which runs the Ballona Creek Bike Path, a sort of "bicycle freeway," complete with underpasses, that lets you get on about a mile upstream and ride nine miles to the beach without the slightest interference from motor traffic. There are plenty of access points at major streets, several neighborhoods, and one school as well. Unfortunately, the underpasses mean that this very handy road is closed on rainy days, when the creek level rises drastically, but during the ten dry months of the year this is a valuable crosstown route for cyclists, and plenty of folks do use it every day.

So, though it might not look like much in the photo, it means a lot to LA bike commuters.

And to me. I've seen where its main tributary springs out of a hillside in a canyon north of Hollywood, after which it flows underground for a while only to surface in a golf course west of Rossmore (and near where I grew up), dive underground again to cross Hancock Park, surface at Brookside, disappear again for a mile or two, then finally arise for the last time near Fairfax Avenue, shortly after which the bike path starts.

At tis seaward end it passes through (what's left of) the Ballona Wetlands, where herons, egrets, and other birds abound.

I've been riding it for at least twenty years now. Nice to see a different side of it at last.