Bicycle Fixation Weblog
Home » Archives » May 2010 » Riding to the Race

What an odd, lackadaisical day it was today! Our morning goal was to go to Cafecito Organico , where master fusion tamale maker La Guera Tamalera has been setting up on Saturdays (soon to be Sundays too, apparently). Great, inventive tamales, most of them vegetarian-friendly....

What an odd, lackadaisical day it was today!

Our morning goal was to go to Cafecito Organico, where master fusion tamale maker La Guera Tamalera has been setting up on Saturdays (soon to be Sundays too, apparently). Great, inventive tamales, most of them vegetarian-friendly, done according to recipes tamalera Deborah originally learned in Veracruz, Mexico. Good coffee, too.

While we were lingering there. we decided to go see the Tour of California time trial downtown, and maybe meet up again with the folks we had passed on 4th Street on our way to tamale heaven...they were heading towards the race.

Of course it was too early, so we went to Chinatown first, and loaded up on dim sum and pastries to take with us to the race course, which was only a mile or so away. We settled in right across from the new cathedral on 1st Street--and promptly found the strangers we had passed on 4th, who soon became friends: Patty, Christie, and Richard. The we settled in to watch the race.

I'm not much interested in racing, being myself not very competitive at all, and much more interested in riding on my own, than in watching someone else ride.

And modern bicycle racing, in which the rider is preceded by motorcycles and followed by team cars, sometimes to the point of seeming engulfed in motor vehicles, is actually in a way abhorrent to me, as regular readers here can well imagine! All the more so when you add up the buses, vans, catering trucks, and other support vehicles...I'm guessing those cyclists are using up gasoline at the rate of maybe 2 miles per gallon as they grind around the heavily fenced in and patrolled racecourse. Not much in the spirit of freedom and cleanliness that characterizes the bicycle to me.

The crowd was fun, though. And most pleasing was the realization that hundreds of the spectators had arrive by bicycle, maybe many hundreds.

So, while everyone else was taking pictures of the racers, anonymous in their billboard suits, I...took pictures of the bikes sprawled out on the lawns behind the sidewalks. Here's a couple below: 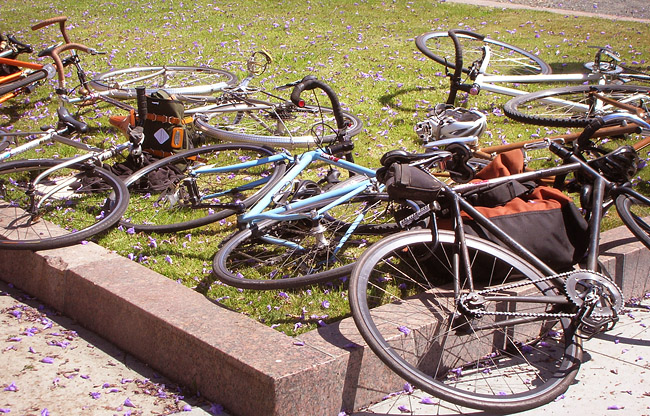 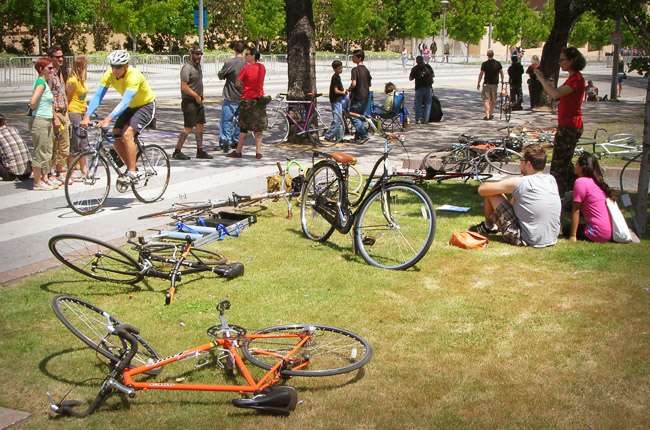 Had a nice, quiet ride home, during which (once more on 4th Street) we met up with Stephen Box and Enci, riding to the Bikeside meeting at Bikerowave, and chatted them up for a few minutes.

Nice end to a meandering day.