[Previous entry: "Bikes and the City"] [Next entry: "Registration Row in Oregon"]

Having had a really awful couple of weeks--business slow in the recession, and a nasty situation developing involving relatives, wills, and an intricacy of contention nearly suitable for a Dickens novel--I really needed a good long happy ride today, going nowhere on no schedule, and....

Having had a really awful couple of weeks--business slow in the recession, and a nasty situation developing involving relatives, wills, and an intricacy of contention nearly suitable for a Dickens novel--I really needed a good long happy ride today, going nowhere on no schedule, and I was fortunate enough to get it!

Unfortunately for our readers, that means you get a couple more Crappy Cellphone Pictures...though this time I have an excuse: my good pocket camera has taken to sucking the juice of its batteries even when it's turned off--no doubt feeling jealous of its slatternly telephonic cousin.

But the pix came late in the ride. I left early this morning (though not as early as I'd thought, having ignored the imminence of Daylight Savings Time), and immediately rode the little Bottecchia fixie up the great slope that takes La Brea Avenue over the Baldwin Hills. I was pleased to note that I made decent time and hardly even had to grunt, as I'd not gone up this hill for several months. I was more pleased to note that traffic was light, for though it's a multilane street, it has no intersections between the start of the climb and the summit, so LA drivers naturally treat it as a freeway.

Once over the top and down past the barren field of oilwells, I just followed la Brea (which presently turned into Hawthorne Avenue) straight south through the old-line African-American communities and into the beige blandnesses of Lawndale, Hawthorne, and Torrance, having actually a really nice, relaxed time on the bike. Storefront churches, hair salons, and barbecue joints gave way to Norms and Dennys diners and insurance offices, then to shopping malls and office parks, with car lots punctuating the cultural and racial dialogues of "Greater Los Angeles" as the road marched on.

My goal was the Pacific Coast Highway where it runs between Torrance and the Palos Verdes peninsula, and I reached it without a trace of fatigue,, turned right, and headed to The Beach.

It was maybe four miles to the beach, but I was surprised at how much the light changed in that short distance. It was already a beautiful springlike day inland, but as the Bottecchia and I neared the Pacific, the light became clearer, brighter, yet softer, and the air filled with a clean sweetness that is indescribable but instantly recognizable even the first time you ever taste it in your life. Signs, leaves, buildings, hills, the little clouds that bejeweled that bright pelagic sky, all glowed from within; the air caressed the skin; flashes of the first jasmine flowers startled some thing deep inside you as you merely breathed.

It was a morning that made everything, big or small, quietly significant.

And then I was on the bike path that runs on the very beach.

The waves fell repeatedly to my left, while people strolled and skated an rode and ran along with me. Oftentimes the slower traffic on the bike path (which is not really supposed to be there) is annoying, but today the light made everybody beautiful, and I didn't care. I rolled along lazily, passing the beach cruisers and the Burleys, the striding legs and windblown hair, stopped at the Redondo Beach pier for no reason at all, stopped again a hundred yards farther at the crowded little Kings Harbor marina, stopped here and there just to look at life going on. What my wife would call an Epic Day.

But when I stopped at Hermosa Beach, at the plaza where the pier is rooted to the continent, I stopped to eat!

And there I saw two bikes I had to photograph, and so inflict upon you Crappy Cellphone Pictures. They were two bikes that I would call "practical bikes"--immensely practical bikes, in fact--but the were as unlike each other as any two bikes could be, I think. There they are, below: 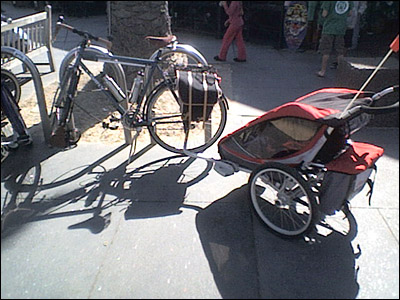 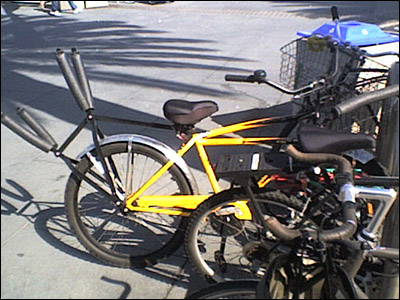 The first is a Surly Long-Haul Trucker, done up in full iBOB drag, with Schwalbe Marathon tires, fenders, mudflap, leather bar wrap, leather saddle, front and rear racks, and what looked like either Ostrich or Berthoud panniers--and pulling a child trailer. Stainless steel water bottles too!

The other is a beat up old beach cruiser outfitted with a surfboard carrier. With longboards back in style again, it's possible that that bike has perhaps the more difficult task of the two!

For me, at least, those two bikes added a little exclamation point to the day.

Belly full and pictures snapped, I mounted up again and rode on home, engaging in idle conversation with a fellow rider for several miles, and stopping again for a look at the beach by the powerplant (one of my favorite little bits of local coast) and again at the Bridge at Playa del Rey.

A quick run up Washington Boulevard and I was home, feeling better than I had for many a day.