[Previous entry: "Training Your Bike"] [Next entry: "No Way to Run a Railroad"]

We spent yesterday riding around San Jose and environs, looking in particular for an experience different from our daily grind of heavy street traffic in LA. San Jose has its share of that, no mistake; but being on a sort of working vacation we could....

We spent yesterday riding around San Jose and environs, looking in particular for an experience different from our daily grind of heavy street traffic in LA. San Jose has its share of that, no mistake; but being on a sort of working vacation we could opt out of it, and so, on the advice of local contacts, we headed towards Los Gatos, a little city on the southern end of San Jose, via the Los Gatos Creek Trail, a grade-separated multi-use path that follows a creek up to a reservoir.

I'm generally no fan of MUPs, which often take you nowhere slowly, but we were in fact going nowhere, and we get plenty of hard riding in at home. And Los Gatos was reputed to be a desireable destination itself, a pleasant little town with decent food. We never got off the path in Los Gatos itself, but the trail itself was a delight--as you can see in the photo Gina took of me as we rode. 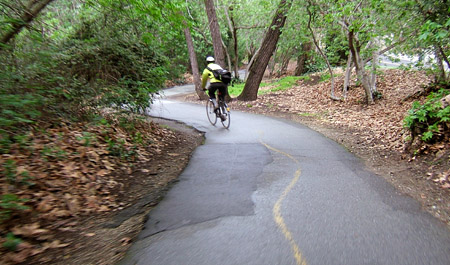 I don't know whether Los Gatos Creek was ever encased in concrete, as has been most of the Los Angeles River, but at present only the uppermost reaches are fully lined; the lower reaches are soft-bottom streambed, lush with shrubs, trees, vines, and flowers, rich with birdlife, squirrels, and the occasional hunting housecat (necessary so that the creek can live up to its name, after all.)

The path is easy to find and easy to follow, with plenty of access points, not just at the numerous parks along the way but in commercial and residential areas as well. Even the frequent proximity of a freeway for about one-third of its length was not bothersome, as the trees masked much of the sound. The path is not only a delight to the soul and the senses, but serves as a genuinely useful transportation corridor. Unlike the riverside paths in LA, it almost never dips down to stream level, which would make it useless on a rainy day.

And it was a rainy day. We rode through drizzle, rain, cold, and wind that day, but with fenders on the bikes and rain gear in the bags had no inconvenience from the weather. The weather changed every ten minutes or so, so for the heaviest showers we just stopped under a tree till they passed, and rode on through light rain without resorting to our capes. The trail climbs to a reservoir at the very end, but as the path--at that point gravel--parallels a noisy highway, we instead turned westward to visit Saratoga, where we had been assured we'd find decent food.

That we did, though we also found the bicycle "infrastructure" insipid. Where San Jose has an extensive network of bike lanes that are clearly marked, well out of the door zone, and go to places one might actually go to, the bike lanes in Saratoga are a sloppy stripe painted about 16 inches to the left of a drainage channel, and filled with pebbles, pine cones, small branches, and other debris.

I'm no fan of bike lanes, but they do express a bicyclist's firmly-established right to the road, and give comfort to those who are not fully confident about riding in traffic.

San Jose's bike lanes are useful; Saratoga's are not. And San Jose is full of people bicycling, even during dreary wet weather. Even discounting that more bicyclists would be in town because of the North American Handmade Bicycle Show. We met plenty of locals who struck up conversations with us after noticing Vivian the Nickel-Plated Miyata, or my Bottecchia fixie.

In fact everyone we've met here has been supportive of bicycling, and were often bicyclists themselves, even though many had not heard of the show.