Not long ago, we received an email from Casey of Spokepunchers asking us to review their hats. We'd seen their ad in Fixed Gear Gallery and so were intrigued, but a little leery, as we of course make hats ourselves. But a quick look convinced us that their hats were different enough from ours--in design, intended us, and price point--that there was no conflict of interest. Indeed, it would be a sorry world that did not have room for more than one kind of hat! 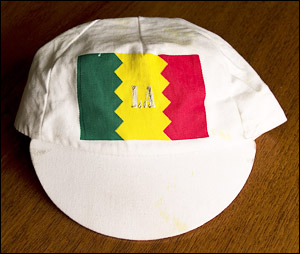 Spokepunchers' hats are made by Pace Sportswear, which has been making a variety of sporting cyclists' apparel for over thirty years. What makes Spokepunchers' offerings special are the designs that Casey applies to them. However, the hat is an essential element, it goes without saying, and so we are happy to report that the Pace hats that Spokepunchers chooses for its line are durable and comfortable.

We put about 100 miles on the white hat in the photo, using it both by itself and under a helmet, during which time it not only effectively kept the sun off our rather large proboscis, but also served to shield our spectacles during two days of rain. We also used it for walking trips around the neighborhood, for which it served well.

The bill is perhaps a little long for those who use an aggressive riding posture, but for riders who prefer riser, cruiser, or North-Road-style handlebars it is just plain perfect. The hats are cotton, so the temperature range is limited (and there was a bit of wicking of rain), but they feel good on the head and wash easily. (Since we were wearing white, and we are consummate slobs, the hat did need a bit of laundering after the first month or so; being purveyors of woolen clothing, we hand-washed it, and it came out sparkling and wrinkle-free.) 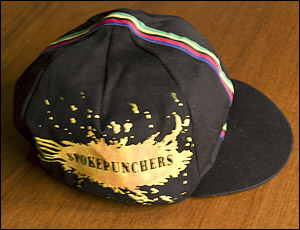 Casey had thoughtfully placed a Los-Angeles themed design onto the white hat, which led us to check their website to see more of their designs. We were pleased to see not only a vast diversity of graphics offered--some as one-offs--but also the promise to make you a custom hat, incorporating your own design, as well as your choice of hat base color and ribbon type, if desired. You can upload up to three images for your hat via the online form, and the price is genuinely modest: as of this writing, only $15 for the hat plus $3 for each image, with a dropdown menu to let you specify the placement of each image.

Pre-made hats are $15 to $18, with some designs occasionally on sale for even less.

They also make a woolen winter hat, which we did not test--too warm here in LA, plus we make wool hats ourselves, which would taint the review with a whiff of conflict of interest. It's a unique design, though, very clever. So click on over to the Spokepunchers website and load up with snazzy designs, Casey's, your own, or a mix; you won't go wrong!