It was a point of epiphany. We have all pondered why it is easier to climb a hill with a fixie (or single speed) than it is to climb the same hill on a multispeed with the same gear ratio. And we all know how much quieter a fixed/single drive train is compared to a multi-gear setup. But I wanted to know more. I wanted to know exactly why these observations were true. Now I know, and you will too. Read on.

After discovering the above benefits for myself, I decided to dig deeper into one of my favorite books, "Bicycles and Tricycles"

, written in the 1890's by Archibald Sharp. This book goes very deeply into the mechanical engineering of bicycle design, as it was practiced over 100 years ago when various designs and materials were being tried. Much of what Archie discusses has been discarded as being not worthy of further investigation, given the eventual adoption of only the best designs. But much remains true today, albeit without the detailed analysis that he presents. After all, we all know what works, why reinvent the wheel? 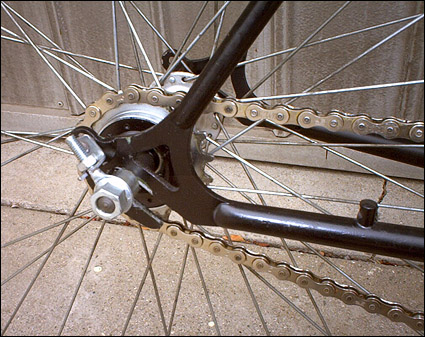 But reinvent the wheel I must. I had to know all the intricacies of why fixies/SSs are more efficient at using our feeble human pedalling efforts. What follows is the detailed engineering explanation, but without most of the boring physics, dynamics, geometry, and mathematic derivations of Archie's discussion. I will end with a "bottom line" and advice we can use with what we have to work with today.

In his discussion of drive trains, Archie notes that inefficiencies arise when a roller chain is used, rather than a belt, to connect two wheels. This is because a belt moves along a constant arc as it rounds the pulley whereas a chain is forced to follow a "pitch-polygon," which is not of a constant radius as a pulley is. Briefly, a pitch-polygon is the geometric shape created by drawing straight lines between the centers of roller chain pins when the chain is fully meshed into the chainwheel teeth. It is not a circle.

In a chain drive system, the relative proportional speeds of the driving wheel (the chain ring) and the driven wheel (the rear cog) are not constant. You might use the term "Herky Jerky" to describe this. This is the key to the problem. Small variations in these relative speeds lead to big inefficiencies in the drive system. Small wheels (cogs) exacerbate this situation significantly.

Now we turn our gaze to the rear derailleur (RD). An engineering nightmare. Here we not only have small cogs, we have two sharp reversals of the chain, added chain length, added friction (jockey bearings), and inertial losses (more on that later). So why do we have the RD anyway?

Well, those clever Frenchmen wanted to climb hills and race down the descents as fast as possible. So they figured they needed more than one gear ratio. Those complicated and inefficient hub gears just wouldn't do, so they figured it best to force the chain to fly off one cog and onto another. But this required a mechanism to maintain chain tension (more or less) and keep alignment by guiding the chain sideways. Rube Goldberg could not have done it better. What we ended up with was the modern rear derailleur. I won't even discuss the front derailleur, I quit using those years ago.

So the hot setup today--for the Spandex racing set--is about 33 possible ratios selected by complicated, over-sensitive, and inefficient mechanisms which would have Archie rolling his eyes and reaching for his slide rule to provide reasons for scrapping this whole system.

...Back to the issue at hand. Because chains must follow the pitch-polygon, the speeds of the two wheels (ring and cog) cannot be constant. Big problem. The speeds change (and change back) every time a chain link first meshes with a chainring tooth. The smaller the cog size, the more this non-linearity occurs. The speed variation is not much, but enough to set up vibration, noise, inertial losses, and the big one: energy Loss.

Yes, gang, a great deal of a bike rider's precious energy goes down the tubes thanks to these losses. Riding single-speed free mitigates some of these losses, as the freewheel mechanism will absorb some of the non-linearity of the drivetrain induced as described above. The problem is worse, of course, with a gearie set up. Not only are the small cogs much too small, but the jockey wheels multiply the effect and the whole RD contributes even more to the inertial losses as it vibrates. OK, so we have eliminated a lot of lost energy by eliminating the derailleurs, what else can we do? Eliminate those small cogs is what we can do. Want maximum efficiency? Use the largest rings and cogs that you can. If you can fit a 52 tooth ring and a 20 tooth cog, all the better. A larger ring and cog will also allow your chain to run with less pulling force, yielding less stress and wear.

And don't run your chain too tight. Yeah, I know, those track stands and tricks are better with a tight chain, but a bit of slop will allow some of the non-linearity to dissipate in the chain and not be transmitted to the crank/pedal system. A half-inch total up and down movement at the center of the chain is about right.

If your intellectual curiosity is stimulated by all this technomaniacal ranting, pick up Archie's book and be prepared for some eye-opening revelations. For instance, did you know that a cup and cone bearing system under load will impart a tension to the axle? Which of course is subject to a compression imparted by a quick release. So which force prevails? Reach for that slide rule and check it out.