I live in the Miracle Mile district of Los Angeles, near the County Museum of Art, so I headed up 6th St. through Koreatown and all the stacked and crowded two-story streetfront shops housing dentists, acupuncturists, florist, tofu houses, herb clinics, and so forth, up and down the rolling hills leading to downtown. A little east of Vermont Ave. the ethnic mix switches to Central American, and the streetscape now incorporates tiny storefront churches, pupuserias, small-time lawyers, and residential hotels--but the rolling hills continue apace.

I pass by MacArthur Park with its picnicking families and its notorious sellers of false IDs, its pushcart vendors, its balloons and laughing kids, crest a few more rolling hills, and finally come to the Harbor Freeway, the western border of downtown, where a steeply-descending S-curve requires me to use the fixie's front brake for the first time that morning. 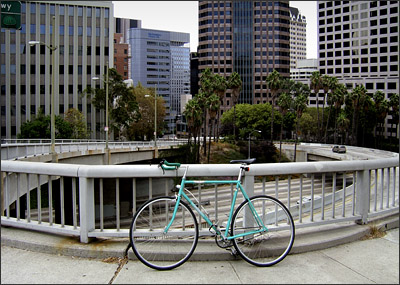 Downtown is tall buildings shadowing the busy streets, newer glass towers alternating with ornate Art-Deco hotels and lofts and who knows what--the LA Cultural Affairs department has a stunning office in a marble and mahogany building with an ornate grill gracing the entire frontage. Left on Broadway takes me through a cacophony of Mexican and Salvadoran loudspeakers and families cruising the hundreds of tiny, glittering shops selling jewelry, fancy dresses, boom boxes, cell phones, TVs, and damn near everything else. I dodge the buses and trucks and cop cars and pushcarts and shopping carts and crest another hill by the courthouse district, and finally roll down into Chinatown.

Chinatowns the world over manage to be both dingy and bright, lively and grim, smog-fouled storefronts bearing vivid red and gold neon and plastic signs, stern-faced Chinese scurrying purposefully in drab clothes, always busy, usually serious. I pulled into a little alley by the Phoenix Bakery (whose cakes are unsurpassable) and found the little hole-in-the-wall dim sum shop, nearly invisible behind a row of dusty SUVs. I picked up some goodies to bring home to the wife, threw them in the messenger bag, and squirreled back out onto Broadway, headed for the bridge over the LA River. 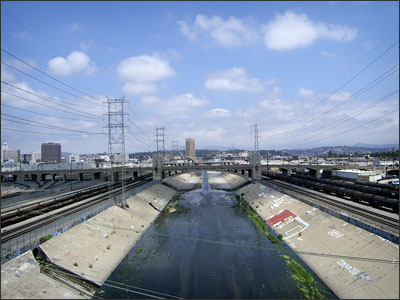 You can see the Los Angeles River as pathetic or as terrifying, for it usually bears almost no water and is almost entirely encased in concrete. To me, it's a monumental sculpture, and while I agree with the community's plans to green the river, I'll miss its sculptural aspects if we are ever fortunate enough to succeed. For now, it is a study in minimalism: from downtown to the sea it ranges between 20 and 100 meters wide and about ten meters deep, pale white concrete unadorned except for graffiti, strutting pigeons, and a narrow deeper channel in the center where the water stays most of the year. (In winter storms it can fill to the banks in a few minutes.) Tributary channels swoop in from the side, streamlined into the main channel, and lesser drains open up as simple holes in the hard walls, or hide behind heavy iron sluice gates which open from the relentless pressure of stormwater when the skies rage in January. On either side run busy railroad tracks, and a long file of steel power pylons and the catenaries of high-tension lines mark the path of the river in the sky long after you can no longer see its banks in the distance. Between the tracks and the river, dust and weeds; beyond the tracks, rusty corrugated walls of factories, warehouse, and junkyards. And the bridges: the justly-famous bridges of downtown, built mostly in the 1930s, elegant leaping arches decorated with elaborate lampposts and guardrails, concrete made into civic poetry in a era that was learning to love itself again after the Depression.

Looking downriver from the Broadway Street bridge, I decided (at last) on my route for the day: I would ride all of the downtown bridges, from Broadway to Olympic Boulevard, zigzagging back and forth across the great gray gulf like a line of stitching.

The river wasted no time giving me a workout: no sooner was I over the Broadway bridge than I turned back nearly 180 degrees and crossed the river again on the Spring Street span, looking to my right to see the bridge I had crossed just a minute before. Once back on the west bank, I turned between a row of cinderblock warehouses to north Main Street and crossed, again almost immediately, on a level bridge leading to, of all things, an active winery and one of the first artist's loft developments in LA...sharing the neighborhood with a concrete plant, a notoriously deadly housing project, and a sprawl of blank-faced warehouses abutting the multimodal yard where cargo comes off trains and onto trucks, and off trucks and onto trains. A dip under the freeway, another brief climb, a turn to the right, and I'm off in search of the next bridge.

Now, the east bank of the river is a bluff, considerably higher than the west bank, so after climbing the arch of the bridge and easing down the descent to the east bank, I would face another climb almost immediately--and in the manner of LA streets, the roadway just goes straight up the face of the bluff, without angling to ameliorate the steepness in any way. But my trusty Fuji fixie magically allowed me to scale the walls with only a bit of grunting and standing on the pedals. So up and down I went, over the bridges then up the bank--and of course the blufftop road often dipped up and down as well, swerving by parks and ponds, cruising through clapboard neighborhoods, winding between the looming, shabby walls of the warehouse district. I saw plenty of stunning buildings: old brick sheds built in the days when even warehouses merited a few curlicues along the roofline and a hand-painted sign, or concrete structures built when the material was novel and architects loved to play with its plasticity.

One long bridge left the bluff at its height and traversed not only the river itself but a railyard and about two square miles of warehouses, passing them all well above roof level; in the distance blue mountains slouched under puffy drifting clouds. And always the river, broad and white and dirty and empty and grand, with train tracks and powerlines wound around it like demented jewelry, and the little squirmy specks that were my fellow humans inching tediously within or along it on this sunny Sunday noon.

Finally I got to Oympic Boulevard by the gigantic ancient Sears building (one of the few left, I hear), and headed west towards home. Olympic cuts through the festive clutter of the garment district and by Santee Alley, where hundreds of open-front shops line the streets and the alley itself (which really is just an alley, for pedestrians only), and the odors of roasted corn and fresh-made salsas fill the air. Zipping wearily out of downtown, passing the Staples Center and then under the Harbor Freeway once again, I was soon back in Koreatown, then the residential flats of Wilshire West, then La Brea Avenue and home.

Hot, sweaty, exhausted, and happy. Not many miles--maybe thirty?--but lots of hillclimb sprints, too much to see, too much to remember to go back to. A grand day, a grand ride indeed.