Cycling in Portland: Both More and Less than Paradise
by Richard Risemberg (May 2010)

In April 2010, Gina and I rode to Union Station, packed our bikes into Amtrak boxes, and climbed on the Coast Starlight for a long-awaited trip to Portland. Although Gina had been there recently (riding a Brompton borrowed from our Portland retailer, Clever Cycles), this time we were both going, with our own bikes, and with a mission to see whether Portland really lives up to its reputation as the US Bicycle Paradise, for which reputation it has been both mocked and praised.

Thanks to a "new agreement" with the Union Pacific, whose right-of-way Amtrak leases for this route, the Starlight arrived on time, or even early, at every station! So, a little after three in the afternoon the next day, after a convivial passage through some of the most beautiful country in the world (a passage made much more enjoyable by our indulgence in a roomette for sleeping), we arrived at Portland's elegant red-brick Union Station, detrained, and unboxed our bikes.

When you live in a place for a very long time, you calibrate yourself to its characteristics. I have lived in Los angeles for over fifty years, and Los Angeles is a wide, wide city, covering 469 square miles. In fact, since the city itself is a small part of the Greater Los Angeles Area, it is really much bigger than that. My typical weekly riding ranges from Play del Rey in the southwest to South Pasadena in the northeast, a distance of thirty miles, and a 38-mile round trip bike ride for coffee with a friend is not unusual...for me.

So my first impression of Portland was of its relative smallness. We rode from the train station to our hotel in fifteen minutes, though I'd expected a long slog after looking at the online map. (I had not looked at the scale chart, I must admit.) The next morning, when I rode across the Willamette River to explore a bit, I found myself reaching my landmarks in about half the time I had expected to.

You might be more accurate in saying that Portland is compact, rather than small. Though it does not spread far and wide--fortunately, and not by accident either, having had its Urban Growth Boundary for many years now--it is fairly well built-up, with small but unutterably charming houses and small apartments in the eastern half, and tasteful high-rise commercial and residential buildings downtown, interspersed with fine old brick edifices housing the famous coffeehouses and restaurants. Both riding and walking through it were sensually enrichening experiences. Though it has one-sixth the population of Greater Los Angeles, and the city itself is one-third the size of LA, it has very few of the long stretches of bleakness that characterize so much of Shakeytown.

My second impression was that it is indeed a city where bicycling is accepted perhaps more than in any other in the US. In downtown and SE, at least--which is where we spent most of our time--bicycles are everywhere, parked in front of shops, stores, residential buildings, and restaurants, and being ridden everywhere, at all hours of the day and night.

Two of my personal favorites among indicators of accepted utility cycling: 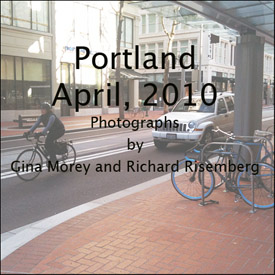 Click on the image to see our slideshow in a popup window
I'm not generally a fan of bike lanes, but the way they have often been done in Portland is quite intelligent. While many streets, especially outside downtown, have the usual striped bike ghetto in the door zone, throughout much of downtown itself the bike lanes are very wide, set off with broad double stripes, well out of the door zone, and take the place of a car lane. In other words, a road diet: discouraging thoughtless car driving, and encouraging the use of bikes. Since cars wear roads out and bikes don't, and since cars take up so much space whether moving or parked, space that must be paid for, space which does not give back in property taxes, it makes sense to allocate them less road space, and reallocate some to cyclists. After all, in downtowns, where distances are shorter anyway and space is at a premium, you can get a higher throughput of people by encouraging them to use bicycles instead of cars, thereby creating more commercial churn at lower public cost--a win/win situation, especially when you add in the health and sociability benefits of getting folks onto "active transportation" for their commutes and shopping trips.

But much more important than this is that Portland has gone all-out--at least in much of the city--to provide abundant bicycle parking. There are racks of every description on the sidewalks all over downtown, and on the busier streets in the residential zones--and in neighborhoods that see intense bicycle traffic, there are bike corrals. One or two car parking spaces have been converted to parking for twelve to twenty-four bicycles in twenty locations around town, with sixteen more planned. Since motorists, like cyclists, generally travel alone, this means accommodating more than ten times as many visitors (merchants, read "customers" there) than serving only cars can do.

My third impression was that it was much drier than I'd expected for April. In fact, we never once used the rain gear we'd lugged 1100 miles from LA--not the bike capes, not the brollies. It did rain once while we were there, but for only twenty minutes, and it occurred while we were at a meeting, and stopped before we left.

At first I thought it was an anomalous week, but locals kept mentioning how much it had rained the two weeks before, as though it had been an untoward experience. So I looked up Portland's average rainfall, and found it to be 37 inches yearly, with rain on 154 days out of the year.

This is pretty close to what you'd get in Pittsburgh, Cleveland, St. Louis, or Washington DC--though the latter two concentrate the rain into fewer days, meaning harder rain. Portland's wettest months--November through February--average 5 inches of precipitation (occasionally in the form of light snow, which comes on average twice a year), with rain falling on 18 days out of 30. Wet, but no monsoon. Summers can be quite dry and very hot. Not bad at all. NYC, Houston, and Tampa all get far more rain, though again on fewer days.

Still, since it's often raining, however lightly, it makes sense that most bikes, even sporty ones, wear fenders; most bikes also have lights, and many carry panniers. Not many, however, carry the massive locks we are used to in LA. Bike theft must be less prevalent there, as we saw fairly pricey bikes "secured" with what would be no more efficacious than string down here in the City of (Fallen) Angels!

Bike route signage is wonderful and makes getting around town pretty nearly intuitive even for folks who just got off the train the day before. Signs are posted at bicycle route junctions and name not only destination and direction, but distance in both miles and estimated minutes to the named destinations. On the last day, Gina and I hooked up with a crew of friendly folk from the iBOB list for a little 55-mile spin showing off some of the long-distance bikepaths, the rivers, and the beer. Towards the very end of the ride, we got separated from our guides; though we were in a part of town where neither of us had ever been before, we found our way back to downtown and the hotel easily and without the slightest trepidation. This was in North Portland, parts of which are no more bike-friendly than most other US cities, and in fact resemble the industrial flats of LA's Pacoima, with truck yards, tilt-up warehouses, bleak shopping malls with vast half-filled parking lots, and numerous freeway overpasses. But the bike routes, and more important, the clever little signs, were still there, and guided us to home base despite the loss of our companions, who had stopped for two flat tires just after we'd pulled out of hollerin' range.

That Sunday ride was in many ways a highlight of a trip that was mostly highlights. Our friends comprised Thom Batty and wife Shelley (who planned the route), fellow cyclo-couturier Harth Huffman, and a heap of other fine folk, including a Brompton-mounted British tourist who'd been sent our way by a local bike shop that heard about "a bunch of guys who like to ride old bikes" on the internet. We met at Stumptown, the iconic Portland coffeehouse, crossed a bridge to the esplanade on the east bank of the Willamette, and soon found ourselves on the Springwater Corridor, a rail-trail cutting through idyllic forests and meadows as it followed a small brook to the southeast. Most pleasing to me was the place where our trail crossed another similar "bicycle highway" far out beyond the edge of town--one that paralleled a light rail line! Truly a relaxing change from the thundering traffic of LA....

We got back on the streets at Gresham and rolled through semi-rural country to Edgefield, where there's a large McMenamins complex that at first seems a bit tourist-trappy--pointedly rustic buildings and all--but which served up serious and satisfying cuisine and excellent beer--which, like the wine and whisky, was brewed on premises.

From there we headed north to the Columbia River, where we found another bike path that, with only modest interruptions, took us past the airport and into North Portland, where we then promptly lost our pals.

Although this was dismaying it was not distressing, as the well-signed routes made it easy for us to get back to downtown and even to choose a new, as-yet-unridden-by-us bridge for the river crossing.

Nevertheless, Portland is not entirely the bike paradise of its own myth. Head west from downtown, and bicycle infrastructure diminishes considerably, with fewer racks and riders alike, and much less street life. And there are still freeways gashing the fabric of the city, dividing or in some cases bisecting neighborhoods, and looming over some of the otherwise most charming parts of the riverbanks. The noise, the smell, and the visual and social bleakness of hyperthyroid expressway overdevelopment is less in Portland than in most other US cities, but it is not nonexistent. Though Portland is one of the few US cities that has actually demolished a freeway (a trend we fervently hope accelerates!), it is not by any means devoid of those temples to arrogance and hurry. Some of North Portland, as I mentioned earlier, resembles some of the bleaker parts of LA. Fortunately, freeways are mostly out of the way...though I suppose it would be more accurate to say that they seem out of the way because a vivid civic life is not possible in the realm of the motorcar, so you don't go to them except to go somewhere else. Who wants to hang out by an offramp, after all?

Portland gives you plenty of transportation choices, not only bicycling but also a good bus system, and not one but two light-rail networks. Both the downtown streetcars and the Tri-Met's MAX trains are handsome, smooth, quiet, and follow intelligent routes, and parts of the system run all night. The drivers are even polite--when Gina and I were mistakenly riding in a bus-only lane, the operator of a bus behind us gave a little tap of the horn and then very nicely informed us of the lane restriction. And one result of all this "alternative" transport is that streets are calmer and less congested for those who do drive.

So there you have it: Portland, a town that is not perfect but that is willing to better itself, and has; and a town where riding a bicycle simply to get somewhere is an unspectacular everyday act.

Most other cities in the US could do worse than to copy it. After all, what's wrong with a town where being happy, clean, and convivial is considered not impossible, but normal?