The Pedicab Chronicles 2: Dazed and Confused
by Bob Fried (May 2012)

Bob Fried is a pedicab driver for Twin Town Pedicabs in Minneapolis. This is part of an irregular series. 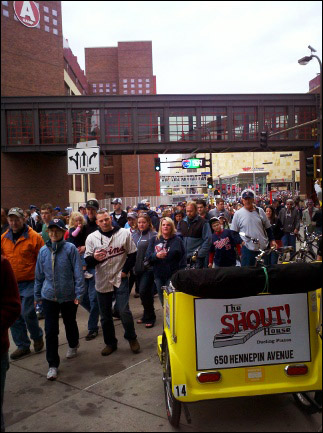 Last June, during my first couple of weeks driving a pedicab, I was servicing a nighttime Twins game at Target Field in Minneapolis. When the games end, there are suddenly tens of thousands of people exiting at once. Most of those filter across one particular intersection at 7th Street and 2nd Avenue North. As they cross the intersection, there is a line of pedicabs waiting pretty much in their path as they walk towards downtown. I was in that line.

A couple of obviously drunken "gentlemen" approached me and asked me to take them to the nearest "gentleman's club." I asked, "You mean strip club?" "Yeah, take us to the nearest strip club. It's his birthday and he needs to go to a strip club." Being new to this, I had no idea where the local strip clubs were. I had been memorizing the locations of various hotels, restaurants, clubs, and bars, but strip clubs were not on my list. If I had properly devoted my attention to strip clubs, I would have known that the Seville was merely a block away. I would also have known that these guys were too blatantly drunk to get admitted.

I confessed to my ignorance, and the two "gentlemen" left with the crowd. Not wanting to give up yet, I asked one of the other drivers where one club was that I knew the name of, Deja Vu. He told me, and, armed with something solid, I chased down the prospective customers and told them I could take them to a strip club.

Then they said that they needed to go to an ATM machine first so they could pay me. I told them I could accommodate them, and headed to a bank on Nicollet Mall that I knew had a machine in its vestibule.

As I pedaled down the street, I could hear one of my charges yelling over the continued din of the crowd: "ATM, Bob, A...T...M.!" They then began chanting in unison, "ATM, ATM, ATM...."

Then came a variation on the theme:"Bob, do you have a cigarette?" Since I don't smoke, I didn't, and as we got closer to Nicollet Mall they repeatedly asked me to pull over so they could ask handy groups of people for cigarettes and a light. From the looks on some of the faces, I'm guessing my passengers also propositioned some of the girls in those groups. All the while the chant continued--"ATM, ATM, ATM...." In between cellphone calls, propositions, and puffs. At one point, on Nicollet Mall, they invited a third person into the cab. They all seemed to know each other, and a conversation ensued, much to my relief. Soon, however, there were three chanting, "ATM, ATM, ATM...."

I stopped at the bank and found that the doors to the vestibule were locked, so I broadcast a radio request for an ATM location on Nicollet Mall and got directions to a bar called Barrio. Naturally, it turned out that Barrio no longer had an ATM.

"Bob, find us an ATM so we can get some cash, go to a strip club ,and get my friend here some pussy." In desperation, I parked the cab with my three passengers in a place I could watch and asked at the Dakota Bar and Grill whether there was an ATM nearby. It was right at hand: just go out the door, up the escalator, across the skyway, right, and down the hall.

When I reported this to my passengers, it became clear that they were far too drunk to follow the directions. So, I took the guy with the card with me...up the escalator, across the skyway, right, and down the hall--constantly checking on my cab through the windows above. I planted my passenger in front of the machine, pointed and said "A...T...M."

The machine was cooperative in spite of being overpowered by alcohol fumes, and I was handed some cash. Then my ward looked at me and said, "Bob, I have to pee. Bathroom, Bob. Now."

I could see by his face that he was approaching a moment of crisis. I quickly scanned the hallway, saw no restroom signs and asked someone nearby if they knew where the nearest bathrooms were. With the provided directions I told my passenger to follow me: farther down the hall, down the escalator, into Target, and past the cash registers to, at last, the bathrooms.

With that taken care of, I was anxious to get back to a window where I could check up on my cab, so I moved somewhat ahead, still keeping my inebriated companion in sight. Retracing our route back past the registers, through the doorways, up the escalators, down the hallways, and across the skyways was a bit of a challenge, so I stopped for a moment to get my bearings.

By this time I was glad I hadn't sent them into the maze unguided. I may never have seen them again--which might not have been too bad--but then my fare would never have materialized. My passenger staggered forward, catching up to me, and asked, "Bob, do you think that my friend is OK in your cab with that drug dealer?"

At this point, one of the remaining deficits from my old head injury was that too much information, especially emotionally-charged information, tended to make my brain want to shut down. I tried to remain calm, and, managing to keep my brain awake, mentally reconstructed our path back. I then replied as calmly as I could, "I think so. I've been keeping tabs on the cab through the windows. Why don't you call your friend to be sure?"

He did that. Everything was OK, and his friend requested that he get even more cash from the machine. So--feeling a bit like a rather overworked lab rat as we once again followed the maze of hallways, skyways, and escalators--we went back to the ATM.

When we finally got back to the cab, the group's banker paid the drug dealer, and the latter slipped into the gathering dusk. My original passengers gave me some more cash and they departed too, no longer wanting to go to a strip club. Apparently, they had gotten what they really wanted, and the birthday boy would have to be satisfied with dreams instead of action.

I don't think my cab had ever been so heavily "loaded" before....