I rode without retention for the first fifteen years of my time on the bike, but once I decided to try toe clips I realized that riding was significantly more comfortable, less tiring, and safer than without them. LA is a big town, and one often has to ride far at moderately high speeds. A bit of retention saves some energy, and not having constantly to reposition your foot makes for one less fuss while on the road. And of course, a foot slipping off a pedal in LA's rush-hour traffic could prove, let us say, problematical, right? 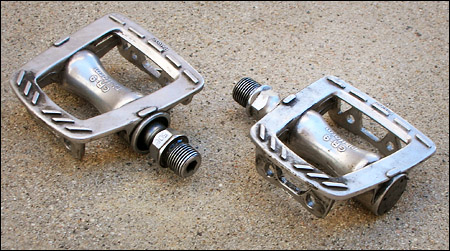 Then again, I don't race; I don't need full-on clipless, nor do I want to be trapped into wearing only cycling shoes, especially since I often walk quite bit when I get where I'm going, and usually need to look at least semi-presentable. In fact, I don't even snug up the toe straps all the way: the straps and cages simply snuggle my foot onto the pedal, but don't impede my pulling out in case I should need to dab or bail.

Of all the pedals I've tried in my tens of thousands of miles of urban riding and occasional tours, the MKS GR-9s are my hands-down favorites. Despite a couple of notable problems in design, I like them well enough I hope that MKS never discontinues them, for they have two overriding virtues:

Now let's get on to the problems: 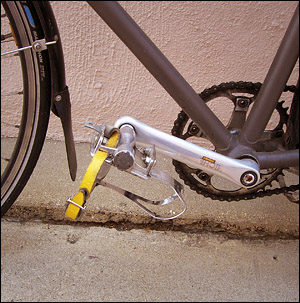 As regards the last problem, most fellow GR-9 aficionados I know just ignore it, since you can flip them just fine without it. Unless, of course, you're as clumsy as I am. So I just put a little angle bracket on the broken pedal--there's already a handy screw hole--and that has been working perfectly for fifteen thousand miles or so.

They are rebuildable. Most pedals ship from the factory with too-tight bearings and too little grease. No one seems to know why this is so, but it's almost universal. (At least for cheap pedals, such as these.) You can certainly ride them straight out of the box--I have--but being mechanically inclined and kind of a fussy sort, I open mine up when I get them, pack them full of grease, and carefully adjust the bearing preload till they're satisfyingly smooth.

Once that's done, they seem to stay in trim for years on end. My current pair has been on the Bottecchia for close on to twenty thousand miles. I've used them with single and double toe straps, and all variety of cages, though I like MKS cages best so far. I've also got them on my backup bike, and on Gina's randonneuse. They grace my son's bikes as well. Several of my friends use them too, and so do many of LA's ever-more-numerous fixie punx.

Basically, pretty much anyone who rides in non-bike shoes will love these. Though they don't limit you to street shoes: I wear my Look MTB shoes with them too, and the system works fine. Even dress shoes aren't too bad in 'em!

They seem to be available everywhere, and they're only about thirty bucks. (Though if you want the black ones, be ready to pay much more.)

All in all, one of the unsung heroes of the bicycle industry: a good, cheap product that works well and lasts long, with just a couple of minor quirks.