It's nine feet long, more or less, and weighs something in the realm of seventy-five pounds (or around thirty-four kilograms), so you'd think that "Gazelle" might not be so appropriate a name for this extravagant cargo bicycle. But the fact is that in its deliberate way, it is quite a graceful, gliding bike, rolling with majestic insouciance over speed bumps, ruts, and one particular intersection that was torn up for resurfacing weeks ago and has since languished as backers of various competing neighborhood codes battle over the eternal (for LA) question of "asphalt versus concrete." 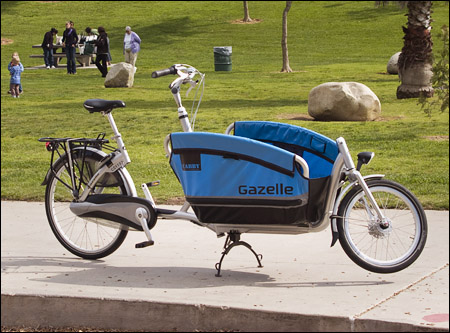 The Cabby faced this intersection numerous times and simply lolled across it on its 2+ inch tires, even when loaded with boxes of books, shoes, and knickknacks--or even a stack of glass-framed photos, up to 30x40 inches, at one point! Or, for that matter, when carrying wife Gina.

Fast it's not, never. One could call the Cabby a flat-bed truck for a bicycle, except that it's too elegant and versatile for that; it's made for carrying weight and bulk, lots of it, and comfortably, and that it does--within the limits imposed by its bolt-upright seating position and extremely short virtual top tube. Demanding terrain, strong winds, or simply too many miles will leave its master exhausted. But within a radius of three or four miles, as long as there are no steep hills, the Cabby will do things no other bicycle can dream of. If you need to carry people--children or grown-ups--or lots of large heavy objects, the Cabby bakfiets is your best two-wheeled friend.

So what is a "bakfiets" anyway?

Hanging out in the box was pretty fun. The seat, built for kids, held me up easily, was comfortable though a little small for my 5'7" frame, and my tailbone hurt a little after a couple of miles. The box itself provided plenty of room for me, my purse, a small day pack, a sweater, and probably a blanket. Things can be tucked away under the seat.

The ride was smooth and comfortable with little bouncing and no jarring. If you know the streets in our neighborhood, then you will recognize this as quite a feat. Were I a parcel, I'd be safer riding to my destination in a Gazelle than in the back of a tight-sprung delivery truck.

It's simply a very clever variation on the cargo bike. Rather than putting racks out front and rear and trying to balance the load on them, a bakfiets stretches the wheelbase of the bicycle and puts a load-carrying platform in the middle, between pilot and front wheel, where it will have the least effect on handling. This means that not only can bakfietsen carry hundreds of pounds without trying to torque you out of the saddle at every turn, but they can also carry physically larger loads, up to the size of a small washing machine. Even a longtail requires that the load be divided between the two sides of the cargo area, or carried up high on the rack where it will degrade handling. And of course with the load in front, the pilot can keep an eye on things, be they children, groceries, toolboxes, small trees, or gold bars.

Most bakfietsen come with a stylish wooden box for the cargo. The Cabby instead uses a cloth and aluminum box that is much less stylish--but is also much lighter. And, when it came time to park the nine-foot-long beast of burden in my tiny garage, the box folded up compactly--meaning one less bike portaged upstairs to the apartment to make room. I had loads of books, glass-framed large-format photos, a wife, and so forth in it, and the box displayed no bad behavior whatsoever. With the more contemporary styling of the Cabby--it is swoopy rather than omafiets quaint--the folding box did not jar aesthetically either. The stated capacity of the box is around 135 pounds (75 kilograms); I had more than that in it a couple of times. 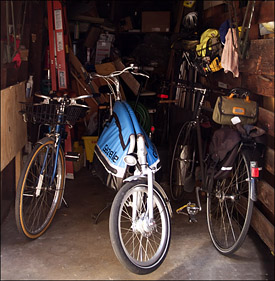 As the Cabby is apparently marketed primarily to families with small children, it came equipped with a bench seat and wee little seatbelts. Since the kid is now 24 and studying law (when not riding his fixie through the midnight darkness), I stuffed Gina in there instead; her evaluation of the passenger's experience is in the sidebar. And since the seat is easily removable, I used the Cabby mostly as a cargo, not a passenger, bike.

There is a rain cover available for the box, but we did not receive one to try out. There are fenders, of course, and they worked fine over several deep puddles we went through.

There is a standard (large, majestic Dutch standard) rear rack as well, which will accept a child seat (in case you are particularly philoprogenitive), or smaller parcels, and probably Dutch-style panniers as well, though I did not try any on it.

The wide two-legged prop stand holds the bike solidly no matter what the load in the box, yet is easy to push off of when you need to get going. 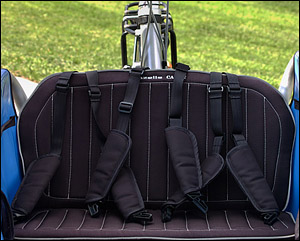 The seven speeds in the transmission are well chosen, with first gear low enough for the short, steep hills on the road from Mom's house even with a considerable load (I used the Cabby to haul the detritus of a massive spring cleaning either back to my place or to the Goodwill drop). High gear--which I used only once in the three or four weeks I had the Cabby--will get you going about as fast as you want to move on such a beast, and the in-between gears are well spaced. The Shimano Nexus internal hub shifted excellently and required no habituation, though I hadn't used a hub gear since my adolescence over forty years ago. (Please note that the Nexus series is not designed for extreme high-mileage use.)

The roller brakes, also Shimano, worked better than the drum brakes I've tried on other Dutch-style bikes, and the "cooling disks" may actually help keep them cool; they certainly make them look "cool." The front hub has a dynamo built into which generates power for the headlight.

Said headlight, unfortunately, seemed in dire need of Viagra, as it tended to droop downward and put a bright trapezoid of light immediately ahead of the 20-inch front wheel; I did not take the liberty of popping off the mount covers to tighten it. In any case, the dynamo will drive any modern generator lamp, from the $20 B&M 2.4W halogen to the mighty (and mighty expensive) Schmidt eDeluxe, so if you do end up using the Cabby on unlit roads at night, you can easily upgrade.

The rear lamp is battery powered, but you could run a wire back there and replace it with a generator taillight if you wanted too. It's a bright enough lamp as it is, though.

The Cabby also comes equipped with a full chaincase, meaning that not only do your pants stay clean, but chain lubrication becomes a once-a-year chore. I wore full-length floppy pants every time I rode the thing, and never once had a problem. 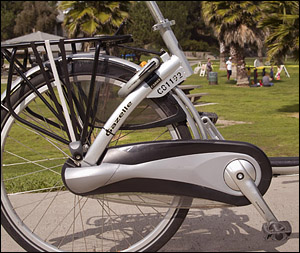 Now, what with that full chaincase, an internal hub gear, hub brakes, and a nine-foot wheelbase, the prospect of fixing a flat becomes rather daunting! Fortunately, though the test bike came with Vredenstein tires, the market version wears wonderfully flat-resistant Schwalbe models (my own present favorite rubber). Despite riding on very rough and often glass-strewn roads, I had no trouble with the Vredensteins either. (Wheels are 20" front and 26" rear.)

The stem and seatpost are both easily adjustable, so one Cabby can serve all the riders in a household; the seat is typically cushy (and a bit too wide for my taste, but that would be simple to fix), the pedals comfortable, and the clever twist-grip bell an absolute delight!

There is also an integrated rear-wheel lock that would not work on a bike you can pick up and carry, but which is effective on the Cabby.

As I mentioned before, with its bolt-upright seating this is decidedly not a long-distance hauler. But it's easy to hold up at a stop, easy to get rolling even on an uphill, and easy to steer with or without a load. You can quite comfortably chat with your passengers, and watch your cargo without neglecting the road. Within a small but still significant area--say a three-mile radius, or about 20 square miles--it will carry things that no other type of bike, nor many cars, can manage.

And you will get nothing but smiles and friendly comments from everyone who sees it, from Harley riders to truck drivers to socialites in their Mercedeses. At least that was the case here, even in "car crazy" LA!

The test model was loaned to us by Aika Trading. For information about Gazelle bicycles in other countries, see gazelle.eu.

To see more photos of the test bike, go to our Flickr page.