While at Flying Pigeon LA, well, I sing I'm Dreaming of a Green Friday…and (of course; you know me) go into details.

For Black Friday, you crawl into your car and struggle through traffic jams to a mall. There, after inching your way through a swarm of nervous metal to a parking slot, you bully through angry crowds to buy cheap crap at corporate stores. Next, the stores funnel most of your money off to parasitic shareholders, usually far from your community. Those then sit on your money.

But for Green Friday, you hop on your bicycle and pedal to a nearby shopping street. You lock it up and stroll among your neighbors to peruse the offerings of local shops who have learned over the years that not everybody wants exactly the same things nationwide. Many of them offer carefully-crafted products made in small quantities, which means that corporate stores, who depend on volume, which requires a standardization of tastes, will never touch them. The money you spend there stays almost entirely within your local economy, as the people whose customer you are will be your neighbors. You have jammed no traffic, fouled no lungs, and frayed no nerves—yours, or anybody else's.

Even many suburbs, especially if they are old streetcar suburbs, have such neighborhood shopping streets.

Bicycle Fixation lives in Los Angeles, the original Ground Zero of Carmageddon, a place once famously characterized as "Seventy Suburbs in Search of a City." Yet even here we have many charming, happy little shopping streets that are easy to pedal to from two or three miles around. We've made a list—far from inclusive—for our fellow Angelenos…and we suggest that you do the same for your own town. Let people know that they don't have to join the destructive frenzy of "Black Friday," and that there's a greener way to shop for winter gifts just a few pedal strokes away....

Here's our list for LA (covering the area south of Mulholland only):

Larchmont Village
A few blocks west of Western Avenue, between Beverly and First. All kinds of boutiques and eateries, including a very good bookstore, a hat store, and an excellent wine shop.
Bike-friendly features: a fair number of sidewalk bike racks.

Abbot Kinney in Venice
Shops and galleries ranging from countercultural to hoity-toity, and lots of places to eat, all local and individual.
Bike-friendly features: sharrows, lots of racks, close to Venice Boulevard and Mian Street bike lanes. Swarms with bikes most days.

Leimert Park Village
"The Leimert Park Village, bounded by Crenshaw Boulevard, 43rd Street, Leimert Boulevard and Vernon Avenue, is a pedestrian-oriented shopping core offering goods and services with an Afro-centric theme. A haven for artists, poets and musicians, the Leimert Park Village stands as a tribute to the success of businesses owned and operated by African Americans."
Bike-Friendly features: sidewalk bike racks.

South Beverly Drive in Beverly Hills
Lots of boutiques and a couple of jewelry shops. A number of good places to eat. This is the "normal" shopping section of Beverly Hills; you won't need an offshore account to shop here.
Bike-friendly features: none; it's Beverly Hills.

…And don't worry about how to carry your purchases home. At least not if you have a basket, or a front rack (front racks can carry very large loads), a rear rack and panniers for smaller stuff, or just a large knapsack or messenger bag. If you don't have any of these things, then…make your first purchase a gift to yourself, and get some!

You don't need a cargo bike or a trailer to shop on two wheels. And if you do have to make a second trip…well, any excuse for a ride, I say!


Saturday, November 23rd
"Drizzle Batters LA"
I know it doesn't rain much in Los Angeles, but even in the driest years, it does rain sometimes, and always during the same months. You'd think the city's motorists might remember what it's like from one year to the next. But part of the appeal of cars is that they allow you to believe you can ignore the world outside the windshield.…

The car, after, is your private space.

However, dream though you may, O driver, the road is not your private playground—certainly not to all of us paying to subsidize motorists' cherished delusions while you shove us aside or just run us over.

Today was one of those days where the faintest sprinkle of rain engendered chaos. Three dead, numerous large trucks destroyed, a rail line blocked as the oblivioids slid all over the freeway, and the usual "record number of crashes" reported to the CHP.

On my pedal home from the Westside I caught a glimpse of the behavior that leads to such tragic absurdities as death by drizzle on the streets of LA. And it has nothing to do with water, which is a fairly common substance on this planet.

I was riding eastward in the bike lane on Venice Boulevard. Venice is six lanes wide at that point, far wider than it needs to be for the traffic it carries. And the bike lane has been there for forty years, enough time even for LA drivers to notice it.

But no sooner had I turned onto Venice in Culver City, than I came across this scene:

A late-model Benz was blocking the bike lane—quite illegally—and laying on that loud Mercedes horn, blasting repeatedly at the idling…ambulance(!)…that the inmate of the Benz felt was blocking his way.

The ambulance was not blocking the bike lane, but had left a large enough space for me to get past it. Once I had, I saw that said ambulance was pulled up immediately behind a row of parked cars.

In other words, the petulant Benz wasn't going to get through no matter what.

But as I pedaled onward, I could hear the Teutonic screech become ever more frenzied, as the driver, apparently around three years old, repeatedly tried to bully the ambulance through sheer sonic pressure.

Then, not two blocks later, I encountered a USPS mail truck, blocking the entirety of the bike lane…with nearly five feet of empty space between the truck's right side and the curb.

I turned off Venice a couple of blocks later and took a slower but far more peaceful route the rest of the way home. I didn't want to become any more discouraged over our species than I already was today. Which was an otherwise exhilarating day, with sweet air and swirling clouds exciting the senses while calming the soul.

Not that the poor folks stuck in their cars could feel any of it.

Wednesday, November 13th
Offsite Blogging CXLIII
On Orange 20's site this week, I revisit the evolving controversy over the Glendale/Hyperion bridge, in Torches and Pitchforks.

And at Flying Pigeon LA, I revisit road use and taxation, in You Pays Your Money, and You Takes Your Choice. 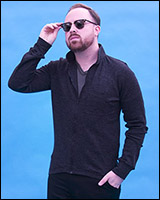 Here's our latest product, the New Urban Jersey, mixing equal measures of looks, functionality, and comfort with 100% merino wool to keep comfortable and socially-acceptable on and off the bike.

Cut a bit long in the back and sleeves in case you ride a sportier bike, but handsome on any bike you might ride, and almost anywhere you don't need a tie to enter.

Wear it alone if you want—there is no more comfortable material than this merino rib anywhere outside the realm of cashmere—or use it as an outer, mid, or base layer. A full-length zipper makes for easy adjustment to changing temperatures, and there are two pockets: one on the breast, one low on the back. The back pocket has a buttoned flap for security.

This is a remake of our famous hooded jersey but with a mandarin collar and a lower price. The hoodies were so well loved that people would even sleep in them, and one buyer said she wore hers all day every day for four hundred days in a row!

Wednesday, November 6th
Offsite Blogging CXLII
Two views of the LA's newest (and only third ever) bike corral in my outside blogging this week. On Orange 20, you hear about how This Is A Great Day, with little of my trademark complaining.

And on Flying Pigeon LA, you see how the design of that great day's corral has left LA's cyclists feeling Boxed in—a more critical view, shall we say....

Tuesday, November 5th
Bike Parking Done Right!
In Portland, Oregon, of course, where the city just installed its one-hundredth bike corral just nine years after initiating the program. Here's an inspiring and amusing short video showing what could happen in your own city if the powers-that-be could get out from behind their blinding clichés:

Bicycling supports local business, nurtures community values, and improves public health. Plus, instead of incurring a net tax loss, as cars do, it results in a positive ROI on public money invested in the simple infrastructure that is all it needs.

Portland's entire bike network—lanes, parking, paths, and all, installed over a space of twenty years—cost less than one mile of urban freeway.

Good as its street parking is for bicycles, Portland is still working on expanding bike parking in commercial, residential, and public buildings.