And at Flying Pigeon I answer some hater rants inspired by last week's post there, pointing out that bike lanes are Not Just for Cyclists when you look at the bigger picture.

And at Flying Pigeon LA I examine a study of the York Boulevard road diet, and compare it to similar doings in NYC, asking, Is That All There Is to a Bike Lane?

Women in Cycling: A Roundtable Discussion

Philadelphia, PA: The Philly Bike Expo is proud to present its second women's panel on October 27th. Bringing together women from every branch of the bike industry, the informal roundtable style discussion will cover issues facing women in a mostly male-dominated field. Panel participants will discuss their work, brainstorm how to get more women out riding, and answer questions about women-specific bicycles and training.

Consisting of mechanics, activists, apparel makers, a framebuilder, a racer and more, this is an extraordinarily diverse group. Just a few of the participants are:

With so many knowledgeable women from such varied backgrounds, this promises to be a don't miss event for cycling enthusiasts of all genders.

Offsite Blogging LXXXVI
This week at Orange 20, I celebrate the wee Taste of Winterwe got a few days ago, and offer some recommendations for riding on through the season's cold and wet.

And at Flying Pigeon LA, I ponder a semi-proposed 6th Street road diet and ask, on the road's behalf, Do These Lanes Make Me Look Fat?

Tuesday, October 16th
Summer Heat, Autumn Plans....
Just so you'll know: we are beginning production runs of men's and women's full-length riding pants for our friends at Clever Cycles in Portland, Oregon. this is for their "Stealth Pantaloon" series, cycling trousers that are great for pedaling yet look perfect for office, dinner, visiting, what have you when you're off the bike. So that you can easily ride anywhere!

We're filling in sold-out sizes in the men's version, but the women's cut is new—Clever Cycles estimates that over half its customers are women, which says a lot of good things about cycling in Portland.

These are the style that Clever Cycles' Todd Fahrner wore on his 2010 pedal from Portland to San Francisco by Brompton.

So keep your eye on this blog, or Clever Cycles' own website, for the announcement in a few weeks.

Closer to home—much closer—I am happy to report that I had to take my bike into the factory with me when I visited this afternoon—because all the numerous bike racks on Los Angeles Street downtown were occupied!

In fact, everywhere I rode I saw plenty of bikes, on the move in the streets or locked to racks, meters, poles, trees, whatever. In spite of intense heat, upwards of ninety yet again....

Saturday, October 13th
What Is Chic? Does It Matter?
Even though I design dressy bike clothing for a living, I am getting mighty tired of all the Spandex-spiting that is prevalent among urban cycling advocates these days. I find it dismayingly ironic that folks who want cycling to be more inclusive should feel that they can make it so by excluding a clothing style and the type of riding it represents from the List of Approved Cycling Modes. Since I don't feel ready to buy a pair of stiletto heels just so I can garner the approval of the bleeding-edge chic, I am going to open my mouth at least wide enough to put my foot in it.

I've been riding bicycles for transportation nearly continuously for around forty-five years. For about the first twenty years, I rode mostly in blue jeans and tennis shoes. Blue jeans are tolerable for short rides of two or three miles, sometimes—if it's not too cold, not too hot, and not too wet. (Cold, wet blue jeans are truly a misery, even if you're not trying to pedal in them at the time.)

But after a while I started riding farther and farther. Southern California is a big place, full of vast extravagant beauties and small hidden charms, and the jeans weren't up to snuff. Or maybe I wasn't masochistic enough to tolerate them. Reluctantly, I bought some (plain, black) Lycra tights.

Epiphany! I felt as though I could ride twenty miles farther with almost no effort! (And don't tell me I needed to trade in my road bike for a bolt upright Dutch cruiser—not till you've ridden one back and forth over the Santa Monica Mountains for a few hundred hot summer miles. If you survive that, I'll consider what you have to say.) I went farther, though not faster, up more and steeper hills, explored smaller and more obscure roads, discovered worlds both human and natural I'd never suspected. I won't complain about my time in Lycra.

I was never shy about wearing tights, either. I've got nice-looking legs, after all that riding, and Californians are not generally uncomfortable with being human anyway; the body is not evil here. But still, we have all kinds, and I knew some other people were in fact shy about men in tights, and I was tired of carrying a change of clothes with me to work, and...well...I missed having pockets!

Waist packs struck me as somewhat awkward, and one more thing to carry around. So I designed and started manufacturing the dressy bike duds sold on this website. Trying to split the difference, making elegant clothes that still work well for longer rides. (Anything suffices for a one-mile ride, but that's a walk in my book.)

It worked. In fact, though I started off wearing Lycra tights under my wool knickers for longer rides, after a while I gave it up. Rode my most recent century—on a vintage Italian racer converted to fixed gear—wearing regular off-the-shelf boxer shorts under my Classic Wools. No problem!

But, though I move along fairly quickly, even now while recovering from a small stroke, I don't go roadie fast. If I did, I would be in Lycra. More work, more wind, all that stuff.

Of course, I've heard some folks say that there's no need to go fast on a bike. And they're right! There's also no need to drink good beer or fine wine, listen to music, sit at a sidewalk café with friends, or stop for a moment to look at the sunset. We do those things because they feel good. And so does riding a light road bike fast. Even if you're riding it to work! (Which happens a lot in Southern California, where work might be twenty miles away.) This makes Lycra much more practical than a suit, trenchcoat, and beret for that particular ride.

What makes clothing "practical" anyway? Anyone who remembers the Mao suit prevalent a few decades ago in China when it was still the "Kingdom of the Bicycle" might know the answer. As for the rest, any decorative clothing is as silly and pretentious as team kit, if you think about it. Especially the heels and minis, the sundresses, the suits that have become the modern cliché of velocipedal fashion. Somehow, a "practical" bike has been redefined as one that lets you wear impractical clothes.

Heels cause deformities; my own mother had to have her toes broken and reset after wearing high heeled shoes for most of her middle years. And suits! Cinching a vestigial scarf tightly around your neck to proclaim solidarity with the corporate culture that has brought life on Earth to the brink of collapse? This is chic?

Sure, there are Lycra louts out there. So what? There are louts everywhere, in every type of attire. Disdaining someone because they don't reinforce your preconception of what is hip is profoundly loutish in itself. Reminds me of Mick Jagger's line in "Satisfaction," where he sneers (ironically, of course), "He can't be a man 'cause he does not smoke/The same cigarettes as me."

He might have been talking about those folks who judge us by the cut of our clothes and the shape of our steel.

Ride what you want, wear what you like, be kind to the people around you.

The rest is pretention.

Wednesday, October 10th
Offsite Blogging LXXXV
So last week was anticipating CicLAvia, and this week it's reveling in the afterglow! See Another Day of Joy on Orange 20's blog, and Dream Come True on Flying Pigeon's.

What a fine day it was! 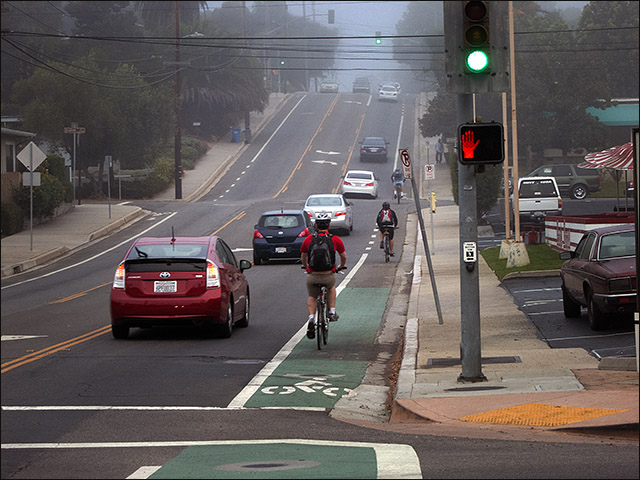 Bike lane on California Street, San Luis Obispo
Not many pictures this time, because this was a real vacation, not my usual working vacation. But of course I can't help taking some photos of bicycle infrastructure, wherever I am. And so for this week's little journey....

We got on Amtrak's delightful Coast Starlight last Sunday with a couple of folding bikes and rode it up to San Luis Obispo in the the Central Coast wine country. It's a great eating town, surrounded by farm country and vineyards in rolling oak-studded hills, and only ten miles form the Pacific Ocean. There's a big college there—Cal Poly—and a sweet downtown centered on a creek. Lots of older bungalows and newer copies of older bungalows, and, unfortunately, a number of strip-malls outside the literally brick-and-mortar core.

And plenty of bicycle infrastructure: bike lanes, bike paths, sharrows, bike racks, and even a number of bike corrals. Ditto cyclists—not just college students, though there were plenty of those, but men and women of all ages, some on road bikes, but many more on utility bikes. Our bed & breakfast had bikes for guests to use and a nightly lockup room for those who had brought their own (non-folding) bikes.

We rode everywhere—to shopping, to meals, to and from the train station of course, and one hot but clear day along the main road through the wine country.

This last brought us to the quietest place we'd been in years, where a car passed maybe every eight or ten minutes, and the only sound was of grape leaves rustling in the breeze. We stopped at three tasting rooms to sample wines, and the carry bag, which was mounted on my bike, got heavier as we chose bottles to bring home. Our ride went as far as Pismo Beach, so counting the return trip we rode about twenty-eight miles. My longest ride since the little stroke in August.

Back home now, refreshed and relaxed, and a little fatter. Time to ride more! 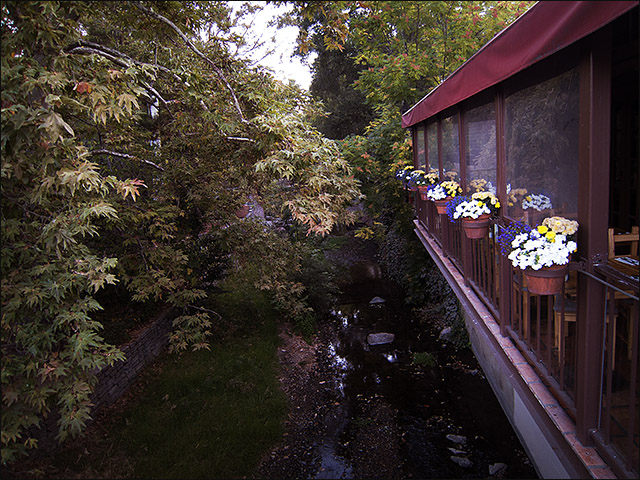 Creekside Brewery, in downtown San Luis Obispo, one of our lunch stops

Thursday, October 4th
Offsite Blogging LXXXIV
I'll have some pix of bike infrastructure in San Luis Obispo, California, where we just enjoyed a brief vacation, a little later this week, but first I want to give all Los Angeles bike riders aheads-up: CicLAvia, our open streets event, is back this weekend!

Read all about it on Orange 20, in my post entitled Better than Christmas!, and at Flying Pigeon LA, in Happy Day Is Here Again!.

And I'll make every effort to temper my use of exclamation points next week....