Bicycle Fixation Weblog
Home » Archives » July 2008 » Potholes for the People
Tuesday, July 29th
Potholes for the People
Well, I finally got around to photographing just some of the potholes on 4th Street here in Los Angeles, and wrote up a little story about it. This street is the focus of an effort to create the first bicycle boulevard in LA. I'd say it needs a little more basic attention first!

Read all about it in Fourth Street: Boulevard of Broken Wheels

Because of the blistering volume of LA traffic noise, my cell phone's ringer is set REALLY LOUD, but of course I was cruising through a leafy, almost deserted neighborhood of ivy-clad mansions, so I damn near fell off the bike when it rang.

It was the downtown contract factory that makes our Bicycle Fixation knickers, hats, and so forth, calling to say that they couldn't find the zippers for the Secret Jersey!

Now, the Secret Jersey is my big hope for a semi-solvent year, so this was distressing news to hear while straddling my Bottecchia under a tree in front of a house that costs more than I've ever earned in my life, or am likely to. True, I "own" Bicycle Fixation, but given how undercapitalized we are, what I really own are debts....

Back and forth I went with Lanana, the workshop owner, trying to remember where either she or I had put the bag of zippers....

Would the zippers ever be found? Would the Secret Jersey come out in mid-August as planned? Will Rick ever pay off his credit card?

Well, I won't keep you hanging--while we spoke, the zippers appeared as if by magic in Lanana's hand, and I could continue on my way...dreading yet another squawk of the cell phone, bringing news of yet another difficulty.

Fortunately, the damn thing has remained smugly silent. I can relax a bit...if I can remember how to.


Thursday, July 24th
Not Long to Wait....
Okay, folks, there's not long to wait for the Secret Jersey and a replenished supply of Classic Wool Knickers, as they are both in production in our factory Downtown Los Angeles right now.We expect to have them on sale by the middle of August, and maybe sooner; we've asked the factory to finish the smallest color runs of each item so as to have more elegant, rugged bike clothing available for you as soon as possible.

There will be a little surprise for you Classic Wool knicker fans, too.... 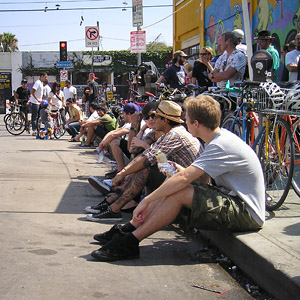 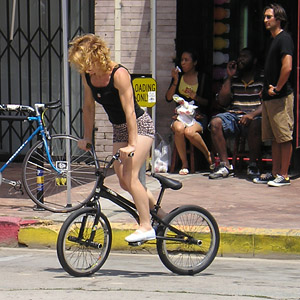 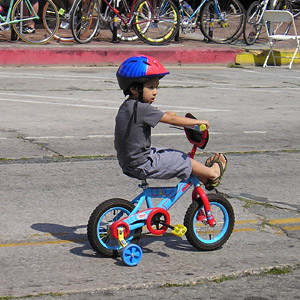 Sunday was the Bicycle Film Festival's annual block party at Heliotrope & Melrose, the LA "Bicycle District" corner that is home to Orange 20, Pure Luck, Scoops, and the Bicycle Kitchen, all of whom sponsored the event.

Though publicity was a bit lacking this year, resulting in a smaller crowd than usual, a crowd there was--a couple hundred happy cyclists arriving throughout the day on fixies, cruisers, road bikes, BMXes, MTBs, Xtracycles,and just about everything else that had two wheels and pedals, including a tallbiek or two, and a couple of ancient rustbuckets that were well beyond identifying. Kids, too, a couple of whom engaged in modest versions of the tricks performed by their pierced and tattooed elders!

Ines Brunn, of YouTube fame, was there with her glitter-clad fixie, doing the dance-like acrobatics that have won her fame, and clowning around on a BMX bike before her show. It was a typically spectacular performance, as anyone who has seen her can imagine.

Unfortunately, the vegan biker brew pub Pure Luck was closed for the day, having suffered a peculiar accident when a drunk driver veered onto the sidewalk and smashed into their portside picture window--apparently late at night, so no one was hurt, but it left us without any means to assuage our hunger but more ice cream at Scoops! (Tai Kim of Scoops, a Cal Arts graduate, is the undisputed world master of ice cream, both milk- and soy-based.) The accident also left us few options for the soothing of our thirst--a pal handed me a Budweiser, which reminded me why I am an unprepentant beer snob. Liquid cardboard!

Patrick Miller, aka Trickmilla, spun the turntables with his usual mastery, and various laddies and ladies hit the asphalt (sometimes literally) as they showed off spins, skids, and jumps. Various friends cruised by--Chuck Schmidt, John Vu, Patrick, Brian, Patty, Derek, and more--and I spent a good half hour inside Orange 20 talking with Jim C., one of the finest folks in LA bikedom.

Unfortunately, though this time, I had remembered my "real" camera, I hadn't remembered spare batteries to replace the ones that died halfway through the fun. I did manage to snag the shots you see to the left....

I had to leave early anyway, so I missed the stem-humping competition--oops, I mean skidding contest--as well as the trackstands (which always leave me jealous, as my own trackstands have a somewhat drunken quality to them which unfortunately I don't require booze to induce), a lot more music, and the evening revelry, but it was plenty good to see the bikes and feel the comradeship in a tiny slice of an LA street given over, if only for one afternoon, to humanity instead of cars.

And all day long more bikes poured in through the street barricades, singly or in groups, smooth and silent in the sun, building up a lot of bike love in LA on that sunny Sunday.

It happens every year--don't miss it next time!

Thursday, July 17th
Dennis Crowley Dies at 60
Friend and cycling advocate Dennis Crowley died in Pasadena a few days ago. I had known him on and off for about fifteen years, mostly in connection with his efforts to revive the Horace Dobbins Cycleway, a bicycle freeway built in 1900 between Pasadena and downtown Los Angeles, and which eventually became the Pasadena Freeway. It was only a month ago that we had coffee together with Chuck Schmidt at Buster's, by the Gold Line's Mission station.

Although he put in a great deal of work on Pasadena's general bicycle planning, the Arroyo Seco Bikeway--bits of which have been built--was the focus of his public life. Let's hope, as he would, that efforts to realize it continue.

A heart attack is suspected, but at the time of this posting there is no official cause of death.

You can read an obituary reprinted from the Pasadena Star-News at the California Cycleway website. And the go on to read more about his dream.

Monday, July 14th
It's a Gas without Gas....
Had to go downtown today to buy more wool for another run of Classic Wool Knickers, and I ended up taking the green Gopher, my fixed-wheel errand bike with the silver fenders and the beat-up old JANND panniers. It's definitely not the sportier of my two bikes, but I had to do my mother's grocery shopping before heading east, so that's the one I took. It was a good excuse to take it easy as I loafed along 4th and 7th streets on my way to the Garment District. (Of course, now it's officially called the "Fashion District, but, feh, it's all shmattes anyway!)

Dropped in at the factory where I left the bike and checked up on what progress we're making on the Secret Jersey, then headed off on foot to B. Black & Sons, my wool merchant for wovens.

Happy day! They had found a stock of my favorite gabardine, the one I've used for the last three or four runs of Classic Wools, so I bought all 98 yards, and begged and pleaded that they dig up some more for January. Then I borrowed a (ridiculously small) dolly and commenced trundling the fat little roll of expensive string over to Broadway & 9th.

Downtown is always lively during the day, and as i dodged around shoppers, workers, and homeless folks, I listened to conversations fading in and out of earshot as I walked, or music playing from storefront speakers. Bikes were everywhere: delivery bikes porting pizzas and panini, messenger bikes carrying all those Important Documents from glass tower to glass tower, and just plain bikes of every description being used by folks to carry themselves hither and thither: road bikes, fixies, cruisers, and even a long, gleaming lowrider, complete with 60-spoke wheels, ridden by a shabby older fellow who apparently still felt a need to represent....

Dropped off my wool, returned the dolly to the wool merchant, and strolled back to the factory to go over details and schedules, then rolled the Green Gopher to the elevator bank.

A woman in the elevator asked if the Gopher were single or fixed, and when I replied "fixed," she said she admired my "courage," as she rode fixed only on the track!

And all my business done with no use of gasoline by me, at least.

Thursday, July 10th
Texas Gas Tax massacre
The following has been known to analysts for decades, but it's interesting to see it coming out in Texas, of all places, a blatant admission of how undertaxed driving is. A quote:

...No road pays for itself in gas taxes and fees. For example, in Houston, the 15 miles of SH 99 from I-10 to US 290 will cost $1 billion to build and maintain over its lifetime, while only generating $162 million in gas taxes. That gives a tax gap ratio of .16, which means that the real gas tax rate people would need to pay on this segment of road to completely pay for it would be $2.22 per gallon. This is just one example, but there is not one road in Texas that pays for itself based on the tax system of today. Some roads pay for about half their true cost, but most roads we have analyzed pay for considerably less.

Read the full article at CommuteOrlando: Do Roads Pay for Themselves?

Overall, most roads cover about half or less of their costs from fuel and car taxes and fees in the US.

In other words, those of us who use less road surface (such as cyclists, pedestrians, transit users, stay-at-homes) subsidize road hogs. (Mass transit uses roadways more efficiently than cars do, and of course rail transit doesn't use them at all.)

Moonlighting....
Soem of you may be interested to know that I'm moonlighting a bit, blogging on urban cycling issues (what else?) four days a week on MyByk.com. MyByk is a new social-networking website dedicated to the bicycling community, and encourages all of us to post photos of our rides, participate in forums, set up our own blogs, and make friends. It's in beta mode still, so new features are showing up regularly, and current ones may move around a bit, but it looks like the real deal, so check it out: MyByk.com. And look for blog entries by "rickrise," that being me, of course!