Bicycle Fixation Weblog
Home » Archives » April 2011 » Beyond Freeways
Saturday, April 30th
Beyond Freeways
Let me refer our readers to an article of mine in our sister publication, The New Colonist, once more talking up the GRID project as an alternative to the 710 freeway expansion--and perhaps to the entire freeway. It's called, Start Making Sense: Beyond Freeways, and the project in question includes a bikeway as well as TOD, river restoration, and electrified freight and passenger rail. It'll be mighty nice if we can pull it off.

There's also an article by Syed Saiful Alam wondering why Dhaka (Bangladesh) keeps trying to ban cycle rickshaws when they are both popular and efficient...see Banning Common Sense: Dhaka and Its Cycle Rickshaws.

We have over a thousand articles online at The New Colonist, so cruise the front page, browse the blog, dig into the archives...you'll be well-rewarded!

Gotta say that Long Beach is doing an excellent job of rolling out extensive and effective bicycle infrastructure of all sorts!


Sunday, April 24th
Making Tracks in Long Beach
Yesterday, I threaded my way through Downtown, rode south on Broadway to Imperial, then cut east to catch the Los Angeles River bike path for a jaunt to Long Beach.

Though I was tired, it was a worthwhile ride...not just because of the river, which I love to cruise along, but because Long Beach was set to celebrate the opening of its new cycle tracks, the first in Southern California: a pair of separated bikeways along a couplet of one-way streets in the heart of the LBC's downtown.

Set between the curb and an asphalt median, and further buffered from traffic by car parking on the outside, the facilities include decorative planters (designed by a longtime local artist) and dedicated traffic signals to reduce the chance of conflicts with left-turning drivers.

Lots of people showed up from all over Long Beach and even, like me, from LA. Here's a little slideshow of the pix I took while I was there:

The speakers included the much-loved Charlie Gandy, mobility coordinator for Long Beach, and Dr. Suja Lowenthal, active local cyclist and a powerful proponent of urban cycling on the city council, plus a variety of other politicians and business people.

Indeed, a dominant theme in all the speeches was how bicycle facilities such as these can serve to improve not only safety and air quality but the incomes of local businesses. Besides that cyclists can window-shop more easily than harried drivers, and require much less room to park, the road diets that opened up space for bikes also slowed car traffic, improving safety for pedestrians and, incidentally, making it more likely that motorists too will see an interesting shop or restaurant and decide to stop for a bit.

I gave in to the fatigue of a very busy couple of weeks, and took the Blue Line back to downtown LA. As the train rolled through Long Beach streets to the city's northern border, where it enters a dedicated right-of-way, I noted that the LBC had placed dozens of new bike racks all over town, not just in the city center. Their commitment to cycling is earnest indeed.

I got off the train by LA Live, another typical LA megaproject that does little for its neighborhood besides draw in congestion, and rolled down Pico toward home, wondering when LA would start to pay as much attention to the details of of life on the street and sidewalk level as Long Beach.

It would do us good.

And on Orange 20, I grouse about roadies and their SUVs in Not at All Green.

Monday, April 18th
Bicycle Parking and the Local Economy
Can't let this one go by unremarked: Elly Blue has written a superb roundup of the importance of providing adequate bike parking not only to cyclists but to local businesses. In just one example, she says:

Take the example of Fort Worth, Texas, which recently paid just over $12,000 to purchase and install 80 new bike staples in its Near Southside shopping district, (thanks to Fort Worthology's Kevin Buchanan for the tip). Each staple holds two bicycles, so the total cost was $78 per space. An additional $160,000 is being spent to restripe the streets in the district, replacing two car traffic lanes with bike lanes. According to Buchanan the changes have resulted in a nearly 200 percent increase in business for restaurants on the district's popular Magnolia Street.

Read the rest of the article on Grist:

Take a look at it here.

Thursday, April 14th
Offsite Blogging IX
A bit behind with this announcement, as I've been caught up in both an article due tomorrow and preparation for the Miracle Mile Art Ride mentioned in the previous post. And CicLAvia!

At Flying Pigeon LA, we've got Power to the People and We've Got a Plan,, both covering the importance of the city's bike co-ops and social rides in bringing about a real bike plan.

At Orange 20, we cover CicLAvia and its salutary effect on local merchants in Market Forces.

A good if frenzied week in all!

The Miracle Mile is one of Los Angeles's most appealing neighborhoods, with high population density, significant architecture, dozens of fine and casual restaurants, several large parks, and a high concentration of art galleries and museums, including the world-renowned Los Angeles County Museum of Art. It is well-served by transit as well.

However, this is Los Angeles, and so the art galleries participating in the art walk are rather too sprawled out actually to walk to. With the free shuttle not available this year, Bicycle Fixation offered to host an art ride so that visitors could view a variety of galleries without having to drive and park around the district.

Meet us in front of the famous Lamp Sculpture at LACMA (Wilshire & Ogden) at 3:00PM. We will lead you to several gallery clusters or especially significant single galleries, where we will guard your bicycles while you peruse the art within.

We live in the neighborhood and will choose quiet side streets whenever possible for the rides.

Please make sure your tires have sufficient air pressure in them, and wear a helmet if you are under eighteen, as that is required by California law.

We have written directions for riding your bicycle to the Art Walk as well; see them here.

For more information about the Art Walk itself, see the Miracle Mile Art Walk website.

This is a social ride on open public streets; by participating you agree to free Bicycle Fixation, the Miracle Mile Art Walk, and the Mid City West Community Council from any liability for accidents or injuries. You will be expected to obey all traffic laws relevant to bicycles in the state of California and the City of Los Angeles.

Tuesday, April 12th
CicLAvia, April 2011 Edition
Of course, we were at CicLAvia last Sunday. How could we miss it? Even though I still had a bad cold, we saddled up early and rode...not to CicLAvia itself, but to Highland Park (with a lift from the Red and Gold Metro lines for Gina, who isn't as accustomed to long rides as I am) for lunch at bicycle-friendly Good Girl Dinette. Another hop on the Gold Line took us to Boyle Heights, wehre we eased through the barricades and joined the fun.

Much bigger crowds than last years! And, tellingly, this time merchants who had stayed closed, or even closed up in fear of car-free roads, were open--and thronging with business.

Of course, you can deliver far more customers to most establishments with bicycles than you can with cars, so the bars, restaurants, markets, and other stores that showed some real business sense and reached out to the day's cyclists were raking it in, to judge from the crowds of bikes outside, and the corresponding crowds of riders inside.

The weather was beautiful, the riding relaxed, the faces happy, the crowd inclusive: black, white, brown, and yellow, old and young, rich and poor, fat and fit, and everything in between, all mingling peacefully on bikes, on foot, on skates, on their way at a gentle pace. Friends and strangers alike talking with each other. Pure urban magic! 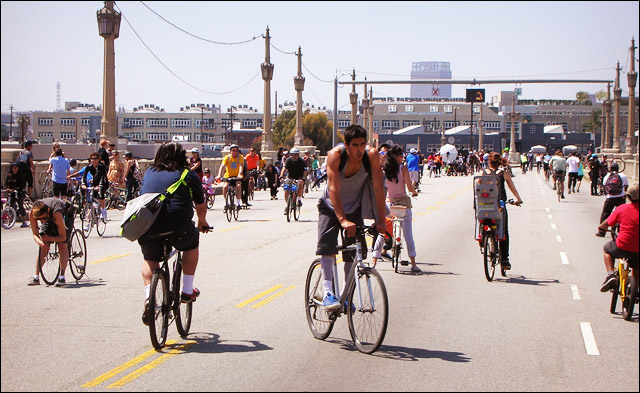 CicLAvia was inspired by the famous ciclovías of Bogotá, which started over thirty years ago and have transformed that city. There are two more planned for this year--details at the CicLAvia website.

We'll see you there next time, right?

CicLAvia Once More...
Friday we took Amtrak down to San Diego for the custom bike show there, and I'll write it up later, for there are about four hundred photos to process first.

But for a nice little digestif, today Gina and I rode LA's second CicLAvia, a street opening modeled after Bogotá's famous ciclovias of some thirty years' standing.

Three decades of precedent or not, it's a "radical" idea for Los Angeles, to ban cars from just seven and a half miles of roadway so that the streets can transport tens of thousands of people cleanly, sociably, and efficiently for a change.

I doubt that the route had ever moved so many human beings in so short a time!

And this time a number of merchants who closed up shop last year, fearing that no cars meant no customers, smartened up: a hundred thousand or more happy cyclists rolling slowly by your store might turn out to be good for sales...I blogged this earlier today at Orange 20; you can read it there.

Suffice to say that it was again a wonderful, exhilarating, sociable several hours, enjoyable in every sense.

I hope these two snapshots convey some of the feeling: 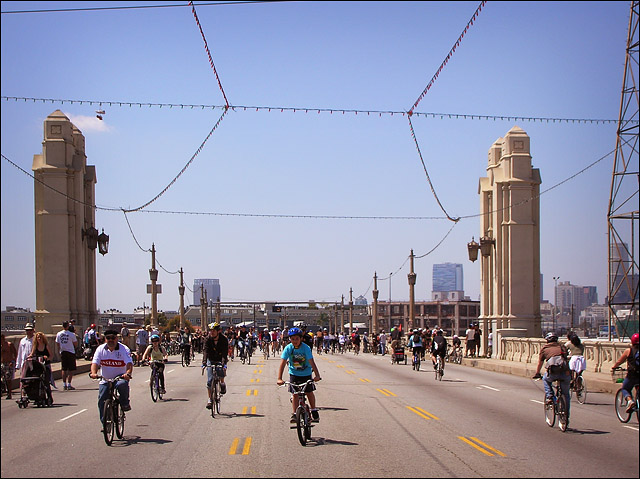 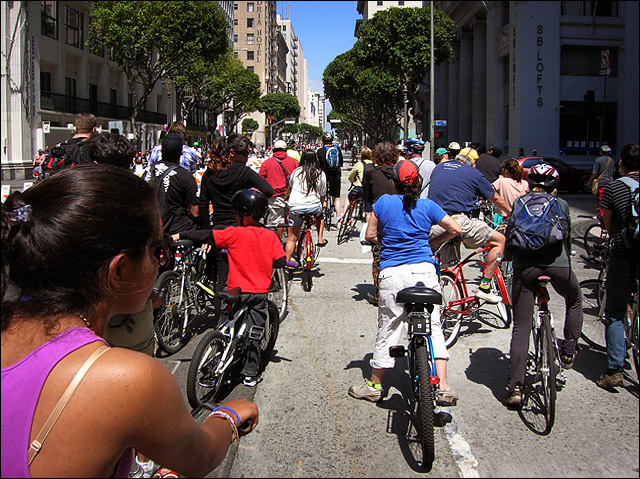 Sunday, April 3rd
Offsite blogging VIII
Two more as usual, leading off with How Soon They Forget, inspired by all the Santa Monica cyclists who braved the rain to find that the farmers market bike valet had stayed home.

And freshly uploaded a few minutes ago, Goes Around, Comes Around exults over a wonderful ride with Chuck Schmidt and the Vélo Rétro crew.

Saturday, April 2nd
Numbers & Numbers
Numbers part one: I've published a new article on the economic aspects of supporting utility cycling, entitled "The Bottom Line Speaks." it's an extended version of the article recently published by Cycling Mobility under the title "Planning from the Bottom Line Up," which is available by subscription only, as Cycling Mobility is a professional journal for government cycling officials and administrators, cycling NGOs, and independent planning agencies. The paper version is extremely handsome, and I strongly recommend a subscription if you are profession planner involved in bicycle infrastructure and planning in or out of government. Or just borrow one!

Numbers part two: while riding back from downtown Wednesday I routed myself along nearly the entire length of 4th Street as usual, though this time at the tail end of rush hour. I am happy to report that in the twenty or twenty-five minutes I spent on Fourth, I saw seventeen other cyclists using the street. These were mostly coming the other way, of course, since I would neither pass nor be passed by most people going the same direction. I also noted five or six riders on streets crossing 4th, but only counted the ones who rode along it.

And today, while riding fourth yet again with a bunch of LACBC folk to inventory potholes, I saw numerous other riders using the street to get somewhere, wearing everyday clothes including skirts or slacks.