And Flying Pigeon LA hosts a screed on how a little Equity, not Parity, in parking would make life better not just for our city's cyclists, but for everyone.


Sunday, February 26th
Almost a Birthday Ride
Nothing really to report, just a nice ride with a few friends on a Sunday--a pre-birthday ride, to be precise, since I doubt I'd get much company on the real day, tomorrow, which is of course a Monday.

Gina, who is immersed in a demanding work project, rode with me to Sabor Y Cultura, a wonderful coffeehouse in East Hollywood, where we all met up, then peeled off to Cafecito Orgánico where she set up her computer and worked while the rest of us had fun.

Charles and Carmen from Long Beach, John Vu and Emily H. from near Hel-Mel, and Eric Weinstein from Santa Monica all followed through Los Feliz to the Los Angeles River bike path, which took us past the ripples, egrets and blue herons (and grafitti) to Frogtown. From there we followed North Figueroa to Highland Park and a wonderful lunch at Good Girl Dinette--Judy B. (from the GRID project) and Velo-Retro's Chuck Schmidt and wife Cheryl joined us for food and conviviality.

The backside saw us stopping at Flying Pigeon LA to degrade my pal Josef's productivity for a while. Then we headed to downtown, crossing the Graffiti Footbridge over the Pasadena Freeway to get us to the new bikelanes on 18th and 19th Streets, Chinatown, Echo Park, Silverlake with its hordes of cyclists, and finally Hel-Mel, where we rejoined Gina and indulged in artisanal ice cream.

I took the camera; however, I am both proud and sorry to announce that I took not one single picture, but just enjoyed the day as it happened, for what it was.

Friends, food, and bikes--life is good!


Wednesday, February 22nd
Offsite Blogging LII
Two more blog posts focussing on Santa Monica, which is doing so much for cycling that it would seem extravagant--except that cycling is giving right back to the city as riders swarm its stores, eateries, and markets.

On Orange 20's blog, read about Lessons for the Learning, and at Flying Pigeon LA, I gush about the permanent Sunday bike valet on SaMo's Main Street, in The West Is in the Red.


Saturday, February 18th
Right and Wrong
There they go again.... The New York Times reported today that the Best and Brightest of the GOP are planning a new round of attacks on President Obama, focussed on high fuel prices. (In fact Santorum led the first skirmish last week.)

This leads me to think that the GOP is populated by either hypocrites or fools--or a ghastly hybrid of the two.

They may not want to believe it, but the easy oil supply is inexorably diminishing, and will not return in our planet's lifetime. We've used it almost all up, and that's all there is. The alternative oil sources currently beloved of our sandbox bullies on the right are so expensive to extract and refine that they remain viable only while prices are high, and will not lower gasoline prices.

Unless, of course, the government nationalizes those operations and runs them at a loss. Not a likely scenario under any probable GOP regime, that one!

Meanwhile, obsessive automobile dependency mandates stressful, sedentary commuting and requires the never-ending provision of expensive and ineffective roads and parking facilities that crush neighborhoods, obliterate small businesses, and drain civic coffers. We have yet to learn that seventy years of desperately laying down asphalt has increased, rather than reduced, congestion--though anyone who ever goes outside can see the results of that program.

(We'll leave out its effect on the biosphere, though that will likely be the most devastating of all, since after all, it won't take place within the next quarter, which is as far as the GOP can see.)

And so the GOP vigorously tries to slash funding for transit, walking, bicycling, alternative energies, and anything else that could ACTUALLY reduce travel cost burdens--whether by lowering oil prices through reduced demand, or by making oil irrelevant--then tries to blame Obama for high gas prices?

The attempts to gut programs that support transportational bicycling are particularly stupid, especially coming from the right.

What mode of transport most purely embodies the traditional conservative values of self-reliance, fiscal and material prudence, and old-fashioned neighborliness?

Why, the bicycle, of course!

This new right-wing effort is not a sign of either intelligence or honesty, and even less so of political maturity.

Or any other kind.

This week, on Orange 20, I ask What Is Hip?, and conclude that whatever ti is, it ain't either of my bikes.

And over at Flying Pigeon LA, I just gotta ask What's Wrong Here?--and of course tell you what I think it is.

Saturday, February 11th
A Bicycle Valentine
Here, inspired by LovelyBicycle!'s "Velo Valentine" contest, is my own cycling-themed valentine, addressed, of course, to my dear wife Gina:
The winter sun leans on a fading sea
and breathes its light across the road. Once more,
our pace a mockery of dreams of speed,
we pedal side by side, home from the store.

We chase no magic, seek no hidden key,
discern no secret words in wisps of cloud--
bags and basket stuffed with prosaic leaves,
we weave our path through a metallic crowd

of blank-eyed cars. You laugh, and ring your bell;
That's all. A tiny outburst of plain joy.
The sun, casting my shadow on your wheel,
transforms my profile to a glittering toy.

It spins ahead of you, out of your sight,
as side by side, we play in earthbound flight.
With all my love, from Rick.... 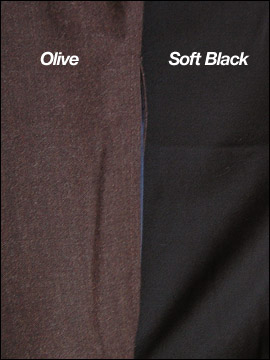 Bicycle Fixation's Classic Wool Knickers are finally back in stock, after the usual delays in our capable but overworked downtown factory.

The price went up slightly, to $119.00, as we bit the bullet and went with a higher grade of gabardine than was strictly necessary--just because it was so beautiful. Still a bargain for elegant knickers of this quality.

Two colors, again: what we call Soft Black, a charcoal without any hint of harshness in color, weave, or drape, and our trademark burgundy gusset, and Olive Brown, with a black gusset. We've run Olive Brown before--the photo with a leg in it is an earlier version--but none we've seen before is as visually pleasing as this one.

The likelihood of our finding these fabrics again is low, so don't hesitate. The Olive Brown in particular is in short supply--we could get enough cloth to make only twenty pair, and only in the sizes shown.

You bigger folk take heed as well: we have sizes 40 and 42 in stock in Soft Black only.

Details on our shopping cart here.

Wednesday, February 8th
Offsite Blogging L
Still harping on bike parking at orange 20, with a post on the unexpected potential of LA's new bus benches as supplementary racks in Don't Knock This Opportunity.

And I muse on bike trailers, bakfietsen, longtails, and life in LA in Know When to Fold 'Em on Flying Pigeon LA's website.

Saturday, February 4th
Small Victory
Another small victory, though one that involved considerable negotiation and even a bit of infighting in LA's fractured cycling advocacy world. Yes, some of our own were bitterly against the facility pictured in the snap I took yesterday: 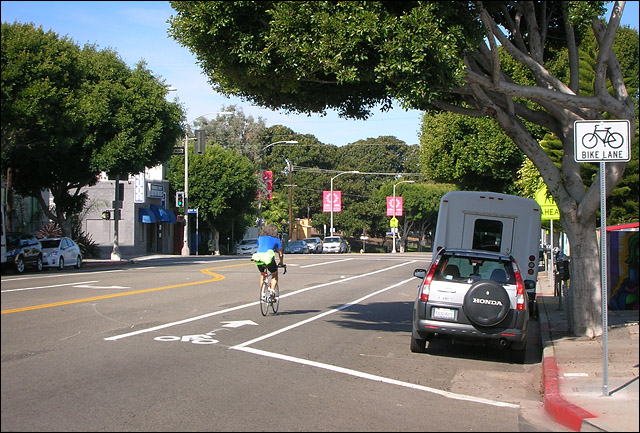 This is a rare example of interjurisdictional coordination, even if it basically involved shouting between civic silos. Main Street spans both Santa Monica and Venice, the latter being not a city of its own but a distinct, and distinctive, neighborhood of Los Angeles. Santa Monica has had bike lanes on its portion of Main Street for several years now. That city's portion of the street swarms with cyclists of all sorts, and particularly everyday-cyclist types, who ride for pleasure and transportation, not fitness and competition. The numerous bike racks are always crowded, as are the adjacent restaurants, bars, coffeehouses, and shops.

Likewise on Abbott Kinney, Venice's own little main drag, which feeds into Main Street near the border between the two towns. LA recently added sharrows there, and greatly increased the number of racks, with the result that you can barely wedge yourself into Intelligentsia (my own fave coffeehouse on the strip).

But LA's share of Main Street, though it has shops and a number of bike racks, just hasn't had the scene yet. It is far to walk to, tedious to park on, and dreary to ride through--but that has just changed, and I suspect we'll see a jump in street life as cyclists discover the new bike lanes that went in last week.

LA's new stripes run from the Santa Monica border south to Venice Circle, a much-needed addition to the network.

Now I hope the city will eventually see fit to extend them past the traffic circle to Venice Way, Mildred, and eventually Washington Boulevard, where they would take riders through the Marina to points south, including the Ballona Creek bike path and the South Bay beach cities.

Wednesday, February 1st
Offsite Blogging XLIX
Last week I snagged a picture of bikepath buddy Dennis and his 85-year-old President bicycle, his daily ride, and wrote them up at Orange 20; read the story at Time and the Pedals Turning.

And today I filled Flying Pigeon's blog with chatter about an unexpected possibility for siting bike racks in What the Center Holds.

And while you're here, don't forget the previous post on my own blog--just scroll down a bit--about Whittier's "Mystery Bridge."