Yeah, it's officially "Silver Lake," but even many of its denizens spell it "Silverlake," which I find to be typographically more felicitious. And it sounds the same, so just close your eyes when you say it, if you're an administrative purist. Which is to say....

Yeah, it's officially "Silver Lake," but even many of its denizens spell it "Silverlake," which I find to be typographically more felicitious. And it sounds the same, so just close your eyes when you say it, if you're an administrative purist.

Which is to say, I've decided to initiate an irregular series of restaurant reviews, starting with Sunset Boulevard through that neighborhood immediately west of Echo park, and limited to establishments that qualify as bike-friendly, whether by intent or just circumstance. They won't be full-scale reviews, especially since as a vegetarian I won't sample the full range of wares at most places, and couldn't afford to anyway. But I can give an idea of the range of offerings, how good a meal or two I try there turns out, and whether the atmosphere is exciting, relaxing, homey, elegant, whatever. What the street life is like around each place, and what form the bike-friendliness takes.

It's really just an excuse to eat out more, and a guide to those who need no excuse and are heading out to breakfast, lunch, or dinner on two wheels. 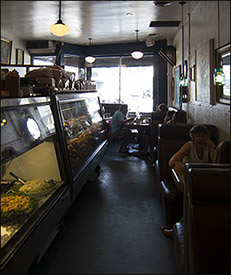 Third victim: Flore Vegan
Silverlake is becoming a culinary paradise for vegetarians and even vegans. Just down the street from Cru, the first restaurant in this series, is Flore Vegan, serving up surprisingly hearty fare in the form of wraps, sandwiches, salads, burgers, soups, and pizzas.

They do serve mock-meats, which I as a long-term vegetarian don't particularly favor; I don't miss meat. But many vegetarians do, and many take carnivorous friends out to lunch or dinner sometimes, so they have their place. For myself, I chose their reuben sandwich, made with tempeh and sauerkraut—I love sauerkraut!—and it was hearty without being heavy, balanced, and absolutely delicious. The accompanying salad was very good. Indeed, I wished I had been hungrier so I could order more!

But as it was, I have to say that, if this casual lunch was any indicator, the place is a keeper.

The inside is cozy and comfortable, with wood decor offsetting the presence of a deli counter, and quiet enough for conversation. I was alone, so I chose to sit outside, where street noise was a bit of an issue, but where the constant flow of people sauntering by made for a happy urban experience. Few places in Los Angeles have as much street life as Silverlake, which is one big reason I go there so often.

There are several bike racks within a hundred feet of the restaurant, but they are not infrequently taken up. I had no problem locking my Bottecchia up this time, but would have taken one of the racks across the street if I'd had to. There are few neighborhoods in LA with as much bike traffic as Silverlake, either—another reason I go there so often. And Golden Saddle Cyclery, whose owner Kyle I was annoying that day, is just around the corner.

Try this place out, even if you're not a vegetarian or vegan. You'll be able to imagine yourself in a sort of Wild West version of a Parisian sidewalk café. Good food on a great street, and lots of bikes— just what you're looking for! (No booze, though.)