[Previous entry: "Offsite Blogging XXVIII"] [Next entry: "A Day at the Beach"]

Click to enlarge Seventh Street is one of the roads I use most often in my daily riding around Los Angeles. It is a pleasing route into Downtown for me: the hills aren't too bad, the traffic isn't too thick, the pavement is in what.... 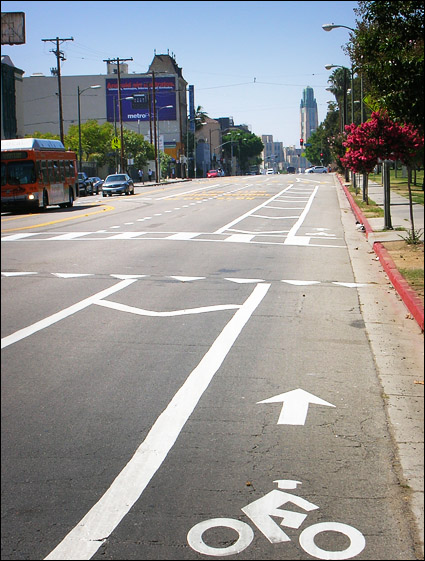 Click to enlarge
Seventh Street is one of the roads I use most often in my daily riding around Los Angeles. It is a pleasing route into Downtown for me: the hills aren't too bad, the traffic isn't too thick, the pavement is in what passes for "good condition" in Los Angeles, ie, it doesn't look like the aftermath of a mortar bombardment.

And it goes right to the heart of the garment district (excuse me, now called the "Fashion District") where, of course, I often roam buying materials for our Bicycle Fixation clothing line, or checking in at LCCouture, our contract factory.

There are also meetings at LACBC, City Planning, and LADOT that I occasionally infest, plus visits for sheer pleasure, as I love Downtown these days. Aplace that used to be filthy and dull is now dirty, amusing, and invigorating, and crammed with great little restaurants from felafel joints like The Sultan (felafel to vegetarian me, at least, though they call themselves a chicken joint), to Veitnamese fusion house Blossom, to highpockets établissements such as Bottega Louie, to a plethora of coffeehouses, noodle shops, Japanese restaurants, bars and breweries...in other words, places to eat and drink.

Click to enlarge
I ride Seventh quite a lot, almost as much as I ride Fourth.

So, you can imagine how pleased I was to find that Seventh, dear old bleak Seventh, finally stuck to its road diet and became LA's newest next-generation roadway!

Nice, fat bike lanes, mostly away from the door zone, a short section of buffered cycle track, and the four traffic lanes cut down to one each way plus a two-way center left turn channel.

The left-turn lane, by getting motorists waiting to go into driveways and side streets out of traffic, has actually increased the capacity of the roadway for motor vehicles--no more backups, no more wild lunges to the inside lane to get around left turners stalled by opposing traffic. The car lanes seem less congested to my eye--and I've ridden it post-diet numerous times now, morning, noon, and rush hour.

And the bike lanes are much more comfortable to ride in than the old shared lanes.

Best of all, our much-maligned LADOT got them done a month ahead of schedule!

They're really quite well done, and run from Catalina in Koreatown all the way to Figueroa for now. (Extensions to East LA are coming soon.) If you're in Los Angeles, give them a try.

Then go get something to eat.