[Previous entry: "Both More and Less than Paradise"] [Next entry: "Big Circle Day"]

But only literally...today, after a stop to visit Sacha White of Vanilla Bicycles (during which it finally rained, an intense, clattering downpour, though for only twenty minutes), we rode to visit our Portland retailer, Clever Cycles , sellers of Dutch cruisers, bakfietsen , longtails, and....

But only literally...today, after a stop to visit Sacha White of Vanilla Bicycles (during which it finally rained, an intense, clattering downpour, though for only twenty minutes), we rode to visit our Portland retailer, Clever Cycles, sellers of Dutch cruisers, bakfietsen, longtails, and various other commuter and cargo bikes, and some Bicycle Fixation products--including their just-released Belmont Stealth Pantaloons, designed in concert by us and Clever Cycles, and produced in our LA factory out of fine 100% wool.

In their own words:

They are made of the very best wool we could source, in a black gabardine and a slightly lighter-weight charcoal square weave. Think fine business wear material. They are light enough for summer plain, and for Portland's three cooler seasons with long merino underwear underneath.

Black and charcoal, the sum or absence of all color, go with everything, and hide the inevitable bit of grime that may escape from your bike, especially if you're one of those edge-seeking minimalists who ride with an exposed drivetrain. Unlike cotton blacks, the black stays black. Unlike synthetics, it's hard to make it stink, it's silent, it drapes better, it isn't particularly prone to snagging or ripping, and it won't melt too close to a campfire. Dirt, lint, and so on just brush off. Expect weeks of wear between washings.

They are made to the same standards as our flagship Classic Wool Knickers, and have touches specific to Clever Cycles that make them different from our own long pants, which we hope to introduce late this year or early next.

Todd, Martina, and crew have a wonderful, spacious, well-stocked, and friendly store that you really need to visit if you're anywhere near Portland--warm people and an intelligent selection of functional, elegant bikes and gear. Here are some snapshots I took during my visit: 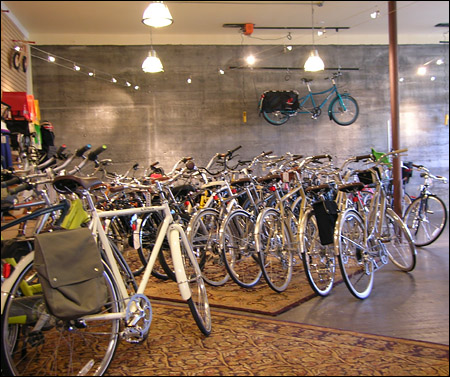 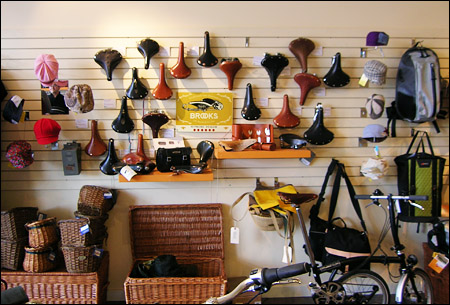 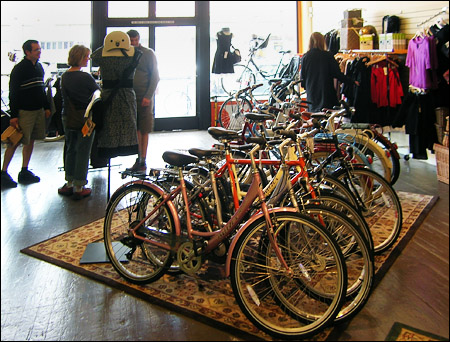 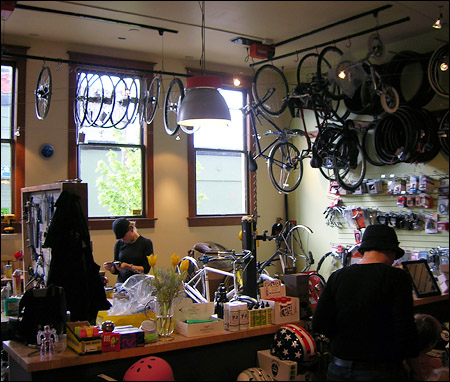 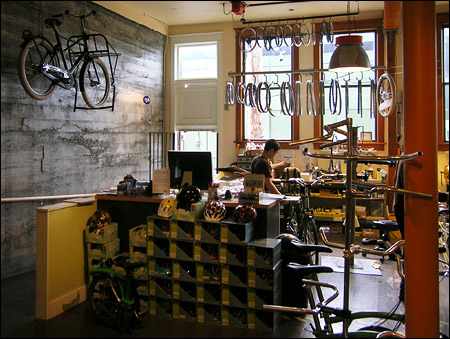 Another great Portland resource in what is becoming our favorite neighborhood, the South-East quadrant.
------
A telling little touch that exposes the care Portland takes with bicycle infrastructure: on the Hawthorne bridge, there is a steep run-up to bridge level...and the bike lane on that climb is in fact two bike lanes--so that faster cyclists can safely pass slower or heavily-laden riders!

Someone was thinking...what a concept!