[Previous entry: "Women and Wheels"] [Next entry: "Wool and Water"]

I didn't feel like doing much of anything today, as I've been harassed with family and money matters for months now, and possibly have a touch of flu as well--so I went out for "a short ride this time," as I told Gina. And to....

I didn't feel like doing much of anything today, as I've been harassed with family and money matters for months now, and possibly have a touch of flu as well--so I went out for "a short ride this time," as I told Gina. And to bring a little variety into my riding--even though I work mostly at home, my meetings and chores tend to make me a commuter with not one but three rather fixed routes I repeat week after week--I headed north, towards the hills, to noodle around in the little streets of Hollywood and then come home.

Or so I thought. But the hills started looking better the closer I got, so of course...

...I ended up climbing Nichols Canyon on the fixed-wheel Bottecchia and riding the ridgeline of Mulholland to the Sepulveda Pass.

Trying to be clever, I decided I really did remember the cut-off I'd traced on a map that eliminated the short but very steep climb up Woodrow Wilson to Mulholland itself, just before the very end of Nichols.

But either I'd misread the map, or misremembered the street name, for La Cuesta had not one but two pitches much steeper than Woodrow Wilson, and twisty, with shattered pavement thrown in for good measure. Bad enough that I walked about fifty yards total.

But it did let me see the delightful little glen pictured below: 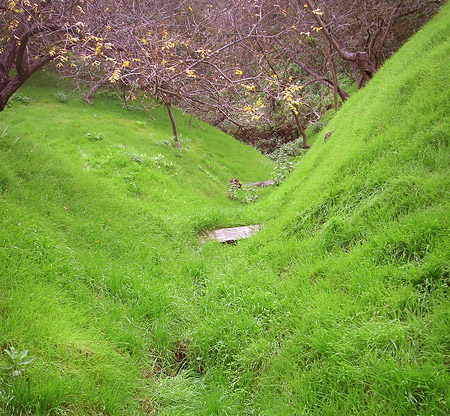 Once up on the ridge, the riding was easier, though of course the whole road is a series of rollers--but that means drops as well as climbs, which you don't get on the initial ascent. You also get a bit more company--mostly the usual grimly-silent roadies, though one fellow did give me a cheery "hello" as we passed in opposite directions. And I received a friendly nod from an enormous man on an even more enormous motorcycle, which was nice.

Then of course there are the Big Views that people go up there for, such as the rather Italianate one below: 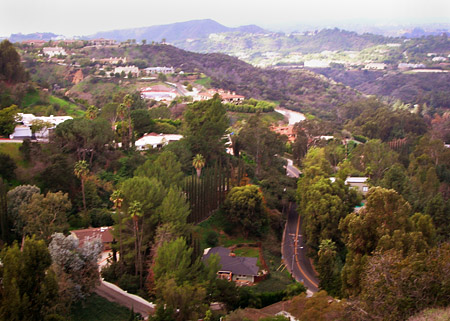 The air was brisk, the road (by now) not more challenging than I could handle, and the fixie's rythmn was easy; it seemed as though no time had passed before I arrived at Sepulveda Pass for the descent into Westwood, whence I went a wee bit farther west to San Vicente, the roadie heaven, where I stopped for a good strong latte and a magnificent almond croissant at Caffe Luxxe.

After a brief chat with Eric and Andreas, the baristas, I found my way to Santa Monica Boulevard and its actually functional bike lanes, which took me to the little street I use to sneak through Beverly Hills and so to the Miracle Mile, where the day began.

Just a nice Sunday ride. And I didn't even need to pull the rain cape out of the pannier...though it's sprinkling now.