As Los Angeles slowly lumbers into the future, one of the many projects being bandied about for the enhancement of bicycle commuting in the city is the conversion of Fourth Street into a "bicycle boulevard."

Although the concept of a "bicycle boulevard" is somewhat vague, it appears to be an enhanced bike route, with some infrastructure changes to make it more attractive to cyclists. For example, the Bicycle Transportation Alliance says that "On bicycle boulevards, stop signs are turned to keep cyclists moving, and traffic lights and curb extensions help cyclists cross busy streets. Traffic calming slows cars down, and drivers are discouraged from using them for cut-throughs." John Ciccarelli adds: "Through traffic can be further discouraged by breaking up long segments with bike permeable street closures and mandatory turns that admit through bicycles."

That is, in some cases, the changes could be as extreme as preventing through motorized traffic by blocking the street with landscaped islandsm which would have slots that would let cyclists pass through. (This traffic calming would also make the street more pleasant to residents). In other cases the changes might consist of nothing more than more blatant signage to attract cyclists and focus motorists' attention on the presence of bikes in the road.

In all present cases, bicycle boulevards seem to be routed along residential streets. Fourth Street is no exception, and it is in many ways a good choice: it's pretty, running through the upscale and shaded Hancock Park enclave for much of its length; it parallels busy Third Street and even busier Sixth Street and Wilshire Boulevard, which comprise one of the main commute corridors of LA; and it provides a comfortable way to ride between West Hollywood, the Miracle Mile, and Fairfax areas on one end, and Mid City and Downtown on the other.

Many cyclists already use it--in fact, when I am on it during rush hour, I often see more bikes than cars along the road. I have used it for nearly twenty years, and am on it nearly every day for some chore or other.

But many of my friends, won't use it, though they are strong, experienced cyclists. Why? In a word, potholes.

Back in the late 1800s, cyclists initiated the Good Roads Movement, in an organized effort to induce the paving of roads outside of cities, which would facilitate the use of bicycles, then the faster land transport modality available. And they succeeded! Unfortunately shortly thereafter the automobile came on the scene and usurped the roads, and soon required such vast paving projects that, at present, most municipalities are nearly broke and unable to repair the roads they have, even as more and more public money is devoted to building more and bigger highways for more and more cars, in an endless cycle that is as relentless as crack addiction.

But that era is winding down, and the bicycle is still here, still sensible, still efficient, and still plenty fast--often, in the city, faster than the car. But people aren't used to cycling in the US anymore, especially among cars, and so things such as bike lanes and paths and bicycle boulevards have come about to help us in our transition to a post-petroleum culture.

The Fourth Street project, which has significant political support in the city, is one of the more likely to be useful to real-world cyclists, especially new ones. But I suggest that before they start adding in landscaped islands, even before they start turning the stop signs at its intersections, they take a look at its bone-bruising, wheel-bending potholes...if nothing else, to help out the many cyclists who already use Fourth Street as their own bicycle boulevard, and don't really need new signs to get them to do it.

Look at the photos below, and you'll see what I mean. I collected these this morning (29 July 2008), on a one-mile stretch of Fourth Street between La Brea and Rossmore. And there were plenty of outtakes.

Would you want to ride there? 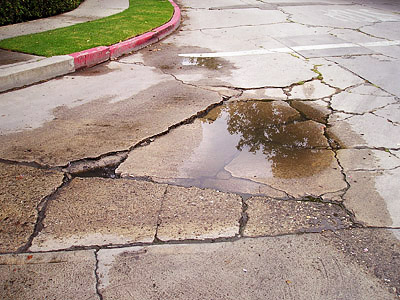 Great for ducks, less so for bikes. 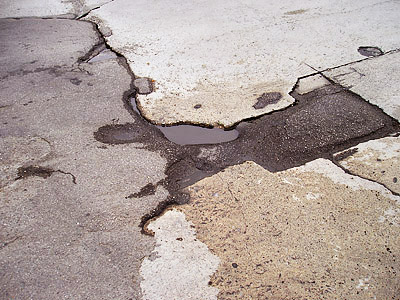 This has been "repaired" once already. 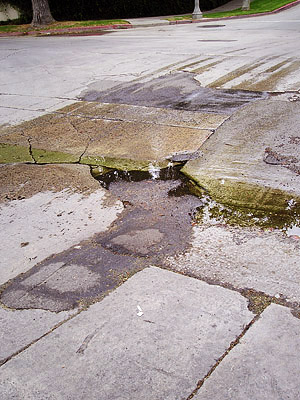 This has been "repaired" twice in the last two years! 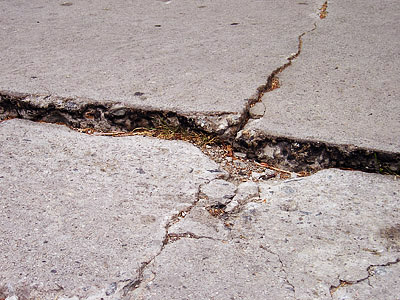 One of dozens of tire traps. 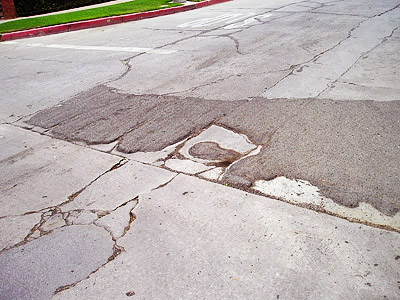 One of the better intersections in this mile of 4th St. 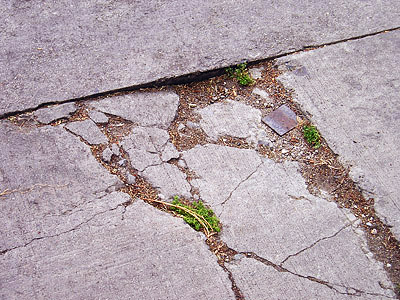 Maybe enough plant life growing there will fill it in. 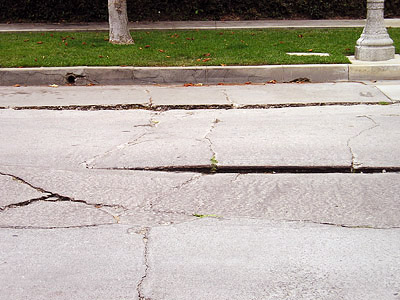 Ridges half the height of the curb--wonderful at night! 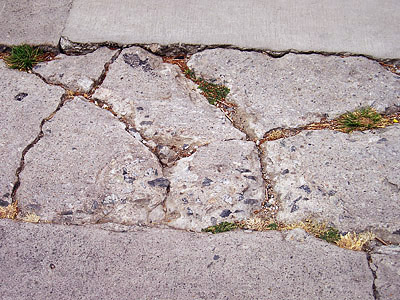 A mere rumble strip in comparison. 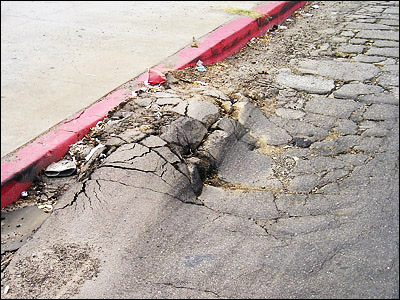 Lagniappe: once you leave Fourth Street, you might, if you're lucky, get to meet this monster on Virgil!