Derek Z. over on the iBOB list, opined that "I feel folks are in a rush to get anywhere - shopping (big one for sure), to buy gas or a gallon of milk...and especially to get home." That's certainly part of it....

"Hurry" has become a sacrament for Americans. As has total and institutionalized self-centeredness. Part A makes you feel important; part B lets you feel that everyone else is inferior.

And of course they want to get home and out of their cars. Unless you're in a sports car on a winding, empty road, driving is a complete bore. You're strapped in a box and looking at the world with blinders on, can't hear, are going too fast to appreciate the life around you (if there were any; a freeway is as sterile an environment as a prison), stopping to get out is cumbersome, and trying to keep going is frustrating. The other drivers out there are "in your way," but you know deep inside that you're in someone else's way.

They dump on cyclists because cyclists seem less powerful, in part, but more, I think, because cyclists are freer (Yes, they hate our freedom!), and mostly because we're identifiably different--the same impulse that underlies racial and ethnic prejudice. It isn't logical, of course--if driving were logical, we'd take the $60 billion US governments spend subsidizing driving and put it towards mass transit, which is not only more efficient but less work for the traveler.

The underfunding of mass transit leads us to another aspect of driving, that of purposely (if perhaps unconsciously) undermining community in the US. We have spent seventy years and billions upon billions of tax dollars ensuring that people not only travel isolated from each other in little tin boxes (as opposed to big ones such as buses and trains, where I can almost always find an interesting conversation if I want one), but also that they live in suburbs, well-separated from each other, in pseudo-neighborhoods where there are no public spaces (except streets, where you're expected to drive, not bike or walk or play or visit), and shop in big box stores distant from their homes where they won't meet neighbors and establish relationships wherethrough unmediated discourse can take place. ("Unmediated discourse," communication directly between two people, unvetted by corporate or government media.)

The internet has made a dent in this, but the pinstripes are trying to turn it into a big mall; there is a growing countermovement trying to keep the Internet a free and open forum. Search (on Google or Alta Vista or any other search engine--did you know there is more than one?) the terms "net neutrality"--important to know about if you value discussions such as we often have on boards and blogs and forums all over the 'Net.

Cyclists are seen, often rightly, as rebels of the countercultural sort (more like hippies than Wild Ones), whose simple existence questions the driver's acceptance of a social order that trammels his life in steel and disinformation.

Nevertheless, I see a lot of drivers who have become cyclists at least part time here in LA, which is a difficult place in which to ride transportationally. A significant number of those are taking on a more egalitarian worldview, helped along by places, like Orange 20 (one of our dealers), that specifically promote "urban egalitarian cycling." (In fact, a number of cyclists I know work in co-operative, non-hierarchical organizations.)

Using bikes to travel means at the least that you don't spend as much on fuel and cars, and can mean that you opt out of the rabid consumerism and Fox News worldview that are meant to define American culture and justify one's serf-like position in it. The false sense of power driving gives one is recompense for a trammeled and limited lifestyle.

So to most drivers, and especially to urban/suburban SUV drivers, a cyclist is more a rebuke than an impediment. I often (almost every day) am passed and repassed by hurrying drivers with a great roar of engine and tires, only to catch up with them repeatedly as they get stuck behind masses of cars just like theirs. Sometimes someone will roar around me to gain twenty feet on my position at time of pass, and end up behind a long line of cars waiting at a light, which I then pass. A light that was brightly and visibly red when he initiated his pass to gain that twenty feet.

This is not rational behavior. Basically, drivers in the US induce a voluntary insanity to justify driving everywhere all the time. They don't really need to go fast, they don't really need to carry much 99% of the time. They need to feel powerful, and to feel accepted by a culture that overwhelms them. The car is sold to them as the means to these sensations. It fails, and they are frustrated. Yet they try the same thing again and again, climbing into the cab and getting stuck in traffic. The magic always fails, as magic always does. And you gotta blame somebody for breaking the spell.

I suggest you read Andre Gorz's brilliant analysis of car culture, The Social Ideology of the Motorcar.

And there's a whole page of links to articles by me and others on this matter, including everything from rants to descriptions of community-friendly community design by prominent architects, in Bicycle Fixation's Sustainability index.


Friday, December 21st
Bicycle Fixation Knickers and the Solar Gondola
Reno Tondelli of Venice Beach runs a solar-assisted trishaw service in the Santa Monica area and recently entered a video explaining the genesis of his new trade into a "contest that is searching for people who have manufactured something that uses pedal power to help propel our world into a more humane and sustainable possibility."

See the rig (and our knickers!) in action here: You Tube: Solar Gondola

See all the contest entries here: You Tube: Innovate or Die

Reno's a great guy; you can usually meet him at the Santa Monica Critical mass ride. And pedicabs are a great solution for carfree short-distance taxi service in commercial, recreational, and dense residential areas.

Wednesday, December 19th
English Weather
I had my first real rain ride of the season today--though I'd ridden in the a couple of times rain a few weeks ago, it was not very far; today I went out to South Pasadena to meet with Velo-Retro's Chuck Schmidt, jawbone a while, and pick up some T-shirts he'd printed up for us, and then later to meet (at Buster's Coffee, Chuck's favorite South Pas hangout) Claude Willey, an artist and analyst of matters sustainable who also has one of the longer bike commutes around.

It was misting when I left, which I never care for, as I wear spectacles, and while rain falls, and so a visor is able to keep it off my lenses, mist floats, and no visor works well at all. But off I went, and by the time I got to Silverlake it was raining hard enough to switch to my rain cape, and to keep most of the rain off my glasses.

Much of the route I ride to south Pas is, to put it mildly, charmless, consisting of bad roads and worse buildings, cinderblock and stucco predominating, with gray, beige, and dingy white the favorite colors, but rain, like night, gives even the wilful banality of Los Angeles a certain vividness and feeling of life. And of course it smells good too. 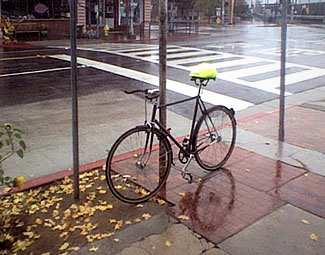 It was a nice ride to Buster's, followed by hot chocolate and conviviality, a genuine pleasure, heightened by the view of my Bottecchia, the Bambina, waiting outside for me, with my helmet shielding her saddle from the rain.

finally, around two o' clock, I saddled up and headed to downtown and the garment district to check up on hats and a couple of other projects.

Downtown was spectacular in the rain. In part this was because I had arrived there just as a particularly brooding mass of cloud arranged itself behind the rooftops and skyscrapers, but partly it was because the twin rows of tall Art Deco buildings blocked what little light sifted through the clouds and gave the wet, bright streets an aspect of dusk at half past two. Add to that the neon lights of Broadway, the jagged reflections of head and tail lamps in the lightly-spattering rain, and the cool air wet and sweet in the lungs, and you had a vivid sensual gestalt.... One of my most pleasurable trips downtown, even if the factory was running late with everything!

And it pleases me to report that even here, in LA, at Ground Zero of Carmageddon, land where they grow excuses to drive for the stupidest reasons, I saw lots and lots of people out on bikes in the rain! Not just messengers and delivery riders, not just the poorest of the poor who can afford no other vehicle, but working and middle class folks out getting somewhere on their bikes.

So it was a day that gave me hope as well as pleasure.

A good round day. Thirty-eight miles in the rain, and all of them good miles in many ways.

Yesterday I saw numerous Dutch-style city bikes, mostly by Electra, being tooled around by a variety of folks in my neighborhood, including twentysomething girls, thirtysomething men, and a couple of women of a certain age, many with market bags hanging off the handlebars. Mostly people who did not have the aura of cycling enthusiasts, but just regular types who have broken the conceptual trammels of the American Wetdream and made some rational choices.

The bikes are heavy and overstyled and wouldn't be comfortable for a 40-mile ride--but they're perfect for shopping, visiting, bar-crawling, or heading to a local bistro or theater, and I was happy to see them lumbering about, often in pairs.

I won't trade in my lugged fixies by any means, but I'm glad to have the company of other riders when I'm out on my own errands, and these folks bode well for our future as a culture.

Whether these attempts succeed as either bike parking or as art we'll leave to our readers to decide. In any case, at their worst (one was already broken when we photographed it), they still represent a thousand steps forward from the situation of the all-too-recent past, and, supplemented by thousands of more ordinary bike racks that the city has installed in every neighborhood, they officially welcome the World's Most Efficient Machine to the city that is Ground Zero of Carmageddon. That's got to be something good!

Go to The Artful Bike Racks of Los Angeles.

We had searched and we had searched, and we couldn't find satisfactory socks to wear with our Classic Wool or Hemp City knickers, so we had some made to our own specifications. These comfortable, durable wool-blend socks come over the knee to assure complete coverage for cold weather or fussy relatives; we also wear them in summer to keep the whole lower leg safe from sunburn. You can even (if you're under six feet tall) use them as knee-warmers with racing tights. Or fold the top of the cuff down to make them kilt socks!

Dark Charcoal available in S/M and L/XL; Olive in S/M only. S/M fits US men's sizes 5 to 9; L/XL fits 9 to 13. They will actually go a little larger comfortably.