At Orange 20, I look at the curious phenomenon of German luxury car makers offering branded bicycles, and wondering whether they're just pandering...or preparing for a future. And if the latter, Are We Ready Yet over here in the US?

And at Flying Pigeon LA, I go over the GRID project (which I am involved in) and What's in It for Us as cyclists.


Monday, November 26th
The Bicycle Fixation 2013 Calendar!
We've taken a few of our favorite urban cycling photos of the last few years and used Lulu.com to make them available in a handsome calendar! Hihg-resolution images of streetriders everywhere from Los Angeles to Osaka will bring velocipedal pleasure to your life month after month, so take a look--the catalogue page lets you preview the images. 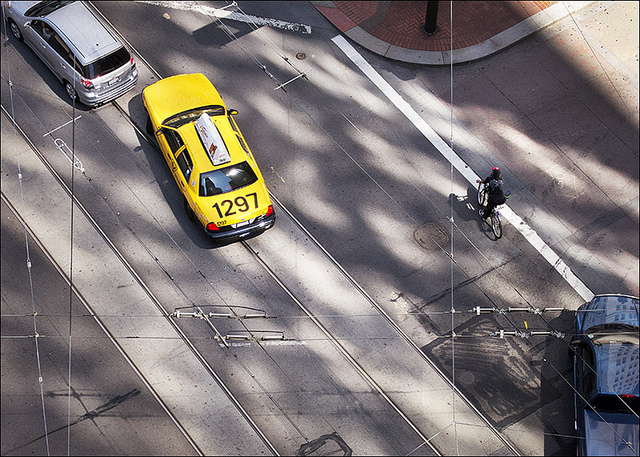 And at Flying Pigeon LA, I look at LA's Metro Getting It Right with easy-boarding people- and bike-friendly trains.

Happy Thanksgiving to my US readers!

ARTCRANK DEBUTS IN LA WITH BIKES, ART AND BEER AT ORANGE 20

ARTCRANK, billed as "A poster party for bike people," will make its long awaited Los Angeles debut at the newly-minted Best Bike Shop in L.A. — Orange 20 Bikes on Saturday, Dec. 8, 2012.

ARTCRANK LAX will feature hand-made, bike-inspired posters created by 31 artists from the City of Angels. Admission is free, and limited edition, signed and numbered copies of all posters will be available for $40 each.

Where you find bikes, you're sure to find beer, and ARTCRANK Los Angeles is no exception. At the show, a selection of craft beers by Widmer Brothers Brewing will be available in exclusive ARTCRANK pint glasses, with proceeds going to L.A. Streetsblog, a nonprofit news organization covering the movement to transform transportation in Los Angeles by improving conditions for pedestrians, cyclists, and transit riders.

ARTCRANK rolls into Los Angeles at a time when cycling has become increasingly visible in the city. In the past year, LA has added over 60 miles of new bike lanes, and a pair of CicLAvia "open streets" bike festivals attracted crowds of over 200,000.

"Los Angeles has always been a beacon for creative people," said ARTCRANK founder Charles Youel. "But even two years ago, nobody would've thought of it as a big bike town. So it's exciting for ARTCRANK to hold our first show here at a time when more people than ever are taking to the streets on bikes, and the city is becoming more bike friendly. We can't wait to see how that comes through in the posters that our L.A. artists are creating for the show."

About ARTCRANK
ARTCRANK is a show of bicycle-inspired poster artwork that introduces people to talented local artists and sends them home with affordable, original works of art. Since its 2007 debut in Minneapolis, ARTCRANK has held shows in bike-friendly cities in the US and UK, including Portland, San Francisco, Austin, New York, Denver and London. In 2012, we held our second show at Interbike, a cycling industry showcase that attracts attendees from around the world. ARTCRANK uses creativity to change how people think about bicycles and grow the cycling community. Find out more about ARTCRANK at artcrank.com.

Wednesday, November 14th
Offsite Blogging XC
In this ninetieth announcement of my invasion of other people's blogs, let me direct you to:

Orange 20, where I wonder where the Bike Parking went at otherwise-progressive Santa Monica's Bergamot Station, which might better be called "Bergamot Stationary".

And to Flying Pigeon LA, where I celebrate some Happy Days of bicycling in South Pasadena with a little photo-essay.

Thursday, November 8th
Essential
I'm hoping it's a sign that bicycles are becoming mainstream icons of urbanity, this growing ubiquity of the velocipede in advertising and promotion, even of things that have no direct connection to transportation or recreation.

I've seen dozens of examples over the past two years—in the clothing and home furnishing catalogues that my wife Gina receives in nearly every day's mail delivery, in ads in her cooking magazines, in shop display windows everywhere from Hollywood to Beverly Hills, even in the Los Angeles Business Journal in a series of three full-page ads for Intuit, proferring services to small businesses; every image had a bike parked next to the (imaginary) brick-and-mortar, as in the picture below: 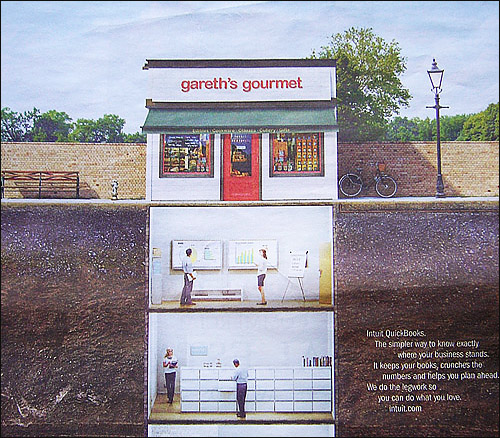 Just two days ago, Gina snapped this photo in the men's section of the Banana Republic store in The Grove, currently the upscale/hip LA shopping place (which is set up as a mock Main Street, complete with tram, though with far more security than any Main Street in any real town outside of Kabul): 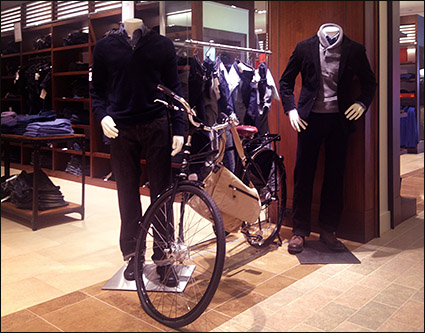 And yesterday, as I was walking down Wilshire, I saw this delightful superimposition of the word "essential" over the gratuitous image of a city bike in a poster touting an optometrist's fancy eyeglasses: 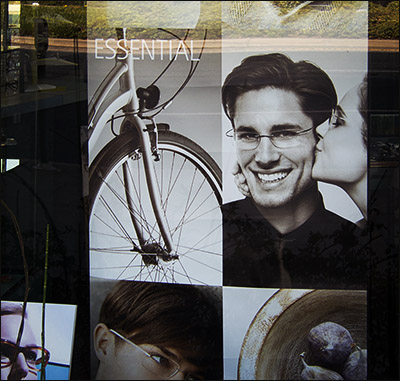 I couldn't agree more: the bike is essential to the new urban experience, and if you want to be among the hip, the chic, the happy, and the forward-looking, you really need one.

At Orange 20, I pontificate on the Gut Feelings that so many use to justify opposing bike infrastructure...and just how unfounded those feeling usually are.

And at Flying Pigeon LA I wonder whether, After the Deluge of election ads, we might not get back to the daily work of building—yes—bicycle infrastructure, using South Pasadena, one of my favorite local small towns, as a case in point.

Inspired by the changing of the seasons and the end of Daylight Savings time, the Los Angeles County Bicycle Coalition (LACBC) is proud to announce the launch of "Operation Firefly," a bicycle light distribution and safety education program in an effort to ensure Angelenos riding bicycles at night are seen by motorists and other users of the road.

LACBC's "Team Firefly" volunteers will be handing out front and rear lights during night-time street distributions all over Los Angeles. LACBC's first street distribution will take place during the week following the November 4th time change. "Our goal is to seek out people riding without lights for various reasons, especially riders who may not have the means or time to acquire lights on their own," said Education Director Colin Bogart. LACBC has invested in a few hundred light sets and intends to continue weekly street distributions until all the lights are gone.

Following the November 4th time change, more bicyclists will be riding the streets after the sun has gone down. Legally, bicyclists are required to use a front white light with side, rear, and pedal reflectors (CVC 21201). Jennifer Klausner, the nonprofit's Executive Director said, "Many bicyclists don't know this and frequently ride at night without the required lights and reflectors. This can lead to citations from police, but more importantly, riding at night without lights and reflectors is not safe."

In addition to front and rear lights, LACBC will be distributing Operation Firefly spoke cards in English and Spanish. The spoke cards will provide a summary of the California Vehicle Code requirements while riding at night along with additional tips for enhanced visibility when it's dark. The spoke cards will be distributed with the lights, to LACBC members, at events, through local bike shops, and through partner organizations.

Anyone can support "Operation Firefly" by making a tax-deductible donation or by purchasing a set of lights from LACBC for $20. "For every set we sell," added Colin Bogart, "we can give away another set! If we receive enough donations or sell enough light sets, we can keep 'Operation Firefly' going all winter, and possibly all year."

For more information or to make a donation/purchase lights, contact LACBC at (213) 629-2142, visit our website at www.la-bike.org, or email Colin Bogart at colin@la-bike.org