On Orange 20's blog, I report on a group ride supporting bike lanes on North Hollywood's Lankershim Boulevard, where ever-diligent bikeways impediment Tom LaBonge is leading the charge to a car dominated past; in Missed Connections.

Meanwhile, on Flying Pigeon LA's blog, I report on a new bike corral on Glendale Boulevard in aTwater—an effort that might be rendered worthless if, in another LaBonge-supported effort, the bridge feeding into that street is turned into a howling speedway. You've got to wonder Just What Is Going On Here?


Saturday, October 26th
Going Fourth
Just a quick note…I indulged in a nice little evening ride last night, going to the "Ghost Bikes of LA" exhibit at Orange 20 Bikes' Red#5Yellow#7 Gallery. I love riding at night, especially now that I have a dyno hub and bright beautiful Busch & Müller lamp on the Bottecchia, but being generally an early-morning sort of guy, I don't do it much unless there's an meeting, dinner, or event.

So last night was a treat. The exhibit was well-done (except for the Spanish translations), and I met a number of folks I knew there, but—better than that, in a way—the ride through a soft autumn night was transcendent. I'd say half of my route runs through gritty, worn-down neighborhoods that are somewhere between shabby and banal in daylight, yet at night they are sonatas of shadow and lamplight, and quiet voices murmur from porch steps as residents themselves respond to the calm of first dark.

The last part of the ride, heading homewards, follows Fourth Street through upscale Hancock Park, where what is often pretentious in the daytime is symphonic in the darkness.

And I couldn't help noticing that even at that relatively late hour, there were more cyclists than drivers on Fourth Street, which, despite the malign neglect of its council member, remains a favored east-west route through Midtown for LA's pedalers.


Thursday, October 24th
Offsite Blogging CXL
A couple of more rambunctious than usual posts this week…check out Accidents Happen on Orange 20s site (they don't); and take a look at With Friends Like These… at Flying Pigeon LA. 'Nuff said!

Tuesday, October 22nd
Two in Two Days
This is getting a bit wearisome: today was the second time in two days that I was almost hit by a scofflaw driver. Since I have almost no close calls, it's particularly disquieting. Made worse by my sense that I was partly at fault—if only for trusting people too much.

That's something you'd better not get into the habit of doing on the streets of LA.

Yesterday I was crossing a major intersection with a green light, though the "Don't walk" sign was flashing at the crosswalk. As I approached the intersection I saw a red car approaching in the opposing left turn lane, and I said to myself, That SOB looks like he might not stop for me. I rang my bell to get his attention, and kept on going.

So did he. Even when he appeared to be looking right at me. Eventually I decided it was time to take evasive action, which I did, though he did come within five feet of me as he swung through the turn. It was close enough that a woman in a car waiting at the cross street screamed.

Then today I was in the harbor area of Long Beach, when I went through an intersection and turned to go left—making the supposedly-safer box turn. There was a road crew working on the street I had just crossed, which may have blocked sight lines somewhat. As I reached the far corner, the light turned green in the direction I wanted to go in. I waited a second—I was stopped anyway—and pedaled on.

Only to find a black car approaching on my left, running—albeit slowly—the red light. I was moving too slowly myself to dodge, but the driver was more on the ball than Red Car Guy, and he stopped.

It would have been at least a broken leg if he hadn't.

I think I need to refurbish my mistruster. Two in two days is three too many.


Wednesday, October 16th
Offsite Blogging CXXXIX
More from Portland this week, as on Orange 20's site I explore how It's All About Connections when you're building a bike network, while at Flying Pigeon LA I recount how Portland's bike corral program is Racking Up Successes for both residents and retailers.

Now, how to get my own Los Angeles to do something even half as good?

Thursday, October 10th
Offsite Blogging CXXXVIII
Two posts on Portland this week, since Gina and I were visiting there with our bikes.

The first, on Orange 20 Bikes, revels in the feeling of a CicLAvia Every Day…Sort Of that someone accustomed to LA can get there.

The second, on Flying Pigeon LA, examines how Cheap and Easy it has been to make Portland bike-friendly, and wonders why LA can't do it too.

Friday, October 4th
Back in Portland
We're back in Portland, the first time since 2010 for me, when I wrote up my impressions of the city.

As before, we are walking and pedaling all over the city. This time I've gone farther afield, taking pictures of a Portland no one celebrates, but which is a vital and very different city from the one that's always in the news.

I will write an article and post it with photos after we get back, but for now I'll leave you with a taste of what Portland is famous for: an accommodation of bicyclists that has been of immeasurable benefit to the city's street life and retail prosperity: a photo of the bike corral in front of the Ace Hotel, around the corner from where we are staying: 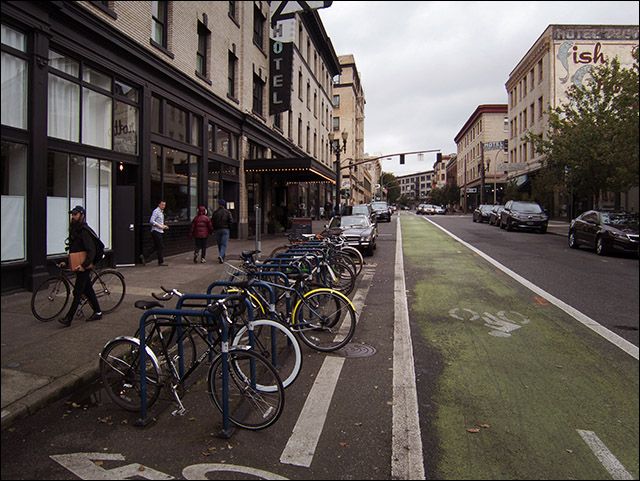 The city has nearly a hundred bike corrals in place so far, and there's a waiting list for merchants who desperately want one in front of their own establishments.

If you want to see a few other photos, go to my Flickr set. I'll be adding photos irregularly over the next couple of days.

Wednesday, October 2nd
Offsite Blogging CXXXVI
It's all about the Glendale/Hyperion bridge this week a vital connection between Atwater and Silver Lake, which the powers-that-be are proposing to turn in to a mini-freeway that would endanger cyclists and walkers—and drivers too for that matter—and dump speeding traffic into two presently walkable shopping streets surrounded by quiet residential neighborhoods.

Learn more at Orange 20 Bikes, in Over the River and Into a Mess, and at Flying Pigeon LA in Is the City Destroying a Bridge in Order to Save It?