And on Orange 20's blog I cover another lost opportunity in Beverly Hills when I review a Paradise Ignored.


Wednesday, August 24th
Offsite Blogging XXVII
This week I celebrate a small victory in the progress of the velorution in Los Angeles, with two takes on an astounding (for LA) occurrence: not only did we get a road diet on 7th Street, but we got it a month ahead of schedule--and the bike lanes are even mostly out of the door zone!

See The Ship Is Turning at Flying Pigeon LA, and look at Not What We Expected at Orange 20.
Good news for a change!


The Return of the Troll Hole 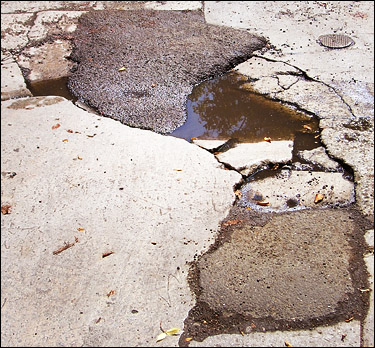 Click for larger image
While, thanks in part to my efforts in tracking down the source, LA's infamous Hudson River no longer flows 365/24/7 as it used to. This means that the crappy coldpatch jobs the Bureau of street Services typically applies to pothole repairs now lasts several month, rather than a few weeks as they did here before, when the water constantly undermined the road.

Nevertheless, the patch jobs are crappy--in part because the city never removes the broken concrete slabs that lie in the depths of the damage, and so the car traffic beats it up pretty badly--and so 4th Street's famous Troll Hole has finally returned.

I dropped a dime on it as usual. The city does indeed respond to requests sent in through their online form, though not always instantly. (You can turn in your favorite pothole as well, at the BSS Service Request page.) And since as of yesterday the hole had not been patched, I just wanted to let the numerous Los Angeles commuters who bicycle 4th Street to watch out at Hudson, for thought he river no longer flows, the troll is waiting for you once again.

With luck Street Services will have it patched within a few days, but until then, be careful.

Update:
As of 26 August 2011, the "Troll Hole" has been patched, not too badly either. Enjoy it while you can!


Thursday, August 18th
Offsite Blogging XXVI
This week on Orange 20's blog I talk about the beginnings of change in LA's administration and how we need to let go of our longstanding (thanks to earlier administrations) outsider habits and learn how to take advantage of the city's nascent and still fragile openness: Inside Outside.

And Flying Pigeon LA sees me spouting off about Beverly Hills and how it is poised to pass up A Golden Opportunity to boost business and give itself a real town square with a little bit of bike love.

Monday, August 15th
Santa Monica Sunday
I rolled through LA's seaside sister (one of them, at least), Santa Monica, yesterday as I wandered the Westside with no particular goal in mind, it being Sunday. It's always a pleasure, as Santa Monica loves bikes--that is, both Santa Monica the city, and Santa Monica the population. I never fail to see lots of folks riding down Main Street to the farmers' market, the restaurants, and the shops whenever I'm down there--even on rainy days.

Yesterday was overcast and cool, though dry, and loads of regular folks were out on their velos, along with a smattering of roadies. I took a few pictures, so here they are: 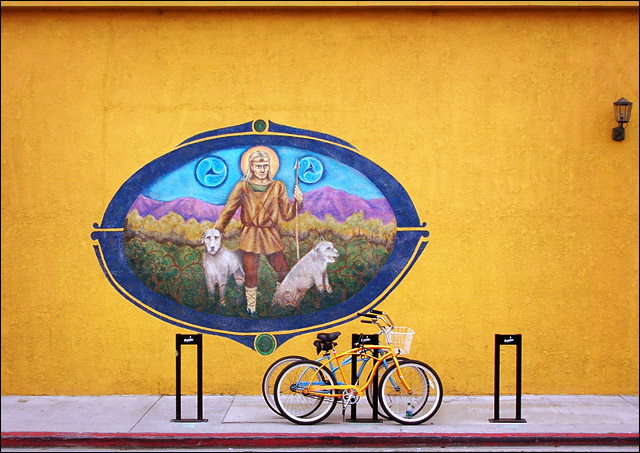 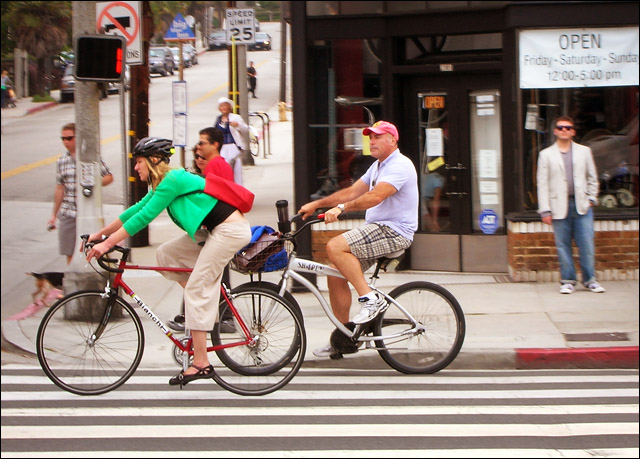 Regular clothes are in style no matter what you ride 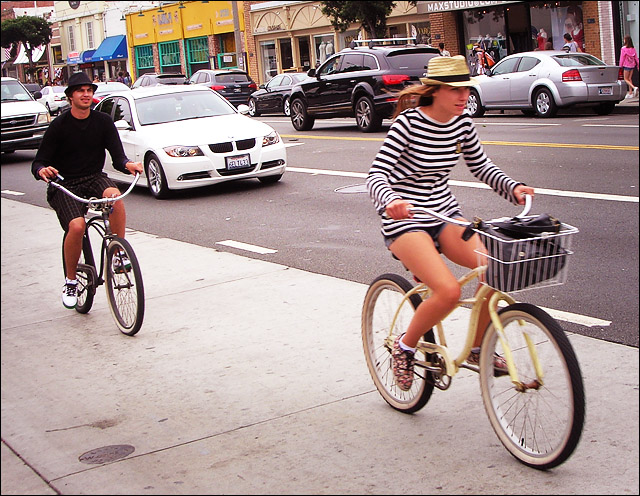 So are hats, apparently 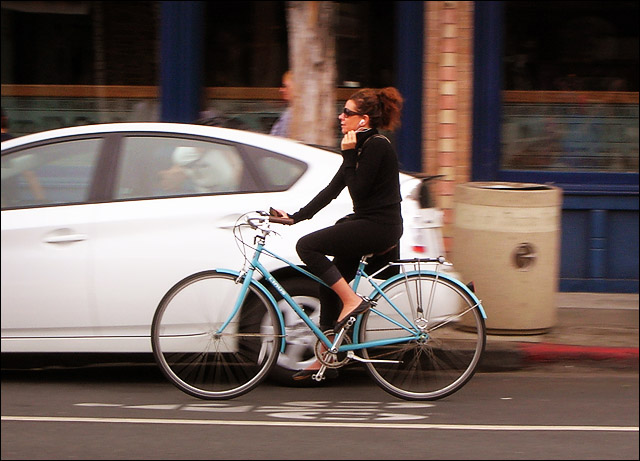 As is a certain air of insouciance.... 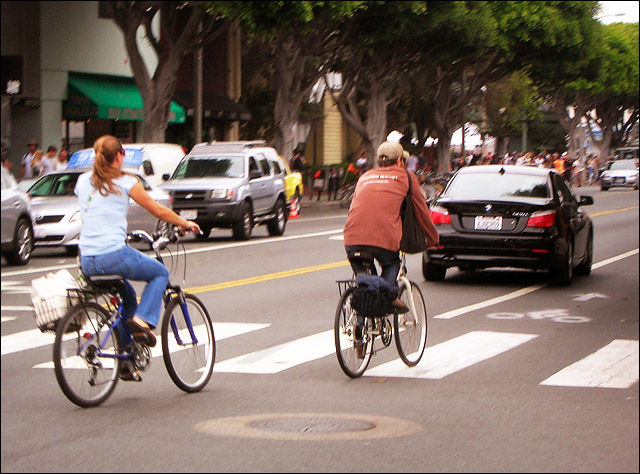 Baskets, bags, and backpacks abounded, and were often well-filled 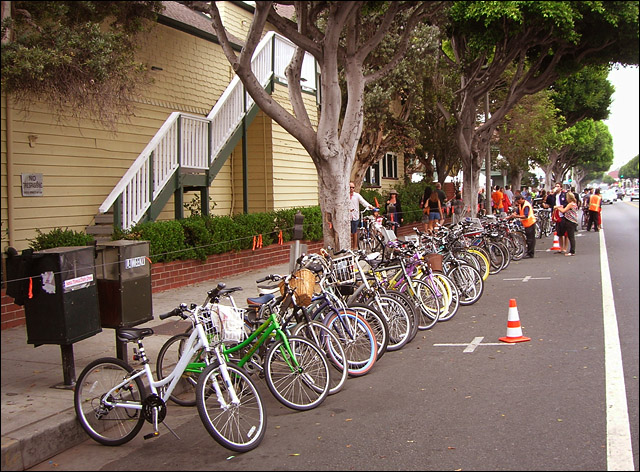 And of course the Sunday bike valet...how much space would it take to park this many cars?

Santa Monica and Long Beach, farther down the coast, are now competing with each other for the crown of SoCal's best biking city, with Los Angeles far behind. Though we are getting our Seventh Street road diet and bike lanes ahead of schedule, it seems! Read about that on Streetsblog and the LADOT Bike blog..

Saturday, August 13th
A Bit of Needling
Just letting you know that we have fired up the factory for another run of Classic Wool Knickers, which should be done in about two weeks.

The primary color will be everybody's favorite, charcoal, though this time in a wool flannel rather than gabardine. The flannel is a little softer than the gab, but also a little thicker, so durability should be about equal, while they will bring a little more warmth to your legs for fall, winter, and early spring riding. These will have our traditional burdungy gusset at the cuff.

The secondary color will be olive brown, with a black gusset, in our usual mid-weight gabardine. We will have very few of these, and not in all sizes, so if olive is your choice, act fast!

Of course we still have the Classics in midnight as well as City Knickers v2.0 in true black, so visit our shopping cart to grab a pair if you fancy those colors. They are beginning to run out.

At Orange 20, I wonder what ever happened to the bike corral that seemed so certain a few months ago. Perhaps it's true that, to paraphrase Bob Dylan, Everybody Must Get Stonewalled.

And over at Flying Pigeon LA, I look back at ourselves in the bicycle advocate world, and wonder Hey, Where'd You Go? when it was time to get real (if only a little bit).

Monday, August 8th
That's More Like It!
We stopped by local shopping mall The Grove last Saturday evening, and much to our delight we found the bike racks in the parking structure absolutely jam-packed with bicycles! So I had Gina put her iPhone camera to work, to see what we could do in the semi-darkness of the concrete cave. 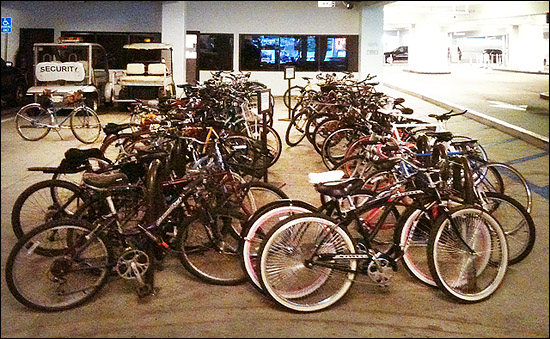 Imagine how much smaller they could have made this giant garage if they'd though just a bit progressively and put in far more bike racks? (They have added more rack space over the years.) Certainly they coudl have dispensed with at least one of the eight floors. With a ton of concrete releasing a ton of CO2 into the atmosphere, and many hundreds of tons making up each floor, that alone would have made a significant difference.

Not to mention the differenced encouraging, rather than just tolerating, bicycle access would make.

I suspect they'll be having to expand bike parking yet again pretty soon.

In fact, we could not find spots for our bikes, and went over to the adjacent Farmers Market, which recently installed a bike corral itself. We passed several more cyclists pedaling toward the parking structure as we rode away. Did they stop and shop, or did they also move on to someplace more accommodating?

Thursday, August 4th
Gertrude Stein Was Wrong
Just this morning, my friend and colleague Chris Kidd sent me a link to an enlightening report hot off the virtual presses from the "Bicycle & Pedestrian Facilities Progam of the City of Oakland, California."

This is the town of which Gertrude Stein famously said, "There is no there there."

Apparently that has changed...especially for cyclists and other lovers of urban life.

I was both delighted and dismayed to see what that often-maligned East Bay town has been doing to make cycling feasible on their streets--something which has the happy side effect of making life feasible on the streets as well. Multiple road diets, paving repairs (paving repairs!), wayfinding signage, bike lanes, loads of bike parking...in fact, 40% more bike parking than the City of Los Angeles, which is ten times larger! Even a few "bike-friendly" traffic signals.

As of June 2011, Oakland boasts:
Meanwhile, Los Angeles, while finally making some progress, continues to come up with excuses for its persistent timidity in supporting use of the World's Most Efficient Machine as a substitute for land-hungry, tax-sucking, murderous cars on its streets.

But Oakland has all the same excuses. Our northern sister houses just under 400,000 people, with all the racial and income diversity of LA, and probably more. Here are some recent population stats:
In other words, every claimed difficulty LA faces, Oakland faces too. Oakland is a microcosm of Los Angeles, but with less money and a greater ethnic diversity (which I mention because it was once touted as an excuse for LA's doing so little to support cycling).

Someone's doing something right, and it ain't LA, not yet. Maybe we could learn a little from that gritty little town up north....

Read the report on Oakland here.

Offsite Blogging XXIV
Sorry I haven't posted much on this blog in the last few days--been busy with meetings, getting ready to make some more knickers (watch this space of an announcement!), and posting to other people's blogs, as below:

For Orange 20, I wrote on the dilemma Beverly Hills faces in getting more local shoppers to Beverly Drive, and how a A Lack of Imagination is all that's keeping them from seeing the (two-wheeled) answer to their prayers.

And over at Flying Pigeon LA, I cover the 4th Street Bicycle Boulevard, Beverly Hills again, and why people often see good things coming their way as a threat, in What's in a Name? ...And question why cities tend to celebrate road diets only when they fail....