One is from us, a little photoessay/review of a new coffeehouse that recently opened in the Bicycle Fixation neighborhood, and which is owned by cyclists and, of course, very bike-friendly. Take a look at Massimo's Mudspot right here in the 'zine.

And the other is a Dirt Rag interview with Steve Flagg, founder of Quality Bicycle Products, aka QBP. QBP is the biggest distributor of bike parts to dealers in the US, is heavily involved in environmental and cycling advocacy, and founded (among others) the Surly brand, which it still owns. Read the interview in Dirt Rag. 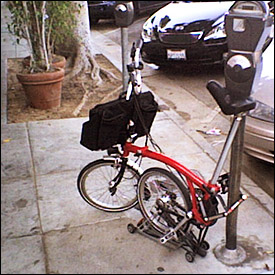 Noticed this Brompton parked in trendy Larchmont Villager this morning complete with official Brompton handlebar bag. Whole rig looks pretty handy for urban riding, even though the handlebars are (to me) hideous-looking. I was wondering why the rider folded it to park it, then realized that the luggage rack doubles as a prop stand, and what looks to be a very effective one.

Since Bromptons (and their dedicated bags) are really expensive here in the US, and since the Hancock Park area where you find Larchmont is more the domain of faux-fox-hunter types driving Jags or Range Rovers, it is heartening to see these folks, responsible for so much pollution and sprawl, orders of magnitude more per capita than the poor, taking on a different kind of responsibility, that of planetary stewardship.

I often see another Brompton, piloted by a sixtyish, well-dressed, patrician-looking gentleman in the same area, as well as an Electra Amsterdam belonging to a plump blonde matron--all good signs that some Americans, even some of the usually oblivious wealthy, are not only deciding to become good grownups at last, but also appear to be having fun doing their errands by bike.


Tuesday, August 19th
Fall Down Go Boom
Had my first Fall-Down-Go-Boom in literally decades today. (I don't count forgetting to take the foot out of the toe clip and falling while stopped....)

LA is not only a city of potholes, but a city of bad drainage, as well as a drought-stricken desert city of water wasters (especially in the tony neighborhood I was riding through).

Had to swerve around a nasty sinkhole, which sent me through a deep puddle at the apex of the turn. Said puddle had been so persistent (in August, in LA) that it was full of extremely slippery algae.

I almost saved it, but almost ain't good enough. I flung up my downhill arm to protect my head and put some linkages between ground and collarbone (just like the fixie punx do when they crash while freestyling), and escaped with two abrasions and a variety of sore muscles, some of them quite sore. Tore my brand-new handlebar tape too, but anyone who knows my bike knows that the torn spot will fade into the general shabbiness in a few short weeks.

In fact, the puddle was so slick that when I tested it with my foot (in an Adidas sport shoe with a grippy sole), it was impossible to walk across. In fact it was literally slicker than ice.

Well, it's a lesson against complacency, I suppose.

Los Angeles' Bureau of Street Services has a website where you can turn in potholes and other road hazards, and they do respond and fix them promptly, though most often rather badly. Still, it's better than leaving such problems unaddressed.

If you live in LA, and want to report a pothole or one of its kin, go to the Bureau of Street Service's Service Request page.


Saturday, August 16th
More Bikes, and More....
Did a quick hop to the dry cleaner and the library this afternoon, and was surprised not to see any other bikes at the library's rack out front...must have been the heat, though: in the shaded terrace before the library's door, I found four bikes locked to the decorative grillwork, including a new-looking Electra city bike with full chaincase, fenders, and an extremely sturdy-seeming nickel-plated luggage rack. (Looked like a Sport 3 Custom.)

This is the sort of bike one buys as an errand bike, to replace a car for local trips, and, while not expensive, it isn't all that cheap. So it bespeaks a commitment to utilitarian cycling unusual in latter-day America--but maybe not that unusual for long!

After all, utility cycling is every bit as much fun as any other sort, so it doesn't require a hair-shirt zealotry to ride your bike on errands. Just a slight change in the way you perceive yourself.

Cars are still quite obviously status symbols, but I think people are beginning to realize that fouling your world while carting yourself about in a motorized baby carriage is a sign not of high status, but low maturity.

I suspect that as more people ride, they will begin to clamor for an urban infrastructure better suited to cycling (just as the cyclists of the Good Roads Movement were responsible for the establishment of well-designed streets and highways that were then co-opted and hyperthyroidized by obsessive motorists).

This could lead to all sorts of benefits for US cities in the long run, including real neighborhoods, an intense and more-localized smaller-scale of commerce, and a freedom from the manipulations of the money-changers. All good things, I'd say.

Wednesday, August 13th
Hemp Knicker Clearance Sale!
Okay, folks we're putting the Hemp City Knickers in Olive on clearance sale, as we have decided to change the design slightly and to use a new hemp blend in the next run--one which will be a bit tougher, but which is not available in Olive.

All proceeds will go towards bringing out the new Four Season Jersey as soon as possible, and to replenish our stock of Classic Wool Knickers, so your purchases now guarantee more goodies for you in just a few weeks!

Tuesday, August 12th
NYC Discovers Carfree Streets!
From Streetfilms, a wonderful short video of the city's first carfree street closing, part of the new "Summer streets" series. All reports are that it was a huge success, and that everybody's loving it!

Friday, August 1st
Sorrow for the Tall
Bad news for all you Long Johns out there: we won't be able to make the Classic Wool Knickers in Long sizes this time--just not enough cashflow after the summer lull for a new pattern. However, we are going to aim for making a full run of longs sometime in the next few months if we can; if that works out we'll have them in stock for a good long while.

In the meantime, our apologies. And of course we'll keep you apprised of progress through this blog.

Those of you up to 6' 2" will have a fresh batch of Classic Wools (plus a surprise version) coming out in a couple of weeks, so keep and eye on us!