And at Flying Pigeon LA, I cover the efforts of a tiny minority of Hancock Park residents to ward off installation of traffic controls at two extremely busy intersections on the coming 4th Street Bicycle Boulevard. Read how Hancock Park Strikes Back!, and what you can do about it if you're an LA resident.

Two exclamation-pointed titles! I told you it had been a busy bike news week....


Friday, July 22nd
And Some "Cycle Chic" on the Side....
Here's a bit of circumstantial "cycle chic" from LA: Gina coming home from a bike/bus trip to a business meeting in Century City. A quick pedal to the Third Street Farmers Market to park the bike and catch the bus--which also gave her the chance pick up some groceries on the way back. Saved her a frustrating drive and expensive parking. 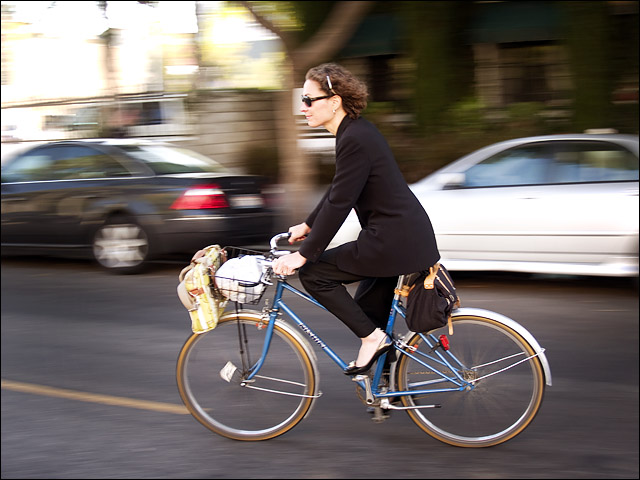 Note how her Po Campo briefcase/pannier (bought at Flying Pigeon LA, one of Bicycle Fixation's retailers and the site of my Wednesday LA bike news blogging) fit handily onto the front of her basket using the clever rack mount straps! 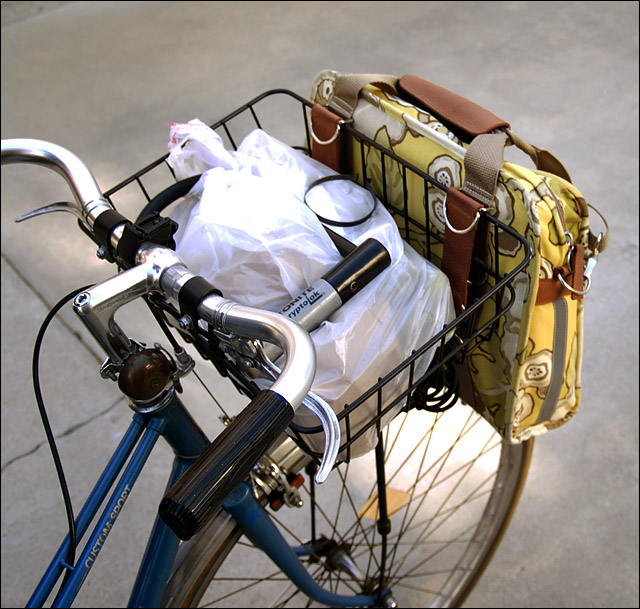 Other cycling high-technology employed for this "difficult" (to the US mindset) multi-modal trip in car-centric LA: one spring-steel British-style pants clip, purchased for about a dollar around twenty years ago.

At Orange 20, I gush over how LA's little southern neighbor Long Beach Gets It when it comes to supporting cyclists.

And Flying Pigeon LA presents my opinions on the MIA "Carmageddon" and the cyclists' anti-harassment ordinance in Carmageddon--Not!.

Monday, July 18th
Build It, and They Do Come!
A while ago I posted an entry on this blog celebrating the arrival of new bike racks on the Miracle Mile, the stretch of Wilshire where we live. This was in large part in response to suggestions I made to the LADOT (that is, I nagged them)--and they responded admirably, putting in more racks than I had suggested.

The next question was, Would people actually use the racks? This bit of road is not very bike-friendly, suffering from heavy traffic (it's one of the busiest roadways in the US) and an often horrible road surface.

But it turns out that the racks are hugely popular!

Here's a photo the racks in front of the Museum Square building on a typical day: 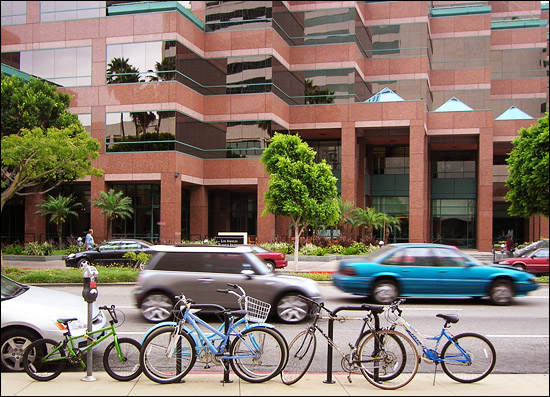 What you don't see are the numerous other bikes locked to parking meters up and down the street.

Across the road from this rack, in the stepped brown edifice you see in the background, are four more wave racks for building customers and employees, heavily used (and supplemented by more racks in the parking structure).

Down at the corner are LADOT markings showing where two more racks will go, in front of the new upscale burger joint--and around the corner from that are what seem to be privately-installed racks of a design I've not seen before; here's a shot: 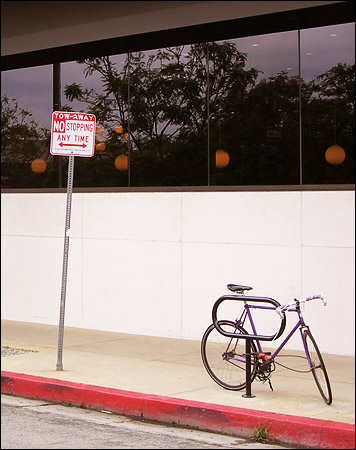 Soon we will probably have freshly-paved rush-hour bus/bike lanes passing through. That should get even more people to come here by bike.

Los Angeles is not a nimble city when it comes to changing its traffic habits, but we are making some progress after all. 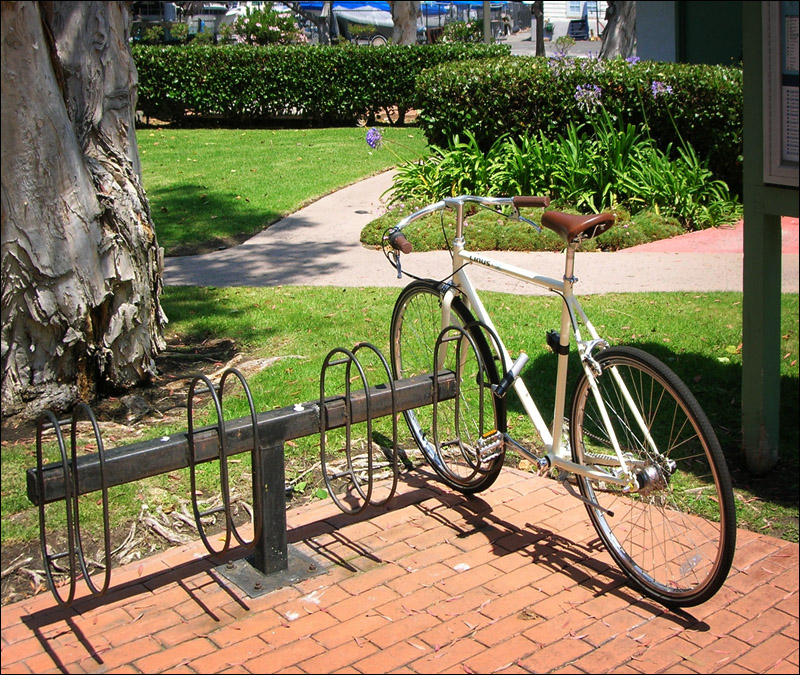 Saw this Linus Gaston in the wild last week, parked at the info booth for Marina del Rey. These are designed in LA (Venice, where they have a charming tiny showroom) and built of a mixture of high-ten and 4130 in China.

They are handsome, realitvely light, and practical, with a line of reasonable and good-looking accessories, and they are pretty cheap. Sort of the Toyota Corolla of bikes. I see loads of them around the Westside, being ridden by folks who don't look at all like "enthusiasts."

I think that between bikes like these and the similar Public bikes, and the cheap neon fixies I see downtown, we're seeing a wave of practical cycling that I suspect won't draw back as far as the '70s bike boom did--and perhaps not draw back at all.

Downtown yesterday, I saw hordes of bikes all over the streets--being ridden as transportation, not recreation; you don't do much recreational riding in downtown LA traffic. Almost all fixies or singlespeeds, with a smattering of, yes, more French & Dutch roadster knockoffs such as these Linus and Public things, and the usual cheap mountain bikes assigned to food delivery. And of course messenger bikes. This effect extended pretty far west. I see lots and lots of bikes in my neighborhood too--a pretty good mix here, with fixed/SS a plurality and more road bikes, folders for the small apartments, and even Xtracycles. I see old folks in baggy pants on bikes--sometimes even neon fixies! Lots of women too.

There's a local shop on Broadway downtown, DTLA Bikes, that has designed its own house brand of super-cheap Chinese fixies. They also carry other bikes, and maange to fill two stories of a department store. There's a locally-famous in-shop test track for trying bikes out!

Most bike shops concentrate on bikes that, if they were equivalent cars, would be Porsches or Jeep Wranglers. But I am really glad to see "Corolla equivalent" bikes out there in growing numbers!

I just wish we were making them here. But the foreign car makers have brought a lot of the production for the US market back to the US. Maybe some of these new bike companies will eventually do the same, at least for frames.

Offsite Blogging XXI
Here's a couple more posts from the local shop blogs I write for:

At Orange 20, I cover progress in a couple of smaller cities around LA that are outpacing the megalopolis in placing bicycle infrastructure: The Bigger They Are, the Slower They Move.

And at Flying Pigeon LA, I recount the doings at the latest BPIT meeting in Not Your King Arthur's Round Table.

Sunday, July 10th
"Beyond Safety in Numbers"
Just came across this synopsis of a study indicating that the "safety in numbers" effect really exists, and exploring hwo to achieve it.

"Safety in numbers" is the name given to the concept that getting large numbers of cyclists onto the road systems improves safety not only for cyclists, but for all road users, including drivers. This effect has been observed not only in Europe but in cities suhc as New York where traffic injuries and fatalities have gone down in parts of town that have received advanced cycling infrastructure.

In fact, cities with high usage of bicycles for transportation, such as Davis, see lower absolute as well as per-capita traffic injuries and deaths than do cities of comparable size with low cycling mode share.

Read the synopsis at Planetizen: Beyond Safety in Numbers: Why Bike Friendly Cities are Safer. The article includes a link to the formal report, entitled Evidence on Why Bike-FriendlyCities Are Safer for All RoadUsers.

The study explores how "safety in numbers" operates, and how to bring it about as well. Definitely required reading for anyone interested in cities, cycling, transport, or sustainability. 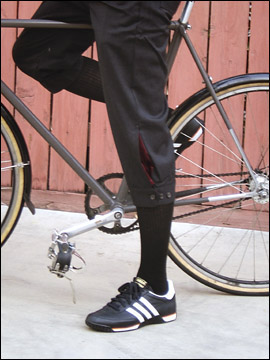 This, of course, has never been true. Until the Seventies, bike racers wore nothing but wool, and raced mostly in high summer. The British Army in North Africa wore wool gabardine (our own favorite fabric). And going further back, the Bedouin have wandered the deserts of Arabia for centuries in robes of wool.

Just last Sunday, i went (as usual for me on the first Sunday of the month) on Chuck Schmidt's Rose Bowl Ride. The ride itself is twenty-five miles long, a rolling gabfest with good friends, and comprises a couple of noticeable hills. I ride it door-to-door, adding the forty-mile round trip from my home in the Miracle Mile, which also adds several more hills of varying heights.

It is July. By the time we arrived at our lunch stop in Sierra Madre, the thermometer on the outside wall at Beantown read 100° F. It is an accurate thermometer.

I was wearing a pair of my Classic Wool Knickers and a prototype wool T-shirt (not yet in production, sorry!). I was perfectly comfortable and not very sweaty at all, considering the heat and that the last mile before the coffee stop is an unrelenting climb. I even wore our wool knicker socks (to keep the fierce sun off my shins).

So, yes, wool is excellent summer wear! And ours clothes are specifically designed for both heat and cold--we sell plenty around Southern California and even the Deep South, but also have loyal users among year-round commuters in Minnesota, Western Canada, and the Pacific Northwest. (In cold weather, a pair of merino tights under the knickers can get you through almost anything.)

Not to mention that wool is made from grass by sheep and is entirely biodegradable!

Tuesday, July 5th
Cycling Mobility June Issue
I recently received my copy of the new bike planning quarterly Cycling Mobility. I'll admit that my first interest was to see how my own article looked, especially as the photos as well as text were mine...but that done, I perused the rest of the magazine, and once again, i was impressed--almost pleasantly shocked!--at how good both the printing and the editing are.

It is one of the most visually handsome magazines I see, and the collection of articles--leaving aside my prejudice towards my own contribution--is stunning.

A partial sampling:
I haven't provided links because the magazine's online presence is limited, as it is a serious subscription-only planning journal--and the subscription is pricey.

But if you can afford it for yourself--or write it off as a journalist, planner, advocate, or whatever--you will find it well worth the money.

Sample article synopses (by the way, their blogs are free to view) at CyclingMobility.com, or subscribe to their excellent Twitter feed at @cyclingmobility

If you work in or out of government to promote practical cycling, this is a valuable resource.

And satisfying to read through too!

Note: There is an online facsimile of the print version here, but it doesn't include quite everything, and the paper version is much more satisfying.

Monday, July 4th
Offsite Blogging XX
Got another couple of posts onto my outside blogs, despite extreme heat and general grumpiness.

At Flying Pigeon LA, I ask whether You Got What it Takes to keep your bike your bike...yep, it's a look at locks.

And Orange 20 readers get to hear me ponder out loud whether, on this Peak Oil Fourth of July holiday, maybe cyclists are The Real Americans.

Yep, anywhere with a US Zip Code gets free shipping for orders over fifty bucks. (The sale ends the morning of July 5th.)

Check out the goodies on our Shopping Page.