Bicycle Fixation Weblog
Home » Archives » June 2013 » Cornered on Pico
Saturday, June 29th
Cornered on Pico
Thursday was a difficult night in Los Angeles at the corner of Pico and Ogden, site of Paper or Plastik, one of our favorite cafés.

Gina and I pedaled there to try their new dinner service (marvelous, by the way), but when we got there, the LADOT bike rack, as well as the (formerly) bolted down decorative trash can, were crumpled in a heap, the result of a car veering onto the sidewalk in what I was told was an attempt to avoid a head-on collision with a wrong-way driver.

So Gina locked her bike to a parking meter, and I chose a signpost in the red zone a few feet up the road.

While we were eating, we noticed a bobtail truck pull awkwardly in to deliver vegetables to the café. While we kept a close eye on Gina's brand-new bike, we assumed my dear Bottecchia was out of the way.

But we were wrong.

When we came out after finishing dinner and giving our compliments to Yasha and Anya, the owners, I found the Bot swung crazily around the signpost, with a dented frame tube and a taco'd wheel.

I was stunned, and Gina in tears. The bobtail driver had apparently swung the big truck's overhang well past the curb and mashed my bike. There was even a deep cut on the front Marathon tire where the undercarriage had gouged it. (But—thank you, Schwalbe!—not actually popped it.)

Anya let me put the bike in their office till the next day, when I could take it to Soundcycles two blocks away, run by my friend Wes Oishi, for evaluation and repair. 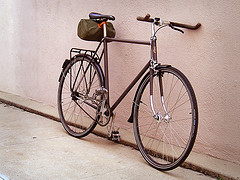 Anya also contacted the delivery crew, who immediately said they would pay for repairs.

As long as the frame is not badly compromised, repairs will be possible. Wes will let me know. A new rim and tire, and hence wheel build, are definitely needed.

This Bottecchia, humble though she may look, is the bike I've loved best in my fifty years of riding. I hope to have her back soon.

Meanwhile, I am riding the Brompton folder—a fine bike, but...just not the same.


Wednesday, June 26th
Offsite Blogging CXXII
This week's posts center, as they should, on CicLAvia, the Los Angeles version of Bogotá's famous ciclovías, started nearly forty years ago, and to which we are slowly catching up.

On Orange 20 I posted a CicLAvia Preview, while on Flying Pigeon LA I write up the Sea of Tranquillity that prevailed on a normally traffic-jammed corridor—and the waves of cash that lapped on its retail shores as a result.

Tagged as "Iconic Wilshire Boulevard," this month's event drew attention to the street's collection of classic buildings, from Art Deco to Modernist to International Style, as well as the plethora of galleries and museums clustered in the Miracle Mile, at the western terminus.

The day began soft, grey, and cool, with the sun coming out around noon but never becoming harsh, and every visage looked relaxed and happy.

Naturally, I took some pictures, though mostly I just enjoyed riding along with Gina and a few thousand others. (Looks as though the area's merchants enjoyed the day too!)

Tuesday, June 18th
Offsite Blogging CXXI
On Orange 20's blog, I explore Another Piece of the Puzzle, some preliminary bits of bike lane that suddenly showed up right in my own neighborhood.

While on Flying Pigeon LA's blog, I look at a puzzle piece we might lose as Movie Monsters Attack Spring Street's Green Bike Lane!

Monday, June 17th
The Art of CicLAvia
Los Angeles will be graced with another CicLAvia on Sunday, June 23rd, just a few days away. This one's a bit shorter, reaching from One Wilshire on the west side of Downtown to Fairfax Avenue, the western border of the Miracle Mile and, significantly, Museum Row.

Museum Row also nurtures a number of galleires, and since this edition of Cic:Avia is focussed on art and architecture along Wilshire boulevard—and since it is Bicycle Fixation's home neighborhood—we decided to see how many of the excellent private galleries would be open that Sunday, and to see whether we could persuade the ones that weren't already opening to do so. After all, it's likely that over a hundred thousand very happy people will be milling around the area looking for something to do.

And since the CicLAvia is sponsored in part by the Getty, and ends in front of the Los Angeles County Museum of Art, they will be particularly receptive to any gallery's offerings.

Well, galleries are oddly conservative businesses even when their art is radical, but we managed to convince two of the biggest to open, and a number of others either were already planning to do so, or open on Sundays as a matter of course—as does LACMA.

So here's the list of Miracle Mile art establishments that you can enjoy after riding, strolling, or skating down Wilshire from the city center—or, if you live on the west side, before you start your passage.
Ace Gallery
5514 Wilshire Blvd, at Burnside
Located in a fine old Art Deco tower, of which it occupies the entire second floor, Ace is one of the finest private galleries in Los Angeles, and is not to be missed!

Craft & Folk Art Museum
5814 Wilshire Blvd, at Curson
Long ago it incorporated a restaurant and was known as "The Egg and the Eye"; now it concentrates on vernacular art of every sort

Korean Cultural Center
5505 Wilshire Blvd, at Dunsmuir
Enter by either front or back door to view multiple exhibits detailing the art and culture of the Korean people, from ancient to contemporary

Los Angeles County Museum of Art
5905 Wilshire Blvd—you won't miss it!
A huge complex of buildings housing every sort of art imaginable, with a particularly fine collection of American art, including modern work

Petersen automotive Museum
6060 Wilshire Blvd, at Fairfax
Build up a case of cognitive dissonance by browsing displays of overwrought motorcars on a car-free day!

Wednesday, June 12th
Offsite Blogging CXX
In a change of pace, I start what I hope will be an irregular series on Orange 20's website, as I explore Crosstown Connections: Fourth Street, a flawed but still effective—and delightful!—east-west bike route through midtown.

But it's back to ranting at Flying Pigeon LA, where I follow up on progress towards bike lanes for LA's North Figueroa Street in One Small Step for a Plan.

Monday, June 10th
CicLAvia Comes to the Miracle Mile
LA's next open streets event, the June 23rd CicLAvia, will be, I believe, the first one to be centered around a theme. Called "Iconic Wilshire Boulevard," it's designed to focus attention on the architecture of the city's defining street, which runs form the heart of Downtown to the sea.

CicLAvia, however, will stop at Museum Row on the Miracle Mile—just around the corner from Bicycle Fixation HQ!

It's sponsored in part by the Getty, and so, wishing to broaden the focus to art in general, I took it upon myself to recruit neighborhood friend Dave Mann, a modern dance promoter, to make the rounds of the many galleries on the boulevard and try to persuade them to open on Sunday for the event.

Several have already responded, and we expect to hear back from the others this week, so keep an eye on this space to learn about your opportunity to turn CicLAvia into an art roll as well as a street party!

I'll list all participating galleries on this blog in a week or so.

Wednesday, June 5th
Offsite Blogging CXIX
This week's focus is on LA's Eagle Rock neighborhood, where an important meeting took place last Monday—the umpteenth meeting on the proposed road diet and bikelanes for Colorado Boulevard. On Orange 20's blog, I explained (before the meeting) why showing up and Pushing Ahead While Others Push Back is so important, while on today's Flying Pigeon LA post I report on The Lies that Failed to stop the project.

Though I fear the story may not be over yet….