Meanwhile, at Flying Pigeon LA, I note how South Pasadena, Just Over the Border from the NIMBY pit of Highland Park, is quietly installing bike infrastructure—with the avowed goal of helping its retailers!


Saturday, May 25th
Staycation
We just took a little "staycation," riding our bikes twelve miles to Playa del Rey and checking into a bed-and-breakfast right next to the Ballona Wetlands for a couple of nights—and just around the corner, as it were, from the bicycle bridge crossing Ballona Creek, which I visit more or less weekly, year in and year out.

And we took the Brompton folding bikes, even though we were riding the whole way—no trains or bus or any other conveyance to stow them into.

The picture says it all: 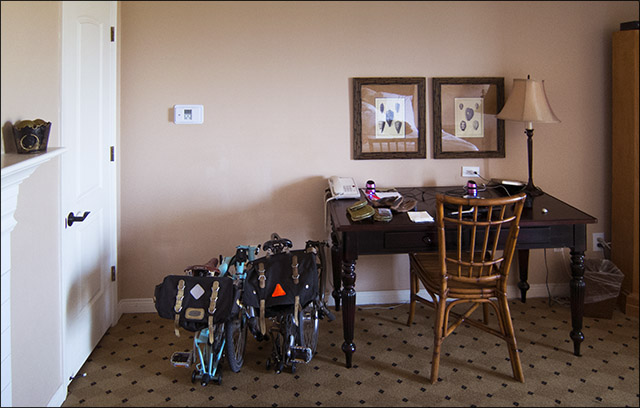 Even a fairly large hotel room is still fairly small, if one is to be realistic about it. Since the Inn at Playa del Rey, where we stayed, didn't have secure bike parking, we'd be keeping the bikes in our room, as we always have done when traveling. The Bromptons when fully folded took up almost no room at all, and were never in the way.

And they still rode well enough for our jaunt down the coast through all the south county's beach cities.


Tuesday, May 21st
Offsite Blogging CXVII
Get involved with your neighbors if you want to see a more bikeable Los Angeles! That's my message at Orange 20 in Local Motions, as I urge folks to work with, not against, their neighborhood councils.

And at Flying Pigeon LA I examine the unlikely Sprawlfest that results when LA's own transit agency does everything it can to encourage driving and discourage bicycling to light rail and subway stops….

Folderol
No picture yet—I should have some by the weekend—but I finally broke down (and went broke) and ordered a Brompton. I ordered a last year's model that my friend Josef had at his shop in Cypress Park, Flying Pigeon LA, and asked for a few modifications, such as adding dynamo lighting and lowering the gearing range slightly. Not everything's done yet—a couple of parts have not arrived—but all should be ready by Sunday.

As regular readers here may know, we borrowed Bromptons for a long train loop last year, which you can read about here, after which Gina immediately bought hers.

I have held back, strictly out of miserliness, but finally took the plunge. The bike will be ready for its close-up soon, so watch this space.

Wednesday, May 15th
Offsite Blogging CXVI
My post for Orange 20 Bikes this week looks again at the local council district election and how the candidates might treat the area's large population of cyclists in Promise and Promises, while for Flying Pigeon LA I write again on what seems to be a manufactured controversy over road diets and bike lanes in Northeast Los Angeles, asking how can it be that Neighborhood Shoppers Are "Outside Interests," but Cut-Through Drivers Are Not? 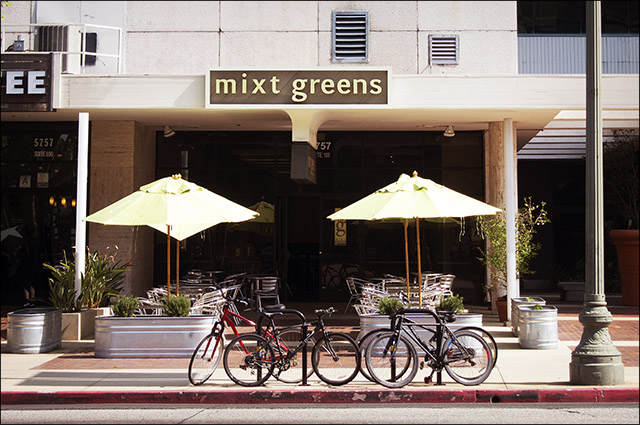 Even here on Wilshire Boulevard, a Los Angeles commercial road that is more daunting than most to bicyclists, the racks are well-used and you see cyclists everywhere. It's true, at least half of them are riding the sidewalks; Wilshire's lanes are narrow and the traffic heavy and often aggressive, but we are here.

The racks in the photo are a couple of blocks from my apartment, and are among the eighteen or so that I requested (at various times) form the LADOT. It took folks a while to find them, but now they are regularly packed with bikes. I can only imagine what it will be like when (or, I sometimes fear, if) the city puts in the combined rush hour bus/bike that have not only been long promised, but have been approved by the city council.

Meanwhile, the number of cyclists grows day by day. On Sixth street a block north, on the delightful Fourth Street connecting us to Koreatown, and even mixing it up with the mad traffic (or the pedestrian crowds) of Wilshire's Miracle Mile itself.

And next month, CicLAvia will be coming down Wilshire from downtown—ending right here in the Mile!

While at Flying Pigeon LA I try to counter a rabid disinformation campaign with some evidence that bicycles are really Wheels of Fortune for a local economy.

Wednesday, May 1st
Offsite Blogging CXIV
Over at Orange 20 Bikes, I post (under the shop's byline) on a couple of Eventful Weeks for LA cyclists, while on Flying Pigeon LA's blog, I focus on Suppressed Demand, or how our local economies are shooting themselves in the foot by opposing bicycle infrastructure.