Bicycle Fixation Weblog
Home » Archives » May 2008 » Hemp and Wool City Knickers Coming Soon!
Tuesday, May 27th
Hemp and Wool City Knickers Coming Soon!
Well, they're a bit late, as always, but we expect to replenish our supply of Hemp City Knickers by the end of May, and we'll be adding a wool gabardine version as well, which, for a few bucks more, will be more abrasion-resistant and will serve in greater extremes of temperature--hotter as well as colder, in fact.

The hemps will be in olive, as before, and the wool will come in a deep forest green, very dark and hence unlikely to show stains.

Keep your eye on this space for the announcement, or just check out the catalog next time you're here reading through our hundreds of articles...including these two new ones:

Common Sense, Liam Moriarty's musing on traffic in America, and:


Tuesday, May 20th
Blame, Bikes, & Bullshit
Recently the thread on my favorite forum wound its convolutions round the topic of Cyclists Who Behave Imperfectly and Make Us All Look Bad, and somehow came up with the knotted conclusion that motorists might just be angels if fixie punks didn't run stop signs.

Before I could finish foaming at the mouth enough to type intelligibly, Hugh Flynn came back with an intelligent and well-expressed retort, which I implored him to post on a blog so I could link to it. This he did, and now I shall.

People, in general, want everything they do to be as easy as possible, and they never want to be to blame for anything bad...ever. People who drive cars are no exception to that rule. With the The Scofflaw Cyclist straw man in place, car driving people have a target for the frustration they feel over the situation THEY have created, but for which they are completely unable to accept the blame. Most motorist frustration seems to be the result of not being able to get from point A to point B easily, and that's simply the result of traffic congestion. Traffic congestion, one might be surprised to discover, is caused by one thing and one thing only - too many cars in one place at one time. Scofflaw cyclists have nothing to do with it. While it runs counter to human nature to sit in traffic and think "I can't really get frustrated with this since I am, after all, as much to blame as every other motorist out here for this traffic jam," blaming Scofflaw Cyclists for the frustration that driving seems to engender is a bit far-fetched.

Read teh full screed in its slightly-sarcastic glory at Hugh Flynn: Cyclist Blames Self: Film at 11

Nice new blog, Hugh--keep it up, and thanks!


Sunday, May 18th
Pasadena 2nd Annual Urban Bicycle Commuter Expo
Pasadena held its second Urban Bicycle Commuter Expo in conjunction with Bike Week yesterday, and once again Bicycle Fixation was there, showing our wares and talking up bike commuting to the passersby. In spite of temperatures ranging over 100°F, there was a steady attendance all day long, with a lot of interest in our cycling clothes from both new and current bike commuters, and a lot of interest in the bikes, accessories, and other clothing offered in the rest of the booths.

The expo took place in Pasadena's One Colorado, an "internal square" on the inside of a block of shops, very nice and well-planted, and with a most convenient beer garden on the north side. There was stage for music and announcements, valet bike parking on a closed-off street, and your editor walking around with a digital camera and trying to take pictures, which efforts turned out acceptable despite the intense glare of the day: 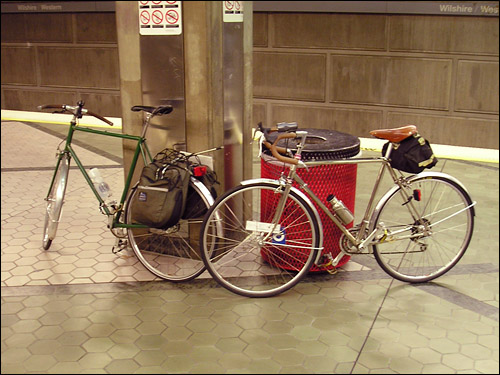 The Green Gopher, loaded down with our wares, signs, and flyers, and Vivian the Nickel-Plated Miyata, waiting for a train at Wilshire & Western. 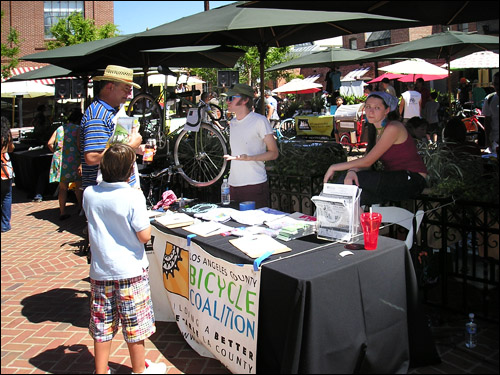 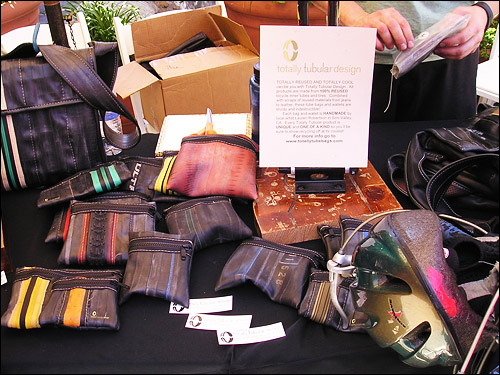 Totally Tubular Designs was there showing off their excellent bags and purses made from recycled bicycle tires and tubes. Gina bought one right away! 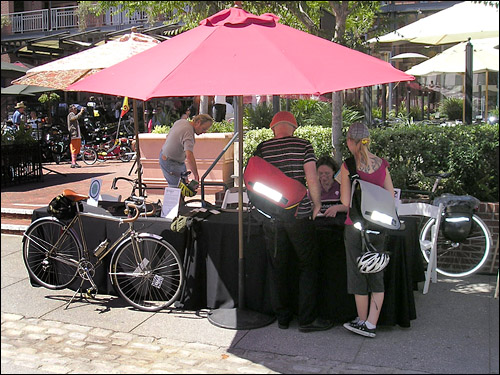 And there's Gina, hard at work in our Bicycle Fixation booth, with Vivian glittering out front to attract the passersby. 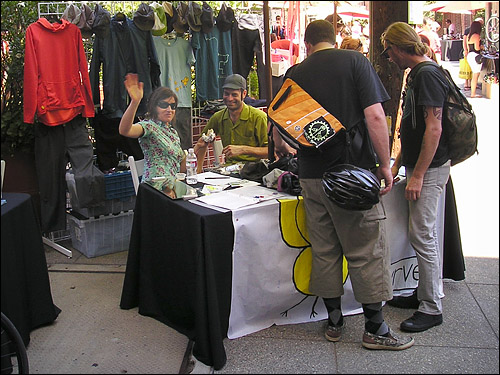 Friendly competitors Swrve at their booth, nearly buried in hats! 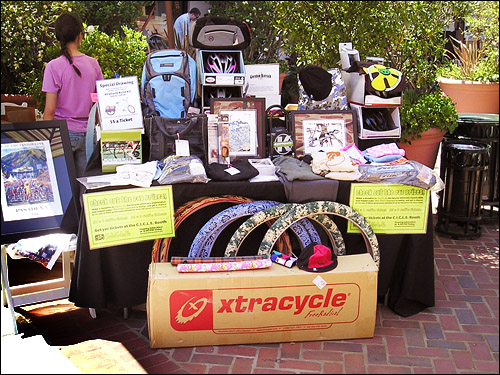 The table of raffle prizes (which naturally included a pair of Classic Wool Knickers!). 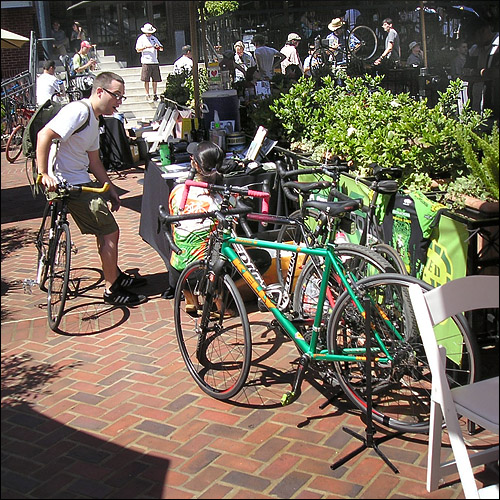 Bicycles and amiability go together. 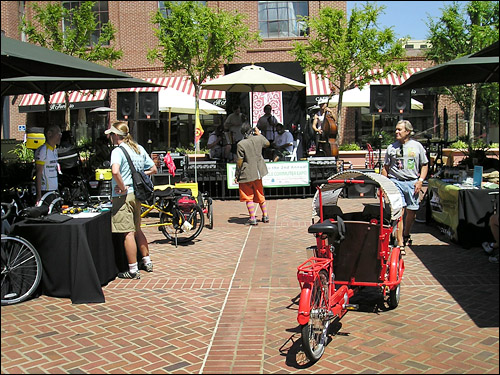 A bakfiets was there from Bucket Bike; folks were taking turns giving each other rides in it. 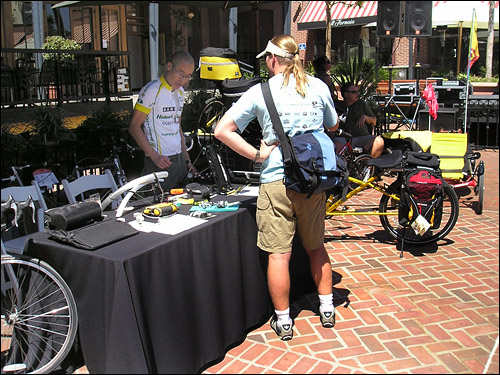 Claude Willey and Scott Sing at the Helen's Cycles booth. 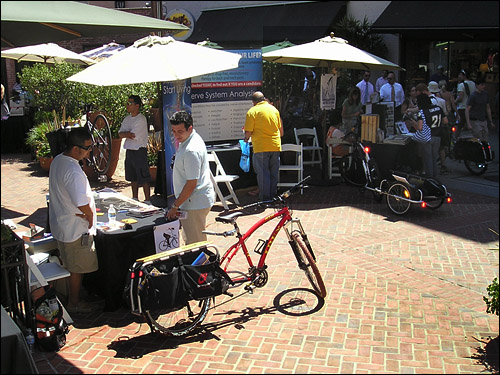 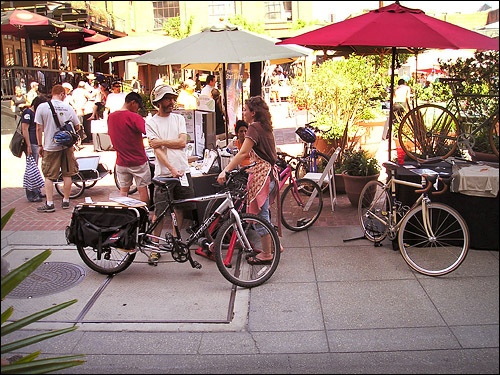 A good crowd despite the heat.

Chuck Schmidt of Velo Retro showed up, as did Harv and Josef from the Bike Oven; framebuilder Greg Townsend had a booth; and everybody was happy despite the heat.

A good day for bicycling and for California, I would say.

Monday, May 12th
The Melbourne Miracle
Melbourne, Australia, has done what the sticks-in-the-mud say (as they always say) couldn't be done: they have converted a typically dreary autocentric grid city to a delightful, pedestrian- and bicycle-friendly conglomeration of street villages bustling with radiant life (and profitable businesses).

Mass transit, bike lanes, carfree streets, public squares, mid-block alleys full of shops and cafés, and happy people wandering about everywhere under their own power, meeting, greeting, and enjoying life. Makes you want to go there right away.

Or see it with additional commentary at Streetfilms.org

Sunday, May 4th
But Is It Art?
Grant Petersen once described bikes as "movable art that can just about save the world." Maybe that sounds a bit fanciful, but maybe it really isn't....

Today I rode a nice sixty or sixty-five miles in total, rolling out to Pasadena to meet Chuck Schmidt's Rose Bowl Vintage Ride; at the halfway point, my friends John and Brian arrived, and afterwards we rode home together, stopping at The Coffee Table in Silverlake for a bit of refreshment. I hadn't expected to stop anywhere (except Beantown in ultra-safe Sierra Madre), so I hadn't brought a lock; when we got to the coffeehouse I just leaned the Bambina against the wall where the free newspapers and bulletin board lived. I thought she made a pretty picture there , so snapped the below: 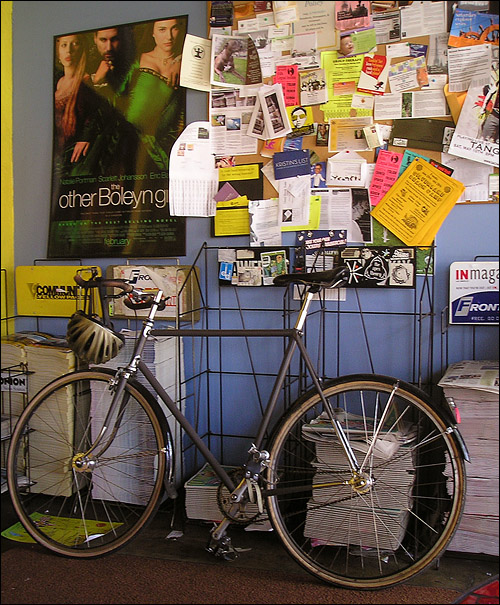 That led me eventually to think, Can bikes, plain or fancy, really be art?

Interesting because through most of Chuck's ride I had been talking about classical music with Charles, one of the regulars and a programmer at a classical radio station...so can a bike compare to a sonata, let's say?

If art is a work, crafted by the hand or mind of a human being, that can expand you beyond yourself by your experience of it, then let me dare say that a bicycle is as much a work of art as a poem, a song, or a painting--or a sculpture or a great building. That it is practical (in this case as personal transport) does not make it any less so.

The Bambina was very good to me today. Plain though she may be, she is certainly a work of art by any functional definition.

Thursday, May 1st
Knicker Socks Back in Stock! 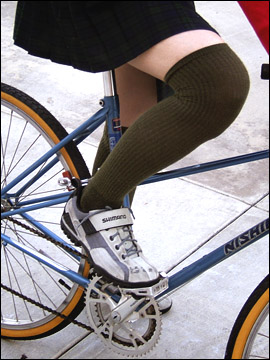 Our knicker socks are back in stock as of today, and we have added the Olive color to the Large/XL size--by popular demand. Price has gone up slightly (though not much; the U.S. has, unfortunately, nearly ceased to mill yarn locally, and the dollar dropped since our last order).

These are the only game in town if you want genuine knicker socks without a loud pattern on them. As before, they come well over the knee on most people, are thick enough to wear into snow weather, yet not so thick you can't wear them on most summer days (the wonders of wool), and they look dressy, yet are tough. You can wear them over tights for really cold weather, and still look sharp while everyone else rolls around resembling a sasquatch.

Need some now? See our knicker socks page. Get 'em while they last!