Bicycle Fixation Weblog
Home » Archives » April 2012 » This Is More Like It!
Sunday, April 29th
This Is More Like It!
I rode all over the Westside today, from Brentwood to Temescal Canyon to Santa Monica to Culver City. While in santa Monica I dropped in at the Main Street farmers market where fellow bike advocate Eric Weinstein holds court most Sundays, and he tipped me off to a new section of bike path along the Expo Line. So (since I'd been complaining about said Expo Line's bikeways last week), I detoured a bit to take a look. 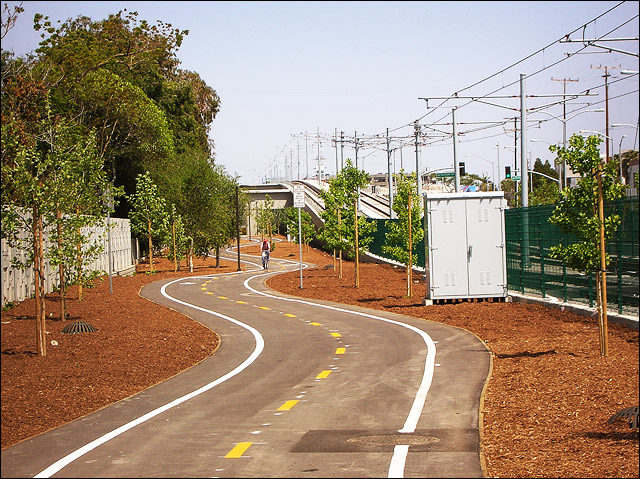 It's not officially open yet, but neighbors had pushed their way in, as had numerous cyclists (including, of course, me), so there were people happily walking and pedaling along it, often heading to the nearby Expo Line station for a free ride (Metro traditionally offers free rides the first weekend a new rail line opens).

The path is wide and smooth, well-marked, and fragrant from the bark chips that mulch the trailside plantings. Access points seem fairly elegant, though it's a bit hard to tell as they're still cluttered with chainlink gates and construction debris. There is a clear connection to a Culver City bike route, which itself has good wayfinding signage (something LA is just beginning to work on).

However, the connection to an earlier stub of path where the trail crosses Jefferson is not entirely lucid, and said stub leads directly to the very confusing intersection at La Cienega, which I've already complained about.

All in all, though, it looks pretty good for a Los Angeles bikeway. I don't know how far west it will retain this quality--it becomes a narrow onstreet bike lane heading east at La Cienega--but if the city (or the county, if Metro built it) can use this as a model for future bikeways, where there's room, we'll see a great many more Angelenos tempted onto two wheels real soon.

I look again when it's finally open to the law-abiding public.


Wednesday, April 25th
Offsite Blogging LXI
At Orange 20 this week, I revisit Santa Monica's new Main Street bike corrals, and find that even on a cold dank weekday, they're still bringing in the business. See Meanwhile, Back at the Corral.

And at Flying Pigeon LA, I describe yer editor's Sunday ride and wonder why everyone isn't out there, in The Unpower Ranger.


Sunday, April 22nd
Earth Day Ride
The day dawned cool and gray and pretty much stayed that way for me on my Earth Day Ride, as I never strayed too far from the coast. Bicycle Fixation HQ is in the Miracle Mile, about twelve miles from the sea; from there, I pedaled over to Crenshaw Boulevard and headed south. 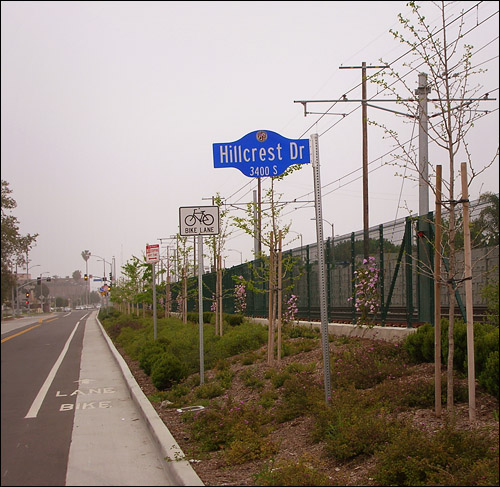 On the way to Crenshaw, I rode the new Expo Line bike lanes, which are a bit narrow but do have the advantage of actually existing. Even saw a couple of cyclists zipping through the mists, as well as a train (non-revenue; they're still testing the tracks and signals).

Then it was south almost the full length of Crenshaw, once a center of LA's Black community but now quite the melting pot, with Koreans in the north, Black folk in the middle, Vietnamese and White folk in the far south, and a fair bit of mingling of Black, Brown, and White all along its length. 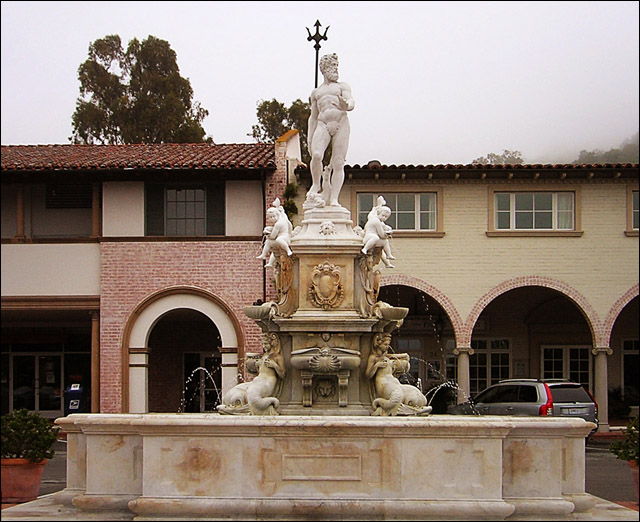 Said mingling did not continue once I crossed PCH and rode up to Rolling Hills Estates, land of horse barns and five-Range-Rover families. Climbing into the drifting mists and ecupalyptus groves gave me a good little workout, and on the way out--after I'd passed the numerous "All Bicycle Laws Enforced" signs--I detoured briefly to Malaga Cove to amuse myself with the slightly audacious fountain that graces an otherwise totally whitebread upscale stripmall. A few classic references can excuse any number of hyperlactating mermaids, it seems. 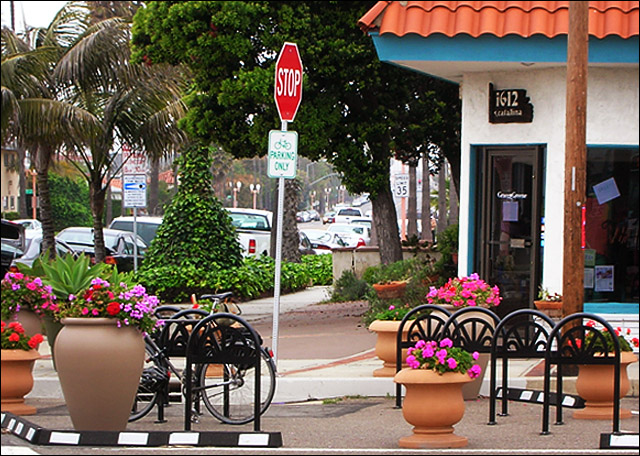 Then, joy of joys!--I discovered a bike corral in Redondo Beach, and a nicely done one at that. Since I wanted coffee, I took advantage of it immediately, while swarms of roadies, who of course banish the Kryptonite from their kit, rode blithely past it. I don't doubt that had the day been other than dank and gloomy, there would have been a few more bikes locked there.

After my cuppa, I descended to the Marvin Braude bike path, the famous one that runs along the sand, and pedaled on to Redondo Beach for a walkabout, then Playa del Rey for an omelette, and finally (after a stop at the Bridge, of course) home, for a sweet, invigorating, and carfree Earth Day ride of around 50 miles. Which is little different from my non-Earth-Day Sunday rides, but...

Wednesday, April 18th
Offsite Blogging LX
Of course, this week's post can be about nothing other than CicLAvia, not just the greatest bicycle event that takes place in Los Angeles, but the greatest event of any type! Massive participation, good clean fun, rediscovery of the self and the city, and just plain happiness all round. Plus, it's good for business...you could ask little more.

So click on over to Orange 20 for a pre-CicLAvia primer, titled Only the Beginning, then switch to Flying Pigeon LA for a paean to the day itself, called Once More, with Feeling. (And with pictures.)

Sunday, April 15th
CicLAvia Again!
Rode CicLAvia again today...that's LA's take on the famous ciclovías of Bogotá, Colombia. Theirs has been going on for nearly forty years; ours for but two. But you've got to start somewhere!

And started we have: despite Los Angeles being the Ground Zero of Carmageddon, the "Sultan of Sprawl," as I once called it, it seems that its denizens are not so totally car-addicted as legend (and propaganda) would have it. Attendance was expected to be in the six digits again, and nary a frown was sighted, at least not by me, as I rode from all four main hubs--South LA, Boyle Heights, the central plaza, and East Hollywood--and traversing my favorite part, the Fourth Street Bridge over the river and railroad tracks, some six times.

On the way I met up with bike pals and fellow advocates Josef Bray-Ali of Flying Pigeon LA, Severin, and Chris Kidd (the latter now working in Oakland), and a few others. And took a few snapshots, which you'll see below.

A beautiful ride, a beautiful day, and a city whose beauty was visible at last during these few car-free hours....

Wednesday, April 11th
Offsite Blogging LIX
What are we talking about on those "other" blogs this week? Let's see....

At Orange 20, we give a short history of CicLAvia (the fourth iteration of which is coming our way this Sunday), and a photo of gesticulating politicians.

And at Flying Pigeon LA, I take a look at their northern neighbor South Pasadena's latest bike lane, and their plans for many more.

Thursday, April 5th
CicLAvia Returns to Los Angeles
CicLAvia, LA's take on the open streets pioneered in Bogotá, Colombia, nearly forty years ago, is returning to the city for its fourth iteration on April 15th. Once more, miles of streets in a notoriously car-crammed conurbation will be cleared of heavy metal to make room for people cycling, walking, running, dancing, or just standing around enjoying the quiet of real life, LA's often-stunning Art Deco downtown, and the company of their fellows. 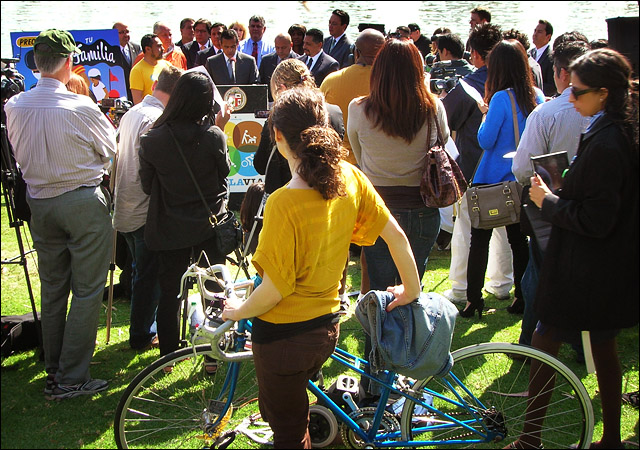 Los Angeles being a city of self-promoters, there was of course a press conference, which yer editor attended, happily surrounded by fellow cyclists, politicians, media mannequins, and just plain folk fired up by memories of the happiness the last three street openings brought to the city. Our ever-dapper Mayor, Tony Villaraigosa, introduced City Council members, NGO coordinators, and various city staff that had had a hand in organizing CicLAvia--and also unveiled a new PSA, a poster addressing the Spanish-speaking residents of LA, reminding them to be careful around cyclists, because "your family also rides a bike." 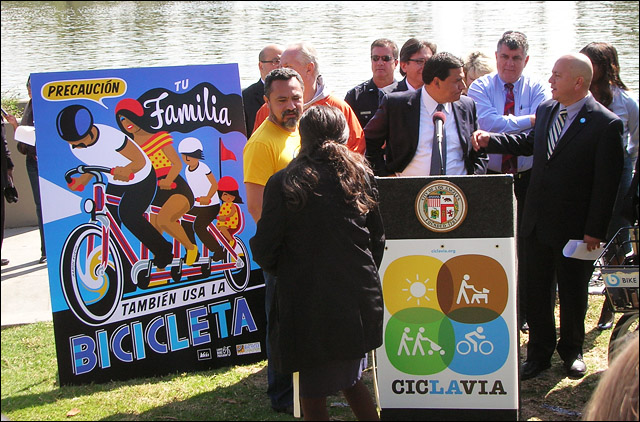 In truth, the speeches were (mercifully), pertinent, clever, and short, and everyone, from the functionaries bound in their dark grey suits to the Real Rydaz lowrider bike crew from South LA, felt relaxed and joyful--perhaps in anticipation of another few hours of the city's biggest and most inclusive party, soon to come.

Several speakers noted that merchants are also gleeful with anticipation, many having reported record crowds at their establishments during the last CicLAvia. In a city where neighborhood commerce is often neglected in favor of the megacorporate chains, this is good news indeed--and the speakers went on to state that dollars spent during the ride largely stayed within the city's economy, turning the ripple effect into the tide that lifts all boats.

For photos from the first three CicLAvias, see the Bicycle Fixation Flickr page:

Wednesday, April 4th
Offsite Blogging LVIII
Two more today on our Wednesday Roundup of posts I write for other folks....

Orange 20 features Loopy for Green, a look at LA's newest road marking, a stencil showing cyclists where to pose their bikes to set off traffic signal detectors and give themselves green lights.

And Flying Pigeon LA looks at Progress in Pasadena, as the Grande Dame of LA County towns gears up for the Bicycle Millennium! 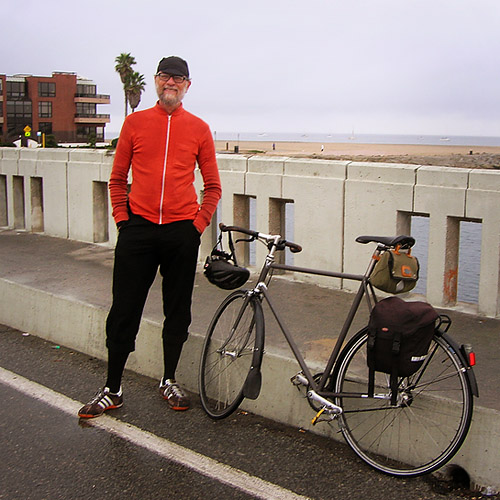 Keep an eye on the website for a new product coming in the next few weeks. We've just started checking with our supplier of merino knits in New Zealand, as well as our downtown Los Angeles factory, to prepare for a run of either T-shirts or jerseys as soon as we can arrange it.

The T-shirts will be lightweight knit merino, of course, with a subtle V-neck that will give them a touch of elegance even if worn alone, for summer riding, and of course they will make excellent base layers in the other three seasons. The cut will be, but will not look, cycling-specific, and the samples have been among the most comfortable shirts I've ever put on my back, as well as sharp-looking.

If we do the jersey (with luck we'll be able to do both), it will be a mandarin-collar version of our beloved Four-Season Jersey, aka the Ninja Road Warrior Hoodie. But without the hood! I've been wearing the sample for years now (the recession interrupted our plans to release it), and have practically worn it out; there's nothing I've tried that comes close for comfort and versatility. I'm wearing a sample in the photo.

Either one is a must-have for those of us who want to Look Good, Feel Good, and Ride Happy!

Meanwhile, if you don't want to wait, check out our shopping cart for current inventory! The hat, knix, and sox you see in the photo are all available, as are special wool cleaners, bells, and T-shirts.