Bicycle Fixation Weblog
Home » Archives » March 2008 » Back to the Bridge
Sunday, March 23rd
Back to the Bridge
Having had a good workout or two last week in rides requiring the negotiation of hills, I decided to be good and lazy on my Sunday ride and go--of course--to the beach! Hey, it's springtime in California, after all! So I saddled up the Bambina, my Bottecchia fixie, and headed down Jefferson Boulevard to the Bridge at Playa del Rey, then back along the Ballona Creek bikepath. And for once I did not forget my camera!

So here are a few pix from the ride: 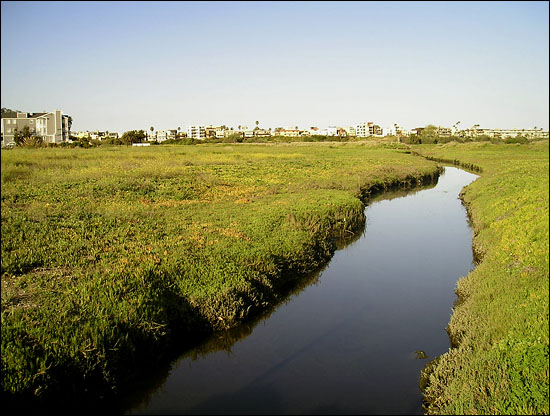 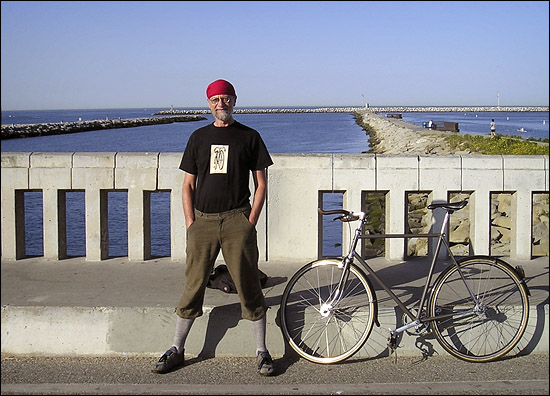 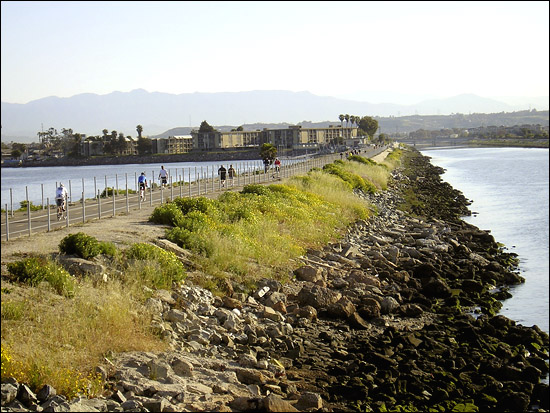 The Bike Path, looking northward from the Bridge 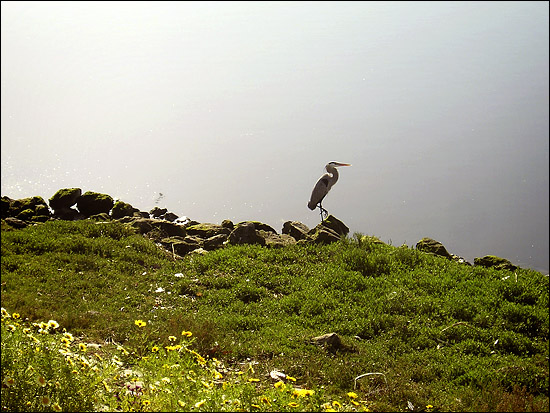 A blue heron in the creek channel

I hope spring comes soon to you, too, wherever you are. But get out and ride anyway--it's always good!


Saturday, March 22nd
More Institutionalized Anti-Cyclist Bias....
Disturbing though sadly not surprising observation by Bob Mionske in VeloNews, reporting on the horrific crash in Cupertino a couple of weeks ago--when a deputy sheriff, who had been reported speeding and driving erratically earlier, fell asleep and crossed the double yellow line, colliding with three competitive cyclists on a training ride, and killing two of them. Says Mionske:

...safety is seen as the responsibility of the cyclist--witness the growth of mandatory helmet laws while distracted driving and speeding remain accepted behaviors--and when a cyclist is injured or killed, blame is inevitably shifted from the driver to the cyclist. [...]

And guess what? It happened again last week in Cupertino. In reporting the crash, the San Jose Mercury News exhibited the sort of media bias that I've discussed in Bicycling & the Law. First, the Mercury explained that "The opportunities for hill climbing and downhill coasting along Stevens Canyon make the road tempting for cyclists." This is a twist on the attitude that many non-cyclists share: "What were cyclists doing there in the first place"? Would the Mercury have explained why an automobile was being driven along that road? It seems doubtful, and yet it seemed perfectly reasonable to the Mercury to report that the road is "tempting" to cyclists.

What came next is all-too familiar to cyclists: The Mercury reported that "The group collided with the deputy's car." In other words, even though they were riding on the right side of the road, single file and in the bike lane, and the deputy had crossed the double yellow line before going off the road and up an embankment on the other side of the road, the cyclists collided with the deputy, in the eyes of the Mercury News.


Read the entire article on VeloNews: Questions about the Cupertino Crash 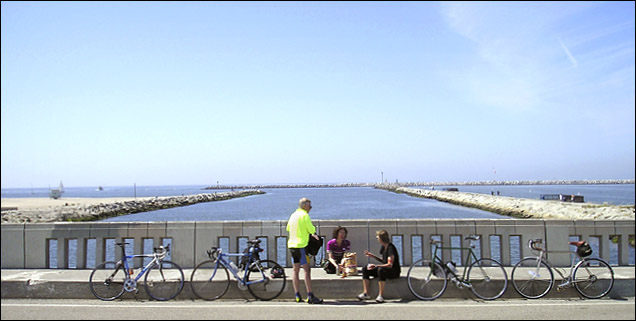 We took a little break from our labors yesterday and rode down to the bike bridge between Playa del Rey and the Marina del Rey to meet up with a couple of friends...Bill Mendell, who has been riding up and down the beach path for thirty years or so, and Rook Campbell, former bike messenger and ex-pro-racer turned PhD candidate at USC, whom we met at one of the many coffeehouses we infest all over LA. Gina saddled up Vivian, and I took the not-quite-finished Green Gopher out for a spin, and we rolled along quiet side streets till we came to the Ballona Creek bike path that would take us down to the beach. 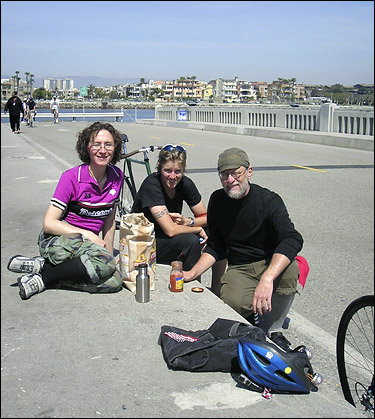 Gina, Rook, and Rick stuffing their faces (photo by Bill)
It was a delightful day, some of the best weather Southern California has to offer, and with the rains (such as they were) only a couple of weeks in the past, filled with the colors and scents of sage, lavender, and daisies all along the route. Birds sang in the oaks and fragrant eucalyptus, while ducks quacked and coots shrieked in the brackish water of the concrete-hemmed creek. Pelicans were plenty as we neared the beach, and we saw a young egret barely an arms-reach from the bike path.

Bill had brought a bag of tortilla chips and some salsa to the bridge, so we planted our butts on the curb and had us a good old picnic right there in the middle of all that sky and sea, while dozens upon dozens of cyclists rolled cheerily by.

In fact, as often happens at The Bridge, a friend of mine rolled by, Steve K., serial knicker buyer and daily cyclist, riding his titanium Litespeed set up as a beach cruiser!

Later on, my friend Mort came by (in his van, poor fellow), bringing his video camera, as we'd promised to help him out with a small project he had. So Gina and I got to stand in front of his camera and try to look angry and concerned while a blue sky rang overhead, the sea rippled, and brightly-clad bicyclists whirred by. It required more skill than we may have had, but I hope Mort got his shots.

After eating way too many chips, we said our goodbyes and rolled for home.

There are few better ways to welcome spring back to the world than on a bike.

Thursday, March 13th
Awareness Test
Wonderful awareness test from Transport for London. Take it yourself, then pass it on to all your driving acquaintances:
Do the Test
Stunning good work! 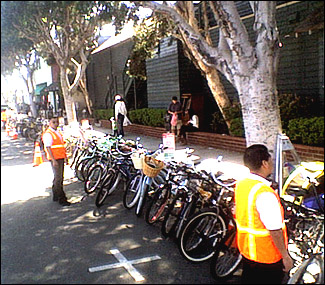 Forgive the crappy cellphone camera picture, but I had typically left my decent pocket camera at home. Nevertheless, I didn't want to pass up this delightful image of the free, city-provided valet bicycle parking at the Santa Monica Sunday morning farmer's market.

It's not just that it's there at all, but that it stretches for half a city block--and it was full!

For that matter, I had a hard time finding a parking meter to lock my own bike to, even across the street.

Most of the bikes were cruiser-type shopping bikes used by local folk--mostly middle-class, boutique-and-bistro types--to get around, along with a few fixies (some of them also with basket) and a couple of road bikes. In other words, mostly bikes used as bikes, not as lifestyle accessories...a sign that we might sidestep the apocalypse after all!

I swipe my card into a metallic kiosk, silently unlocking one of a dozen bicycles stationed alongside it. This vélo libre (free bike)--"Vélib" for short--will be my personal metro. I can drop it off at any of more than a thousand kiosks around the city core.

I toss my briefcase into the front basket, then commit what would once have been a suicidal act: I roll out into the Paris traffic. Taxis bounce past me along Rue de Rivoli like go-karts. Delivery trucks and motorbikes jostle frenetically. Bus engines suck at the warm air. I have steeled myself for the pathological aggression of Paris' drivers. But I soon realize that there are other cyclists in this stream, dozens of us, in fact. Our collective mass has a calming effect on the traffic. I feel intensely awake but not in danger. In this chaos, we are all looking to each other for clues. We make eye contact.

This is just one example of the alchemy occurring on Paris' streets, explains sociologist Bruno Marzloff when I meet him in the 8e arrondissement. "We are learning a new way of sharing the city," Marzloff tells me as we wander the back streets. Sockless in loafers, he moves through the throngs with studied precision. "Look at what happens on a crowded sidewalk; everyone must be aware or we smash into each other. We must choreograph our movements. The result is a kind of dance."

This choreography is now spilling over into Paris' traffic lanes, says Marzloff. With cars and bikes and buses mixed together, nobody can be sure what will be on the road ahead of them. Everyone is becoming more awake to the rhythm of asymmetrical flow. The clincher? Making the road seem more dangerous by injecting thousands of bikes into traffic may actually be making it safer. Bike accident statistics have flatlined, even as the number of cyclists has jumped in Paris by nearly 50 percent in the last six years.

Marzloff and I encounter four empty Vélib stations in half an hour. "We're just at the beginning," Marzloff tells me. "What will happen when we have 200,000 people using Vélib every day?"

Parisians are indeed moving differently, but this new dance is only one symptom of a more fundamental transformation. Changing the way we use city streets may make us happier.

It talks joyously about the experiences of the author and others in newly-pedestrianized urban centers from Paris to Bogotá, and how exchanging cars for buses, bikes, and feet leads not only to more efficient movement, but to happier lives.

Read it all at The Happy City, and pass it on!