Wilshire Boulevard in Los Angeles is the centerpiece of one of the busiest commuter corridors in the US. The corridor includes the nearby Santa Monica Freeway, Interstate 10, but Wilshire itself serves many of the destinations those commuters are crowding towards: office buildings, shops, schools.... 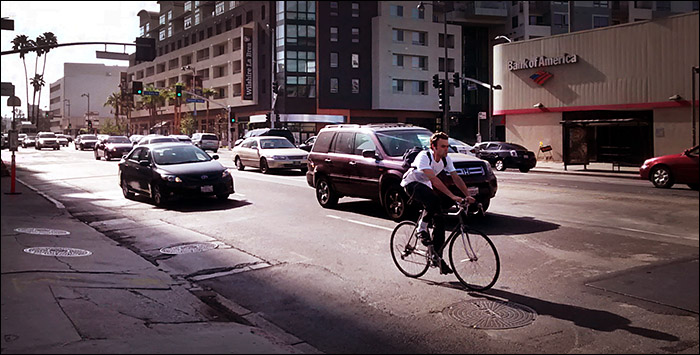 Wilshire Boulevard in Los Angeles is the centerpiece of one of the busiest commuter corridors in the US. The corridor includes the nearby Santa Monica Freeway, Interstate 10, but Wilshire itself serves many of the destinations those commuters are crowding towards: office buildings, shops, schools, and parks and museums as well. It stretches from Downtown through Pico-Union, Koreatown, Hancock Park, the Miracle Mile, the stuffy provinces of Beverly Hills, through Westwood (where it skirts UCLA), through West Los Angeles, to Santa Monica.

Throughout all this long route, so far, the only bicycle amenity one can find is a short bit of bike lane through "Condo Canyon" just east of UCLA, and a scattering of bike racks ont eh sidewalks here and there. Mostly here, in the Miracle Mile, since I live here and have called in a couple of dozen of them.

But that's about to change….

A few years ago traffic surveys showed that Metro's buses actually carried 25% more passengers up and down Wilshire at rush hour than all the private cars put together. So, in an entirely unexpected display of good sense, LADOT decided to build a dedicated rush-hour bus lane down the length of that long street, as far as the border with Santa Monica—and in fact to make it a shared bus/bike lane, at least for those busy hours morning and evening when parked cars are shooed away to let commuters through.

Of course there were "issues": Beverly Hills didn't finish its planning for the lanes in time to apply for the grant that's apparently funding them, and the residents of the aforementioned Condo Canyon wrestled their council member into submission (easy to do when you're wealthy) and made him oppose the project for the mile or so between Beverly Hills and Westwood. They were afraid that their entry into the street's legendary traffic james might be delayed a few seconds by a passing bus.

This opposition was based on nothing more than ignorant stupidity, but that plays well in LA, especially, as I've said, when the idiot in question is rich.

But good sense and a love of cleaner air won out as far as the eastern border of Beverly Hills, and the lanes are already built through Koreatown.

Now they are coming to the Miracle Mile, which sees lots of bike traffic, but which unfortunately sees most of it on the equally-busy sidewalks, where it is decidedly incommodious.

Here's a crew hard at work, just around the corner from my apartment: 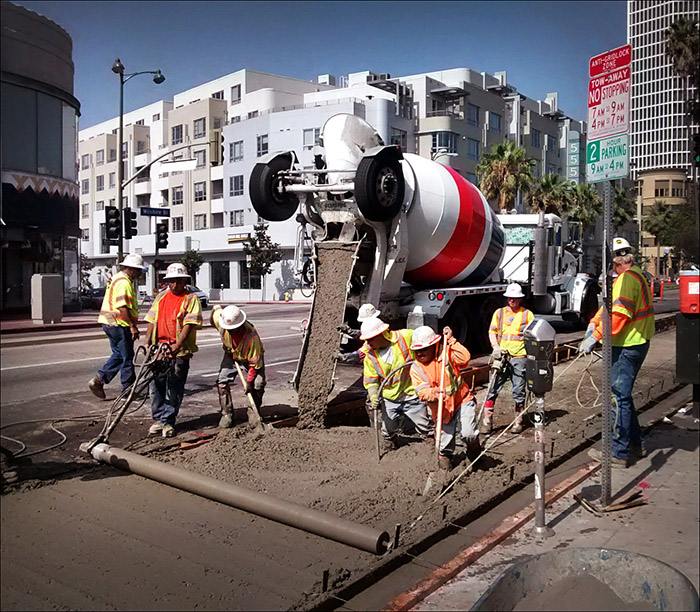 Can't wait to try them out! With the subway coming soon, and Sixth Street a block north tentatively scheduled for a road diet with bike lanes, the Miracle Mile will soon be LA's transportation paradise.

Note: This post originally and erroneously stated that Beverly Hills opposed the bus lanes, when in fact the city simply didn't bother to apply in time to be included in the project grant.