Went on another Tweed Ride last Sunday, and passed the afternoon surrounded by people wearing clothes that they believe hearkened back to a vague period between the ascension of Queen Victoria to the British throne, and the end of the Jazz Age. Although Tweed Rides.... 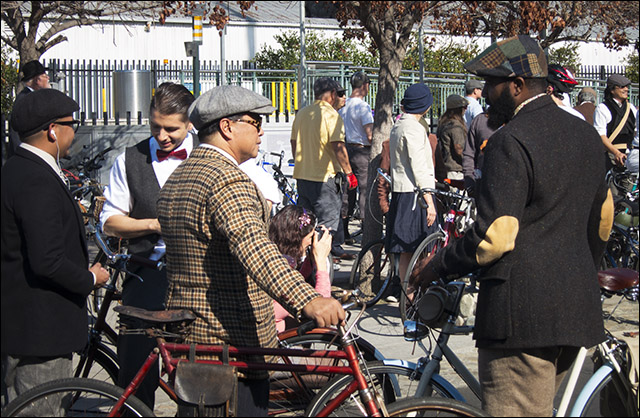 Went on another Tweed Ride last Sunday, and passed the afternoon surrounded by people wearing clothes that they believe hearkened back to a vague period between the ascension of Queen Victoria to the British throne, and the end of the Jazz Age.

Although Tweed Rides began as a conscious reaction to Lycra racing kit culture, I find it amusing that it feeds on the same underlying desire: that of dressing up in semiotic costumes. Impractical ones as well, at least on this ride, when the temperature was 85°F.

This is one of the constants of human culture: even functionally Paleolithic tribes who live naked in rainforests still wear things: they may not cover their genitals nor indeed much of their skin at all, and they have no need of protection from the weather or from industrial workplace hazards, but they still dress up. Penis gourds, bones and feathers, paint and string: no matter how skimpy a people's material culture, a good part of it is dedicated to costuming.

Even my own typical ensemble of black and dark gray, conceived as an anti-costume, is a type of costume. Of course.

I have a friend, a collector, who owns fifty bikes of various vintages—and the correct jerseys to match, be they embroidered wool or imprinted spandex. He also wears the correct shoe for each bike, though that sometimes requires nailed-on wooden cleats.

Everywhere in life, people wear special clothing for "special" tasks, which are often not really special. Motorcycle clothing is accepted without a second thought, as are yoga clothes. So is the "business suit," though its restrictions have been proven to reduce the wearer's productivity. There are special hats that Christians wear only during Easter services. Hasidic Jews wear heavy gabardine coats meant to ward off Baltic winters. Many mechanics wear coveralls (though when I was a professional motorcycle mechanic I never did.) Hipsters have their skinny jeans, squares Bermuda shorts. It's a silly human trait, but it pervades all our cultures without fail.

So why in cycling has it lately been Lycra bike togs that we have singled out for scorn? "Ride in everyday clothing!" is the new battle cry.

However: everyday clothing—especially the late Victorian everyday clothing beloved of Tweed Rides—is itself costuming. And certainly to early feminists, the exigencies of the bicycle—the necessity to breathe while pedaling, nearly impossible in a corset, for example—were seen as a benefit. The freer clothing required to ride instigated a loosening of the severe dress codes Victorian women were subject to, and was seen as a way to bring greater political and intellectual, as well as physiological, liberty to women.

Yet now "practical" bikes are often defined as those that let people, and in particular women, ride in impractical clothes such as high heels and tight skirts—styles whose purpose is the physical hobbling of females, and their objectification…just as in the bad old days! Not as bad as bustles and corsets, but still not the best.

I myself do wear "regular clothing" exclusively when I ride, largely because I want pockets and I prefer not to stand out too much more than I already do in everyday situations. I put the term in quotes because I generally don clothes I designed myself and sell on this website, made to accommodate the physical exigencies of riding a bicycle. Most "everyday clothes" were designed to wear while sitting still in a chair or standing still in a presentation room. Riding a bicycle is physical—and of course that is one of its greatest benefits!

Even walking more than a couple of blocks is more physical than office wear can tolerate well. High heels or stiff leather shoes pinch your feet, ties and jackets strangle, and many people who walk to work (or to the subway or bus stop) wear "special" shoes, such as sneakers, and change into heels at work, or carry the coat and tie over their arm till they arrive at the lobby.

What is wrong is the condemnation heaped by each side on the other, when we're doing the same thing in slightly different ways. Riding bikes, and dressing to play social games.