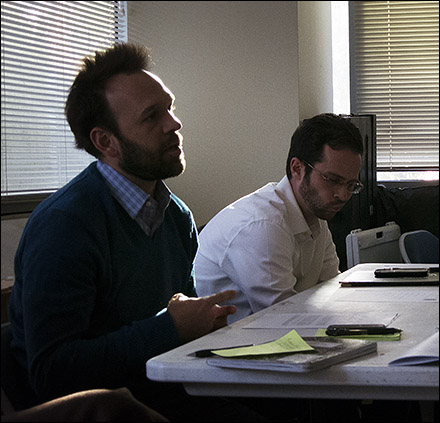 In the past the meetings have all too often been contentious, not only because of people fearful fo the changes opening LA's streets up to cyclists and other non-motorized users might bring, but often because of our own divisions within the bicycle advocacy community.

But I am glad to say that yesterday's meeting was quiet, serious, and mostly businesslike—though, as is the case in any gathering where everyone has an agenda of some sort, the discussion did occasionally wander. (I fear I may have contributed a bit of thematic meander myself, I must confess.)

Anyway, we heard an update on progress in painting lanes, heard a bit about funding programs, and spent most of the time discussing the bicycle-friendly streets plan, more properly called the Neighborhood Greenways network.

Perhaps because for the first time in decades actual progress has been made by our beleaguered DOT, there was less impetus to indulge in outrage or indignation. This is a good thing, so I am glad to report that there wasn't much excitement to report this time around‐the sound of gears turning smoothly, after all, by definition does not stand out!

While there's always more that can be done, and there is definitely much more that must be done, we are moving forward. Los Angeles is becoming a city that no longer quite so stringently mandates that one fire up a motorcar for every displacement, no matter how insignificant.

For this city, that's major progress.